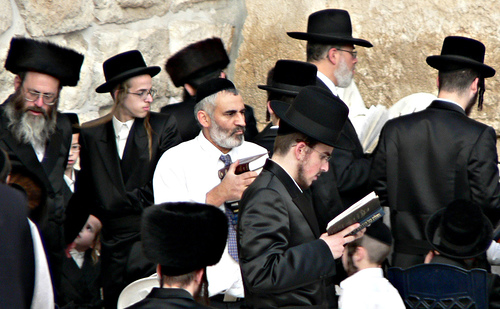 There’s a question that we all know. The one that without fail comes up in every discussion of identity. The one every Jew living in American has most likely heard at least once in their life.

“Are you an American Jew or a Jewish American?”

Essentially, this question asks us, which part of your identity do you put first? Which aspect do you value more? Which culture defines you the most?

Living in Israel the past three months has shown me this question is not necessarily reflective of our own feelings, but rather the context we find ourselves in and how that compares to another context. In Israel, my Judaism is rarely seen as a definitive mark, much like many Christians in America. It is my Americanism that defines me here, in relation to the rest of the population. In America, however, it is my Judaism that defines me, that sets me apart.

But what I have come to realize is that my Judaism itself, the way I practice and relate to the religion, is really defined by my American identity. My Judaism is based on American values: diversity, individualism, and the ability to choose. Most of us as Jews living in America pick and choose what aspects of Judaism we like and want to keep. We look to alternative means to get people involved and find spirituality. Individuals practice how they want.

Israel, however, is different. Judaism in Israel is generally based on the most extreme observance: no public transportation Shabbat, many restaurants are kosher in order to stay in business, Jewish holidays are observed everywhere, and weddings preformed in Israel must be Orthodox weddings. It’s difficult to pick and choose your religion here, it’s really all or nothing: orthodox or secular.

To most Americans this seems extreme, even for a religious country. It seems infringing to have most things up to par with the highest level of observance. Even many Israelis aren’t too fond of the Orthodox community in Israel.

But what many Jews fail to realize is that the Israeli Orthodox community is what sustains not only Israel as a Jewish state, but also American Jewry.

You can’t have one without the other. They are the yin to our yang.

Judaism has evolved over the years in America and many different branches have emerged, each taking different things and leaving out others. Yet, it is the Biblical and Halachic Judaism from which these sects were built. Without these roots of more observant Judaism, where would our Judaism be now? The answer is I honestly don’t know. But one thing to remember is that without roots, what are the branches? Detached, from the trunk and from one another.

Similarly, the Orthodox needs the secular community just as much, because without the branches, the tree is nothing but a stump. The secular or less observant Jewish community keeps the Jewish people connected to the rest of the world. It establishes good relations with other religions, races, and communities. It allows for a sense of diplomacy for the Jewish people so the Jews can assimilate and be part of the world society. With globalization, it is impossible to live the shtetl life anymore, wrapped up in the self-contained communities that Jews once lived in. The Jews need ambassadors, and the secular Jewish Community provides that in Israel, as well as their own communities and home countries all over the world. Both sides allow the Jews to flourish, to grow, and to be a religion of beauty.

Recently, however, there has been a growing rift, especially between American Jews and Israel. The Israeli government paid for advertisements aired on American Television in areas with large Israeli and Jewish populations. These ads showed Israelis living in America with either children or boyfriends who were not culturally Israeli. They showed scenes of Americanized children who chose English over Hebrew, and Christmas over Channukah, and boyfriends who mistook Yizkor candles for romance. At the end, there was a call for these Israelis living in America to return to Israel.

These ads were not well received. And while many Americans took offense to these ads, I think we have to understand that it was not meant to be a blow to American Jews. Instead, we can see it simply as Israel wanting to retain citizens and realizing the need for people to stay in Israel. If anything, we should be complimented by the fact that so many Israelis are moving to America that the government felt they needed to campaign to bring them back. While I don’t think the advertisements sent the right message, it is important to remember the cultural differences between the two countries, and the fact that these ads were made by the Israeli government.

So, before we criticize Israel, or there orthodox community there, think about where we would be without both of them? And where would they be without us?

A tree can’t live without roots, but without branches, it’s nothing more than a stump. And then, what is it good for?

This is a guest post by Leora Goldblatt, a junior at University of Wisconsin – Madison studying Communications (rhetoric) and Middle Eastern Studies. She is originally from Minnetonka, Minnesota but is currently studying abroad for the year in Jerusalem at Hebrew University.  Follow her online on her “Hi from the Holyland” blog.