The author at the Golden Leaf, a cigar lounge on Lake Street.  Photo taken by Peter Brownscombe, February 2014.

I share a small tippy table with a bowl of vegetarian chili and a candle.  Other patrons, except for a nearby woman, sit in duos, trios and quartets behind us on risers with eating counters. I flee from Eden Prairie to the Bryant Lake Bowl Theater for the comfort of knowing that there’s a good chance that I’ll be in the company of sly and off-center storytellers, humorists and revues. The cabaret is linked to a small, bowling alley and saloon/café on Lake Street in Minneapolis. The woman next to me moves off to a table with an unobstructed view of the stage. Another woman, trim and purposeful, futzes around with a camcorder perched on an arthritic tripod.

With no idle social chatter required, all I needed to do was let the performer, Jon Spayde, re-introduce me to some of his invented characters – the Polish Professor of Negativity, Zen Master Zero and a womanizer named Manuel.  They explained why after Harvard, Spayde fell through the grad school cracks at Stanford while backstroking through a boozy haze.  As Jon and his imaginary pals tell it, he was on a quest to earn kudos as an intellectual guerrilla from the likes of, say, his academic advisor and Grove Press.  Spayde’s ordeal was the murky, flitting-about journey of many a student scratching out a doctoral dissertation; of a sensative, liberal arts tourist from the east stuck in the exhausts of money-driven, California-blond, beautiful and bright colleagues.

Even with a well intended but labored bit of audience participation, my hour with Jon and his characters and the chili was splendid.  But my personal muse was humming the Burt Bacharach/Hal David song “Knowing When to Leave.”  She and I like show tunes and this one from Promises Promises provides sound advice for both the love struck and cabaret rats of this world.  I parted the Bryant Lake Bowl coasting on the high of a sharp entertainment for think time at a cigar lounge across the street.

An antique barber’s chair was the only vacant parking space among the Golden Leaf’s armchairs and bench sofas.  Roosting on a kitschy throne with a ten-buck stogie next to gents talking hockey and baseball and with a framed, 1957 Life Magazine cover of Ernie Kovacs hung on the wall behind – all puffing cigars – the setting was harmonically merged to my time with Mr. Spayde’s pals.

Ernie Kovac’s, founding member of the Nairobi Trio, the sly, off-center, visual trickster of television comedy when Ike was president, was the mustachioed, cigar-erect, champion of irreverence that alert high school boys referred to with awe and affection.

I happily ruminated some and enjoyed the nuances of a gourmet stick while the other guys and a few gals conjectured about The Twins and The Wild at levels higher than what one hears in bars that only pour shots and tap beer.  Most were waiting for the 3rd game of The Wild/Black Hawks playoff series to appear on the overhead flat screens.  My cigar served its 40-minute purpose, lasting through the first period and a tied score.  Chicago’s first goal was the precise moment that my muse returned to warbling the Bacharach:

“Go while the going is good,

Knowing when to leave may be the smartest thing anyone can learn.

Departing the Golden Leaf, I smiled at the cheery counter man and a statue of Punchinello, the greeter-doorman for the establishment’s walk-in humidor.   The counter man had selected a fine house cigar for my repose.   Mr. Punch, the iconic mascot of two lines of cigars and the late, great, Brit humor weekly Punch, reminded me of the late playwright and theatrical biographer Sheridan Morley.  Morely was Punch magazine’s drama critic when he treated me to conversation and an equally crispy orange beef entre at a Chinese restaurant near Lincoln Center.

But I was soon out the open door for a stroll through springtime air and Friday night Lake Street brio.  Minneapolis is not Manhattan, Mombasa or Mumbai, but with infusions of immigrants, its ugly artery delivers more spark and color than such car-centric fakes as Maple Grove’s Arbor Lakes complex with its shoppes, fountains and extruded Americana.

I walked by open-to-the-night ethnic grocery stores and beauty shops popping with customers; a wine bistro for young gentry and cafes, coffee, shoe and erotica shops.  I threaded through a sidewalk crowd of 21-year old pups determined to hold their liquor in an over-amped, ersatz, Irish pub and danced past a tattoo parlour that serves lattes.  “We’re not in Eden Prairie,” I advised my muse.

My 9:30 p.m. destination is a venue, like the Bryant Lake, that also provides a measure of counter-culture comfort.  The Huge Theater on Lyndale near 31st Street is an amiable storefront with a black box auditorium and plenty of floor to pace about during and between shows.  The joint pulses with a variety of small improv comedy troupes; some are seasoned groupings temporarily cobbled together from the likes of the Brave New Workshop, Stevie Ray’s or ComedySportz.  Others are … well, hopeful.  But admission is cheap and shows at this artist-owned and operated, non-profit enterprise can be sold out.

I bought a grape soda, found a chair and discovered the Mustache Rangers.  Corey Anderson and Aric McKeown – two hunks upholstered with white T-shirts, fake, upper-lip brushes and bad Etonian accents – mostly sit staring at the audience thinking of things to say from an imaginary spaceship’s control console.   Their whimsy is pegged to audience suggestions.

The Mustache Rangers are the most sedentary improv act I have seen … anywhere.   And that’s a compliment.  Given the all too common, forced, clumsy and un-nuanced slapstick that exposes the comically lame on local improv stages, the Rangers provide contrasting relief.

Their sets are not a game of tag with first responders hoping to rescue the deflated improviser.  Nope, they played badminton – seated badminton.  After their slow opening volley of get ‘em laughing scatological takes, they were fun and appealing, even when they had nothing to say.

“Fly while you still have your wings,

Knowing when to leave will never let you reach the point of no return.

Rather than gamble on a third live show in a single night, I responded to the muse and retreated to my Nissan for the drive back to Eden Prairie and radio play-by-play of the final period of hockey.  While passing through Hopkins, The Wild won it.  A damned fine Friday night: Spayde, a serious stogie, a space ship and a playoff victory against Chicago. 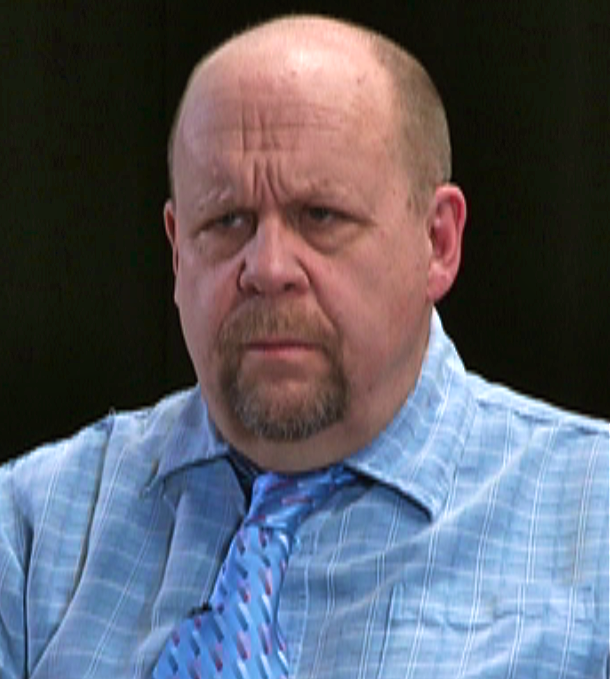 I remain most appreciative of Jon Spayde’s contribution to Friday’s exploratory.  The man has references when others have no clue and little life experience.  He knows science, Zen, art, politics, a half century of pop culture, academia and psychiatry.  He has survived from a time when authors and intellectuals were THE rock stars and twerkers would have been given times out by their parents and booking agents.   I must ask Philander T. Overman, one of Spayde’s characters, what else is to come.  The sooner the better.

Jon Spayde appears at the Bryant Lake Bowl Theater this Friday at 7 p.m.  He has also been a regular on Democratic Visions, the cable access and Internet program I produce out of the southwest ‘burbs.   Spayde has a website that is reveal here.