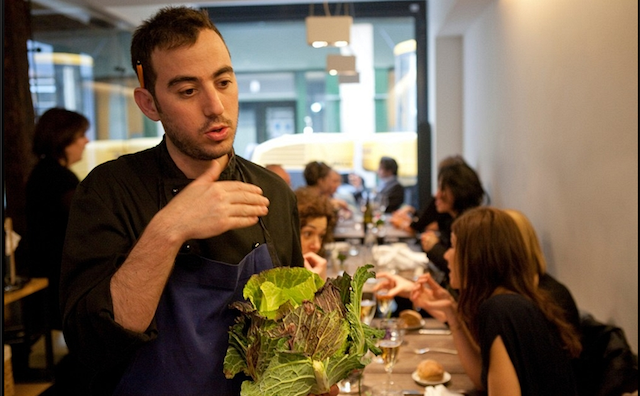 Fine dining wasn’t on the menu, or in the budget when I went to France earlier this month. Just a chance to catch up with old friends, and spend some time with my son, who lives in Vienna. Micha and I stayed with friends, walked a lot, talked a lot, bought baguettes at the boulangerie and sausages and cheeses at the local market. Sometimes our friends cooked for us, and one night Micha made his special chile con carne.

After Micha left, my friend Owen Franken, a Paris-based photographer, invited me to join him for his birthday at a restaurant called Spring. We’d be the guests of the chef, for whom Owen has done a lot of work. 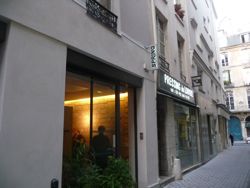 I had never heard of Spring, so I did a little research, and discovered that it’s one of the hottest new restaurants in Paris. The New York Times has raved about it, and The Guardian put it on its list of the city’s ten best restaurants. Spring only has 28 seats, and books up months in advance, but Owen made a phone call, and we had reservations for the next day.

What’s really surprising about Spring is that the chef is a young American, Daniel Rose, who grew up in Chicago, came to France to study phliosophy, and wound up going to a culinary school in Lyon instead.

Chef Rose greeted Owen like an old friend, and we were soon seated and presented with glasses of Champagne. The restaurant hardly looks like a palace of gastronomy – the floors are poured concrete, the walls bare, and the tables, set without linens, barely an arm’s reach from the open kitchen. As Rose alternated between greeting guests and giving orders to the kitchen crew, sometimes in English (“I’ve got three chickens here”﻿), sometimes in French, I couldn’t help thinking of an American diner. 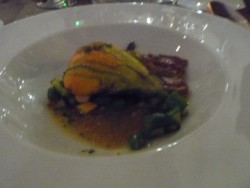 But this was not diner cuisine. Our dinner started with a set of three small plates as hors d’oeuvres — chunks of melon de Charentes, a flavorful cantaloupe from the Loire; a cucumber-like Armenian melon, and thick slices of cured pata negra ham, from an heirloom breed of pigs raised on a diet of acorns in the Basque region of Spain — ranging from salty to sweet to astringent, and from deep red to orange to pale green.

The next course was a single squash blossom, stuffed with a forcemeat of trout and shrimp, served over a slice of crisp bacon from another heirloom breed of pig (this one French), on a bed of haricots blancs and finely diced pistou vegetables — yellow squash and zucchini, and perhaps a hint of basil, in a jellied chicken consomme. 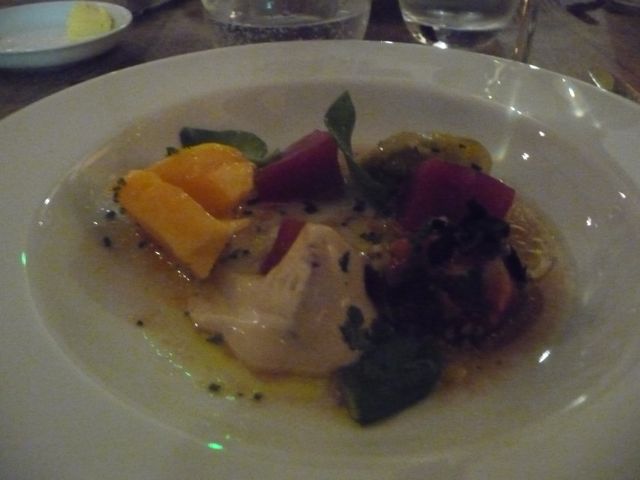 This was followed by a plate of red and orange tomatoes and bright red chunks of very fresh raw tuna from St. Jean de Luz, accompanied by an edible cactus that grows wild near Nice, and then medallions of lobster and breast of chicken, garnished with leaves of wild sorrel. The chicken and lobster, delicate and subtle in flavor, were accompanied by a generous pile of delicious lobster-flavored tater-tots. (I think the server called them pommes de terre dauphinoise, but they looked and tasted more like tater tots. )

The wines flowed freely, mostly labels I had never heard of, discovered by chef Rose and his somellier on their adventures around the continent — Fidele Champagne made from hand-harvested organic grapes, grown on a five-acre property; a Gumphof Sauvignon Blanc from the Alto Adige, a Trockenbeerenauslese from Austria, Spring’s private label Champagne, and more. (The wines are also available downstairs at Spring’s wine bar and boutique.)

It was, in a word, magnifique.

The genius of Rose’s cuisine isn’t simply in the flavors, as subtle and delicate as they were, but it is also in the presentation, the way he focuses attention on each flavor on the plate. The simplicity of the decor is echoed in the preparation of the dishes, and it’s that simplicity that makes the flavors stand out so memorably.

The cost of the prix-fixe menu, which changes weekly in response to what is available in local markets, is 64 Euros — about $90. With wine and tip, had we been paying, it would add up to one of the most expensive dinners I have ever experienced, but also one of the finest. And by the standards of Paris gastronomy, Spring’s prix fixe menu is actually very reasonable. At Alain Ducasse’s restaurant at the Plaza Athenee, or Guy Savoy’s restaurant, for example, the prix fixe tasting menu is priced at 360 Euros per person ($520), not including wines or gratuity.

Photo at top by Owen Franken﻿﻿