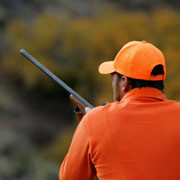 It’s deer season. Nearly a million Minnesotans will buy a deer license and head for a favorite patch of field or forest. About 40% of them will be successful and bag a deer. I won’t be one of them.

When it comes to deer hunting, I have come 359 degrees. I grew up in a deer hunting family. Our extended family hunted the North Shore, along the narrow corridor between Highway 61 and Lake Superior. Kids, cousins and brothers and sisters would line up and drive the deer through the woods toward one or two uncles a mile or so through the woods. The crack of a rifle was, as often as not, the cue that the invisible deer had made it into range and was taken.

Then I was a vegetarian and a pacifist. By my mid-teens, shortly after acing riflery and passing my hunter safety test, I dropped out of hunting. Hunting was cruel, and eating animals was gross. Guns were tools of war and aggression. I probably said some snarky things to my cousins.

Now I see deer hunting as a critical tool in the restoration of native habitat. Two hundred years ago, when the native North Shore forest of tall white pine and coastal cedar was still standing, there were few if any whitetail deer on the North Shore. Instead it was caribou, which happily munched caribou moss.

If the North Shore is ever going to return to its prehistoric glory of tall pines and scented cedar, the deer have to be controlled. These deer eat every white pine and white cedar seedling they can find.

Not too long ago, when state policy makers worked on “habitat,” the primary animals they were looking to help were deer and grouse. It’s great to see the Lessard-Sams Outdoor Heritage Council choosing projects based on “greatest conservation need, Minnesota County Biological Survey data, and rare, threatened and endangered species inventories,” not just on what’s good for deer. We have more than enough deer on the North Shore now, thank you very much.

So if you’re headed out for the hunt, come to the North Shore; we need your steady aim and your taste for venison. And some year soon, I’ll be out there too…I just need my cousins to take me back.