Message to the assorted groups that make up the Peace and Justice community (of which I am a part): this is a time of opportunity to convey your message; but it is long past time to change tactics and strategies.

Today, I attended the demonstration marking the 10th anniversary of the bombing of Afghanistan in October, 2001. A small contingent of demonstrators on diverse issues got an enthusiastic response from motorists on the very busy Lake Street near the light rail station at Hiawatha. The speakers were the usual. I passed on joining the short walk to South High School for the rally. But I was glad I went.

(Attendance at this demonstration might have been smaller than expected due to another Occupy Wall Street demonstration in downtown Minneapolis perhaps four miles away.) 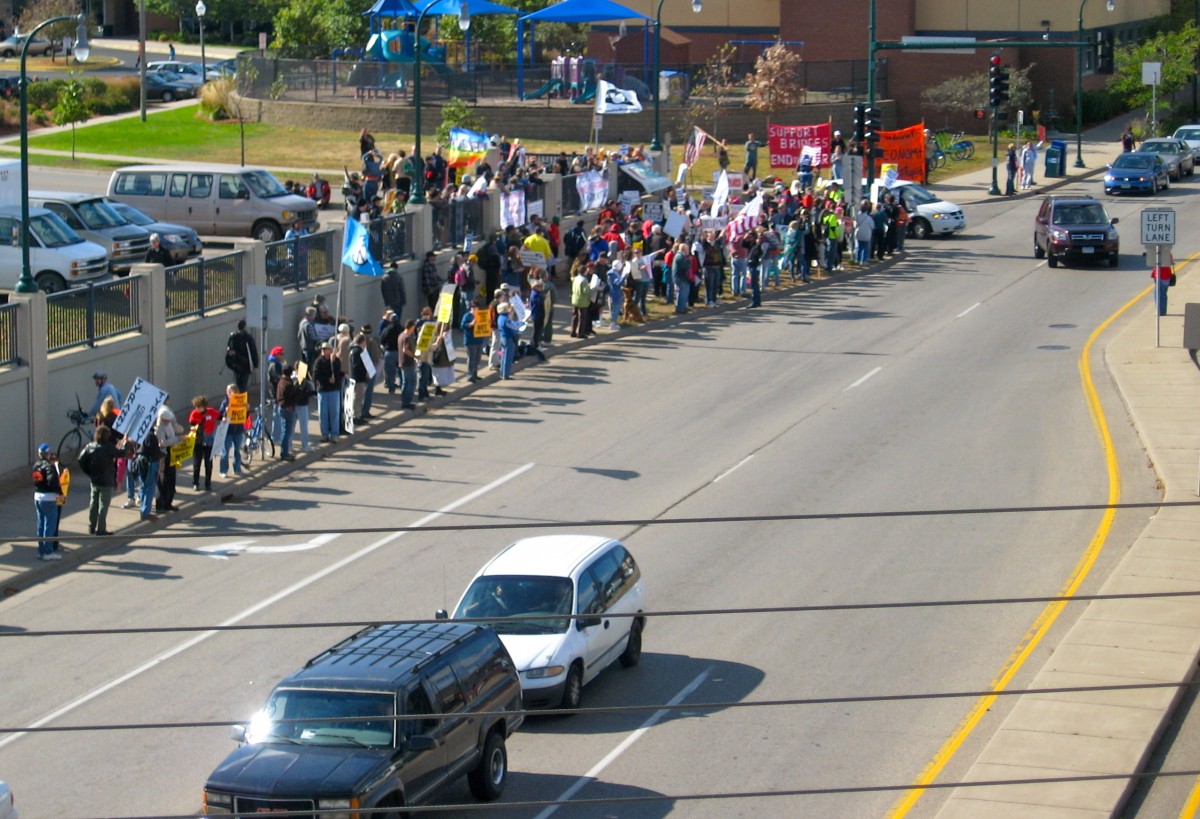 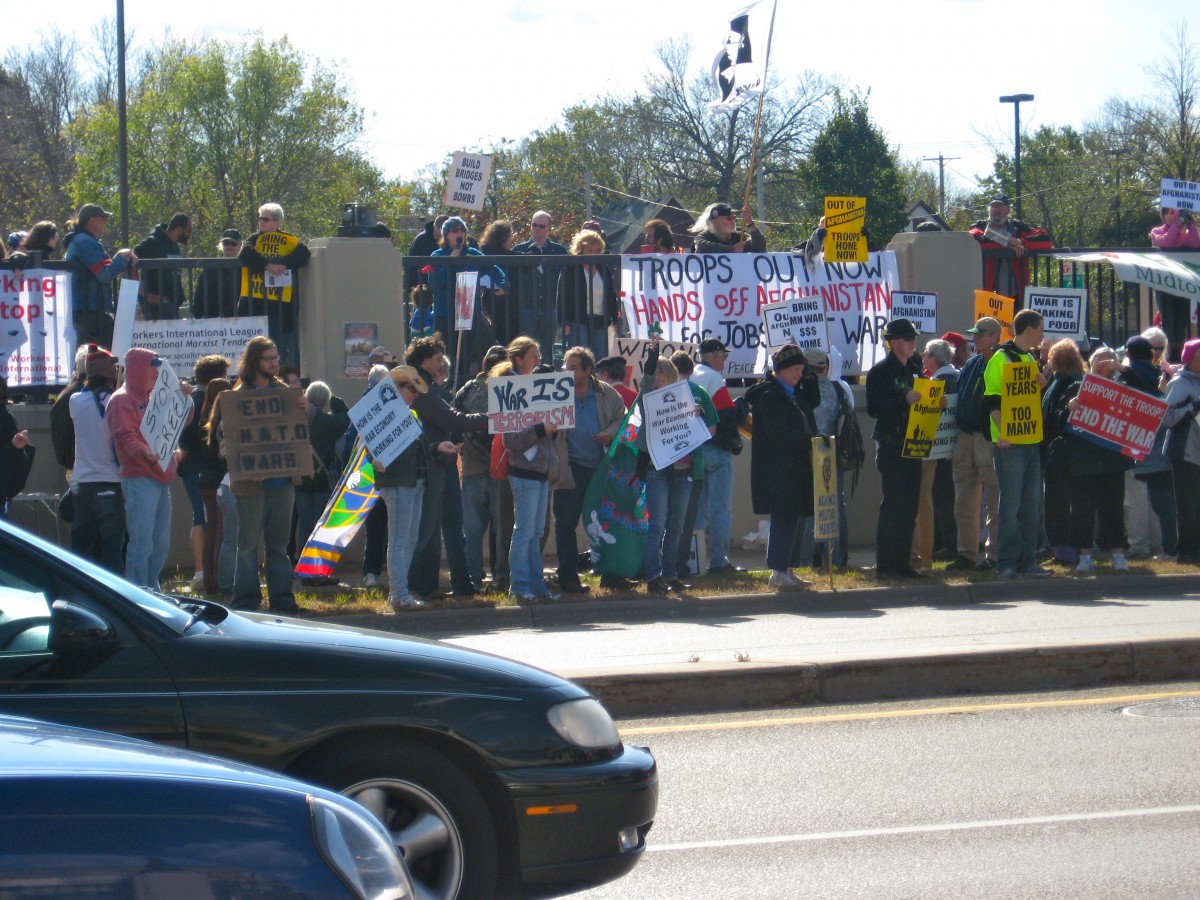 Today’s demo reminded me of the first demonstration I participated in after 9-11. Quite likely it was on October 15, 2001, one week after we commenced the bombing of Afghanistan, with overwhelming support of the American people Afghanistan Oct 7 2001001. As the article shows, 94% of us were quite okay with this violent response, though within that 94% were many varying attitudes about the how’s or why’s of that bombing.

I simply could not see any long term benefit arising from the bombing. It was a lonely spot to be in at the time. But only one of 20 Americans agreed with me.

Ten years ago I wasn’t directly involved in the peace and justice movement in any way. That October day in 2001 I heard about an early evening vigil on the steps of the Minnesota Capitol and wandered over there. The crowd was roughly the same size as today’s. I don’t recall seeing or hearing anyone I knew. Nor do I remember any of the messages, except for the raucous gaggle across the street who were bomb-the-hell-out-of-’em-get-revenge-now-bunch, brandishing flags like weapons, trying to shout out the speakers on the steps. Their ranks included young children. I was to see a lot of those angry-as-hell folks the next few years.

I came home and got actively involved in the Peace and Justice movement.

These days I’m more involved than ever, but chances are many of those activists across the street from where I took today’s photos think I’m a deserter.

These are insane times. Our worship of war and the war economy, along with greed, is killing us. We desperately need to retool: exactly the opposite of going from a peace to war economy in WWII, but with the same positive results: jobs, jobs, jobs; but fewer of the negative: deaths, deaths, deaths. But we don’t seem to be paying attention. Change is very hard….

But I’m not sure that demonstrations like today’s are a good use of valuable resources in bringing about change: our resources are much better spent in engaging with the public.

Today there were no anti, anti-war folks along that Minneapolis street. There were lots of honking cars.

Any survey worthy of the title today will support the idea that Americans are very tired of war. The October, 2001, attitude is long gone. The worry is about survival in this mean economy.

Standing nearby me today was Barry Riesch, Vietnam vet 1969, and a man I greatly admire. He has made Memorial Day and Armistice (Veterans) Day very special for many years. At the demonstration, I matched his sign with my Veterans for Peace cap – I’m a member of Vets for Peace. The cap which goes with me everywhere in my car. 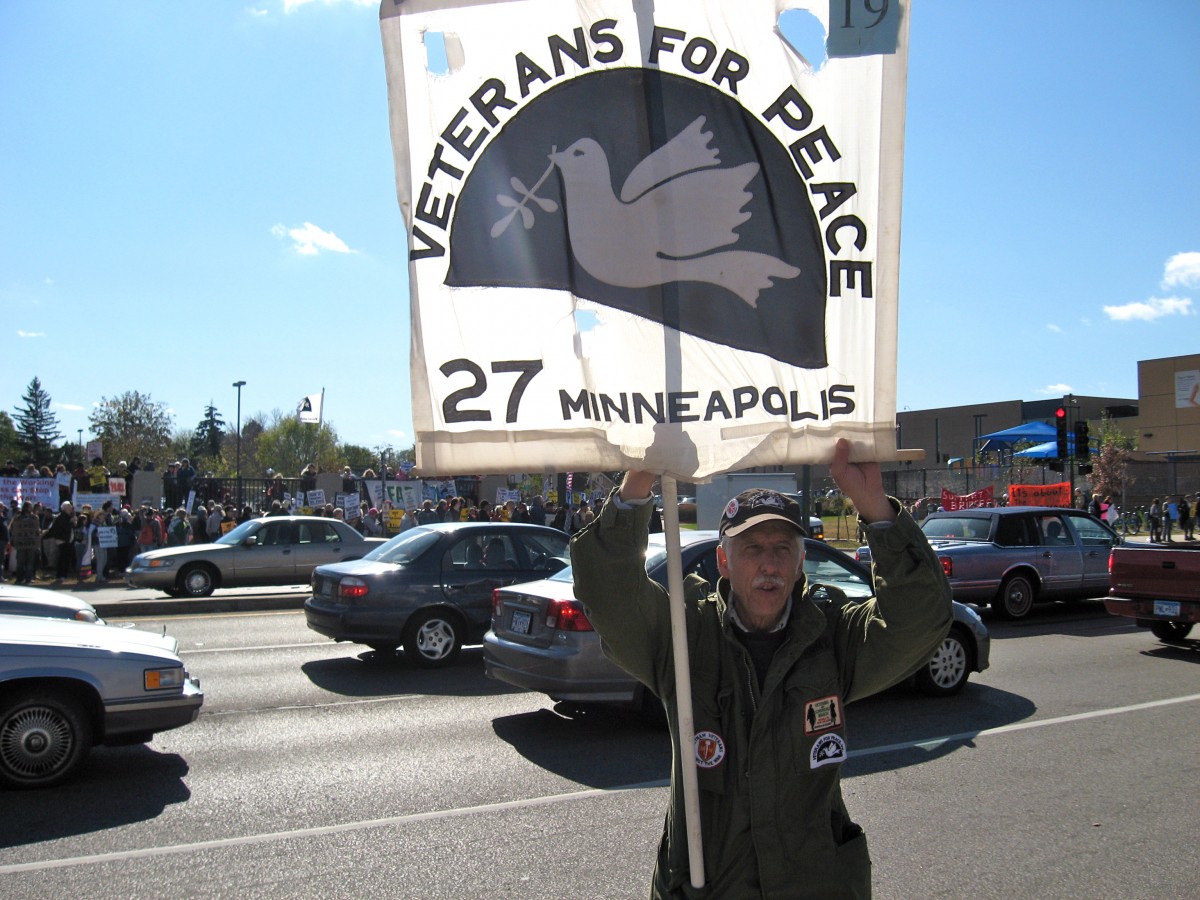 Barry and I know each other, though not well, and he had recently been to demonstrations in Washington DC on the issue of war. He’s been a guest columnist on this blog.

I sensed that he generally agrees with me that the Peace and Justice movements need to get much more involved in true dialogue with those who are searching for ways to become engaged, but are either tired or or not ready to go stand on street corners.

This is a time to personally engage with these uncertain folks who don’t like the status quo but are not ready to get rid of the military or whatever else idealists would want to have happen.

Earlier this summer I attended another demonstration in the rotunda of the state capitol in St. Paul, and made some observations about that group which I feel directly apply to all of us. The blog post is here. The specific comment is this: “I am of the belief that the only effective way for ordinary people – people like myself – to have an impact is one person, one contact at a time. We are so overwhelmed with “information” that there is little left to learn. If we’re going to survive as a society, we need to talk with, even debate, each other, and really listen to other points of view. It isn’t easy – those people standing in a circle yesterday, to have effect, need to turn around and act outwards towards people outside the Capitol rotunda. The only way to do this is to practice honing the skill, be it letters to the editor, standing up in a small or large meeting, giving a presentation, etc….”

As the group marched west on Lake Street yesterday (below photo), I would hope that they are marching into more direct public engagement and true dialogue.

Without such public engagement, there is little hope. 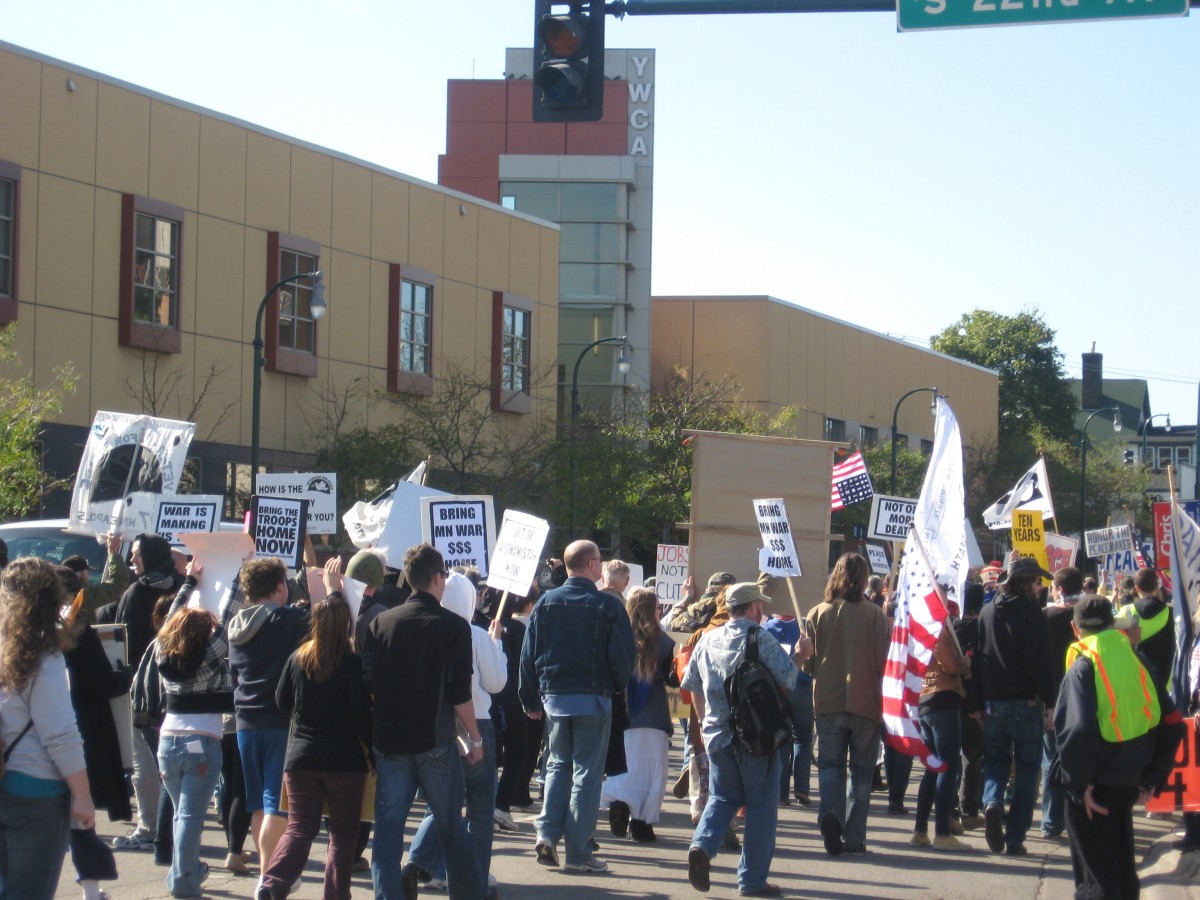