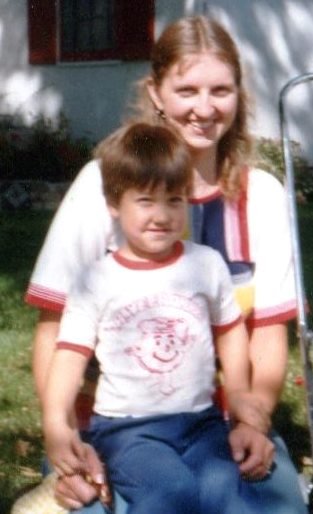 My long-neglected blog is titled The Knothole View – a term that I have always believed originated in baseball referring to fans who stood outside the wood fence and watched the game through the knotholes.   Interestingly, when searching the internet for it today the only thing that came up was my blog!  Exciting, but strange.

My son Jason (or Jay as he is called by most) writes a blog for The Twin Cities Daily Planet called Front Row Seat.  As I was thinking about Jason’s move from The Daily Planet to Minnesota Public Radio, the names of our two blogs came to mind.  I would call it ironic that we each named our blog based on our views of life.  Jason, on the other hand, may disagree on the irony part.  It is true though that the names we chose also mirror our roles as parent and child.

As a parent, one of my greatest joys has been sitting back and watching my children grow.  Holding my breath as they took their first steps, crying some tears as they started kindergarten and again when they went off to college and seeing all of them flourish in their chosen careers, I have loved being there to watch.  For Jason this included watching his early dramatic flair emerge — emceeing the grade school talent show while adding his Bill Cosby routines as fillers, taking to the road to sell light bulbs as a school fundraiser with more flourish than anyone (“Everyone needs light bulbs!”) and taking his briefcase to school in fifth or sixth grade to recruit classmates to join his latest business venture.

Jason has never been afraid to forge his own path rather than follow the well-beaten trail of the majority.   After graduating with his PhD from Harvard, he decided to move back home and start writing in a room in our attic — he really wanted to be a journalist and had the courage to follow that dream.  And within a few short months he had his job at the Daily Planet, a position that allowed him to grow not only as a writer but as an editor.

He also was able to give me the opportunity to be a writer.  When he first suggested that I write a blog about baseball I couldn’t imagine putting my views and feelings out there for others to read. I remember writing one of my first blogs about how little I cared about the World Baseball Classic.  I was shocked to get comments from people who actually read the blog and disagreed quite strongly with me.  Or the time I shared my opinion that the latest Nunsense show  had maybe stretched itself a little too thin and getting a personal email from Dan Goggin, the writer and producer, also strongly disagreeing with me.  Of course sometimes I felt like having Jason as my editor made it worse, with his headlines designed to cause controversy.   But I found myself enjoying the blog and the wonderful theater I have been able to see and write about.  Yes, the feedback I receive is great, but having the support of Jason has made it really special.

And now, as always, I look forward to peeking through my own personal knothole and being Jason’s biggest supporter as he embarks on his new adventure.   And I hope to continue writing for the Daily Planet.  And I guess it’s time to learn about classical music.