I’m thinking of my brother today on Memorial Day.

He was a Marine.

The purpose of Memorial Day is to remember those who died while serving in the military – a noble and worthy holiday to honor those who sacrificed themselves for our country. Argue if you wish with the logic behind some of the wars where so much has been lost. Regardless, the people who died made an unselfish commitment to fight on our behalf, regardless of risk. It is right to honor that.

But not every member of armed forces who dies does so facing an enemy in battle. The military is a machine that runs on the energy of young men and women and their willingness to do dangerous things. And as a result, it chews people up in unexpected ways and for dumb reasons, or no reason at all. Planes and helicopters crash, ships collide, rifles misfire, minds snap and bad things happen. There is carnage on the front lines but also on the bases and on the training grounds. In every case it is heartbreaking and the price is steep. Payment is usually immediate, though sometimes it takes years.

My brother Lee is one of those who paid in installments.

Lee did not die while enlisted in the Corps, but his death and his service are intertwined and when I reflect on his passing I think of him as a military casualty even though he was a 57 and living alone in an apartment in Irvine California at the time – not in uniform, not on a military base and far from any battlefield.

His passing was the result of a Hepatitis C infection contracted over 35 years ago – a consequence of a transfusion of tainted blood from a time long before the more stringent donation screening of today. Hepatitis C remains hidden – there are no symptoms in the early and middle stages so he didn’t know he had it until decades after the transfusion.

Lee needed to receive large amounts of blood because he had been attacked by one of his fellow Marines – an angry brother-in-arms who felt he had been passed over for promotion.

Lee’s wounds were severe and he almost died in the hospital. He was stabbed in the stomach while hiding, using a phone to call for help. His assailant saw the phone cord winding under the desktop and lunged with his weapon. Why? It’s like so many violent things today – there is no logic. It certainly was not the kind of heroic face-off you see in the action films. My brother and those with him were only prepared to shoot with cameras. Help came too late for two Marines, who died on the scene. Three others were injured. 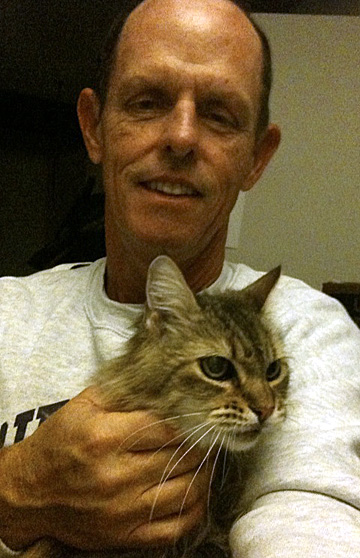 Right: Man and Cat, at home

Oddly, Lee had transferred to the photo lab from a much more pressurized and risky assignment. He had been a Military Policeman, and had he remained one he would have been called on to respond to this attack. You might expect taking pictures to be a safe way to serve out a term in the Marines, but not in this case.

In the years that followed, my brother focused on his photography business and volunteering at the local animal shelter. He remained proud of his connection to The Corps, though he was reluctant to talk about the incident or his attacker. Yet the disease he had picked up as a result of it was already inside, doing its work.

I believe his strategy in dealing with this calamity was simply not to dwell on it. You could ask about his health but my brother had perfected his shrug and he was not interested in examining his personal problems with you. Next subject?

Although his story is not going to make it into a war movie, I think of Lee on Memorial Day, and every day, as someone whose life was changed and ultimately lost because he made a choice to serve.

Who do you think of on Memorial Day?