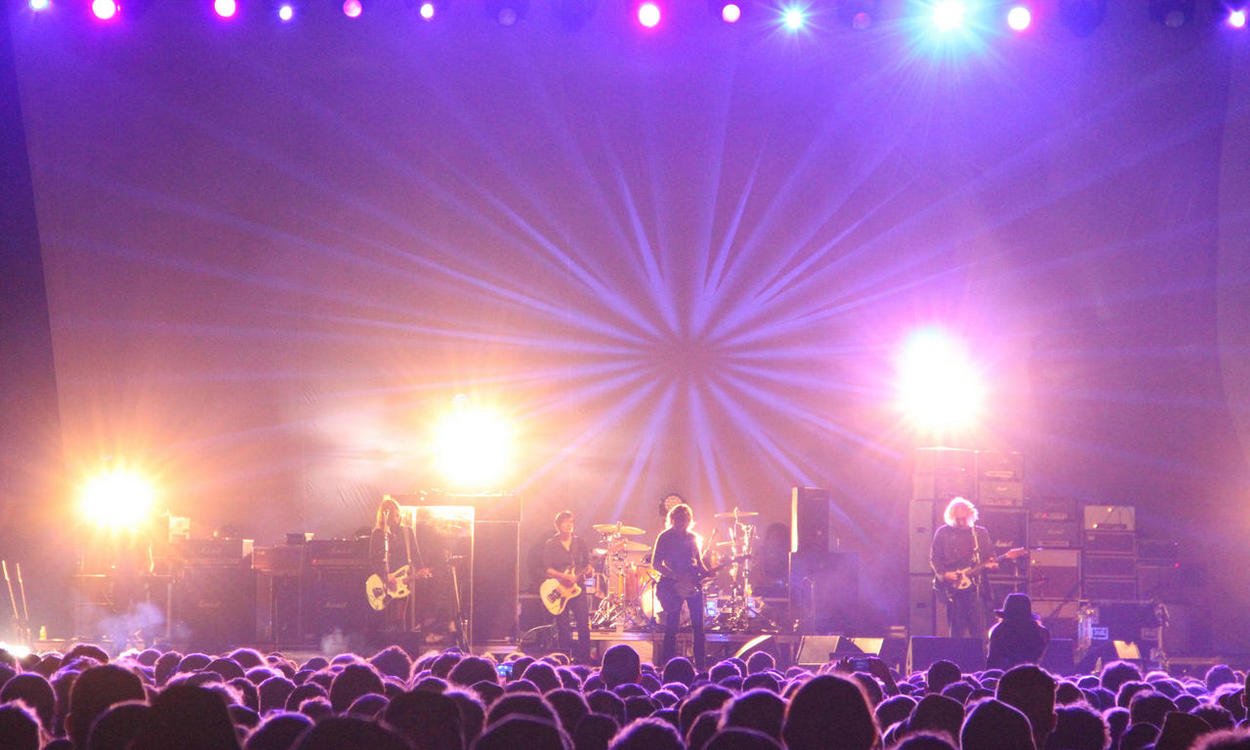 As to be expected, I let my mind wander a bit during the My Bloody Valentine show at Roy Wilkins Auditorium. Given all the sound and fury buffeting me from all sides, I should say the remarkable thing is that I managed to stay out of complete delirium for the entirety of the show. There were many spells, sometimes several within a single song. A MBV song doesn’t really end, it’s just something you wake up from, like a sudden deep sleep. Anyway, the image I imagined every time Kevin Shields would release a sustained feedback-bent howl was a whale in space. More exactly, a whale song in space.

I don’t mean to suggest that there are whales singing “Wonder 2” in space somewhere. I mean that somewhere out there, recorded whale songs are riding an electromagnetic wave of radio signals, all jumbled up with pop radio from a hundred different stations. This epic wail of sound probably sounds a lot like MBV. I don’t mean this as mockery; I mean to say that the sounds coming from the forty or so amps on stage were just that massive and resonant. This is music designed to bridge inner and outer space.

Calling this show a concert feels as limiting as calling MBV “rock music” or even “shoegaze”. With the array of amps, PAs, and microphones set precisely across the entire stage, the whole thing struck me as more like a laboratory for a sonic experiment dreamt up by a sound engineer at the end of a sleepless bender. Kevin Shields, Colm O Ciosog, Debbie Googe and Bilinda Butcher weren’t performing for us as much as they were demonstrating the progress of their research over the last thirty years.

The scope of the MBV project was apparent throughout the evening. Early work from Isn’t Anything and EP’s released pre-Loveless made up half of the set list. These songs, more traditional in structure, sounded strangely quaint when played between the sprawling mazes of instrumentation which Loveless and MBV brought to life. “Feed Me With Your Kiss”, “Thorn” and “Honey Power” all show evidence of the ambitions to follow while still playing within the genre boundaries of their early 90’s peers. The moments when they pushed the music beyond these boundaries remain the most interesting parts of these sonic dreams.

Dancing isn’t really something you expect to do at a MBV show, despite the influence of electronic music on some of Loveless and MBV it’s still all about the trance. Still, with the massive projection screen and intense light show directed at the audience, there was nowhere to look except up at the stage. No one in Roy Wilkins gazed at their shoes, phones maybe, but even that was pleasantly minimal. “Shoegaze” and other psychedelic genres get a bad rap from some because the music is less about the booty-shaking and appears to have a more cerebral appeal. The deeply layered and shifting patterns of My Bloody Valentine compositions mesmerize and entrance like the best “head” music but seeing them perform live is a visceral experience. Your eyes are drawn to the strobes, flares, and repetitive, but synchronized video abstractions. Your ears and attention are drawn through a labyrinth of seemingly simultaneous songs. Just as you think you’ve got the pattern of the song, it is shifted elsewhere, like a darting pool of fish. Not random, of course, but intentional, sensical and somehow inevitable. Maybe you want to groove, because there is immense rhythm driving the wall of sound; but first of all there isn’t really room on the packed floor, and second your body is so intensely shaken by the total volume of the music that it is all you can do to manage to stay standing. You get a workout without even moving. The grand finale of “You Made Me Realise” was a blast of drone and roar that literally shook debris from the ceiling and bombarded the crowd with nearly weaponized levels of sound. This is not exaggeration.

The band kept the show banter-free, maybe because the audience needed a little breathing room between songs, but also because they looked to be engrossed in the technical preparations for each piece. In this experiment, the instruments entail all meanings of the word. During these pauses, people from the audience would yell out things like “Twenty years!”, “It’s been too long!” and “Welcome back!”. I wouldn’t imagine that a twenty year lag between releases was an intentional part of the MBV project, especially given the problems with their labels back in the day, but it didn’t lessen the monumental nature of the sonic parade on display at Roy Wilkins Auditorium. (An unfortunate choice of venue, but probably a requirement given their niche and staging needs.)

Time is distorted within the sounds orchestrated by My Bloody Valentine, beyond the actual extensions of song length, there can be an experience of time dilation, a loss of place and chronology. Vocals can be indistinguishable from guitar whine. One song seemingly becomes two songs that occupy the same frequencies at any given moment This is a strange sort of sonic relativity, where time is bent like the notes of Kevin Shield’s guitar. I don’t mean to sound like a college freshmen who has just smoked pot and listened to Led Zeppelin for the first time. I say this to explain what could be an important part of the grand science that is My Bloody Valentine.

I won’t go so far as to say that they are time travelers. Yet, the line from Loveless to MBV is so short and direct, the path from 1991 to now is so momentary, that there must be something drawing the two ends closer to each other. The audience were on the event horizon with My Bloody Valentine, like a distant traveller in a distant craft, dancing through transmissions that are decades apart, but through a matter of astrophysics are able to be felt and seen as if no time has passed at all.