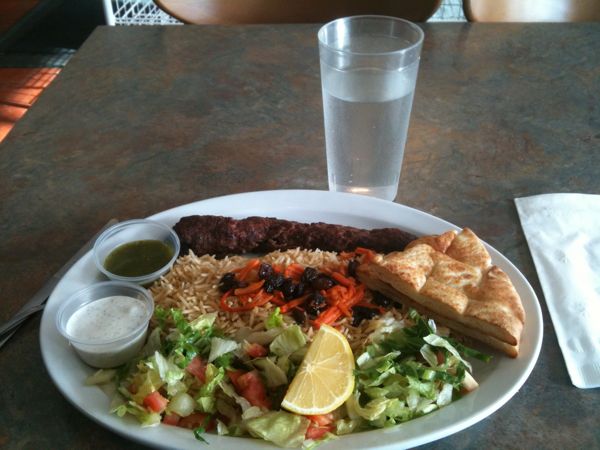 Having an Afghan lunch at the Crescent Moon’s new Como Avenue outpost brought back memories of a different Afghan adventure.

I was 19 years old in 1971, and had just completed my spring term overseas at a university in Normandy, France. A Canadian student had posted a note on one of the campus bulletin boards, advertising for passengers to India in her new Volkswagen camper, a graduation present from her parents. I signed up, along with a French gym teacher named Chantal, and within a few days, we were on the road.

The drive through France, Germany, Switzerland and Italy was uneventful, and I remember little of Yugoslavia. In Bulgaria, we camped in a pasture and were drenched by the heaviest rainstorm I have ever experienced. In Turkey, we stopped for directions outside of Ankara, and wound up as overnight guests of the man we asked, who introduced us to everyone in his village. The next day we stopped at a post office in a small visit, and the clerk disappeared, only to reappear with a tray and cups of tea for all of us. In Iran, a farm family invited us to sleep in their yard.

But the real adventure didn’t begin until we arrived at the Afghan border. There were a bunch of soldiers milling around, all in different uniforms. One of them approached our vehicle and asked for our passports. We handed them over, and the soldier examined them carefully. When he got to Barbara’s passport, he told us that she was very beautiful, and told us that he wanted to tear out her passport photo and have it as a keepsake. It was at this point that we realized that he was stoned out of his mind. We pleaded with him, and eventually persuaded him to give us back our passports intact and wave us on.

After we cleared the border, we stopped at a restaurant for a meal of Kabuli pilau, a savory rice pilaf with raisins, carrots and meat. The chunks of meat were mixed in with the rice, but otherwise it was similar to the rice plates served at the Crescent Moon. I got the shami plate, shown above; but the lamb tikka plate ($10.99) is probably a closer match

It soon began to get dark, and an argument broke out between Barbara, Chantal and myself.

Back in those days, there were two standard pieces of advice that one was given about driving in Afghanistan:

1) Never drive at night. People aren’t savvy about road safety, and if you are ever in an accident, you may be subject to harsh tribal justice.
2) Never stop for the night anywhere but in front of an army barracks or a police station. It isn’t safe.

So, there we were, with night falling, and no army barracks in sight. I argued that we should keep going, while Chantal and Barbara argued that it would be safer to stop. So we pulled off the road, parked the camper behind a sand dune, and settled in for the night.

We were awakened, sometime after midnight, by a somebody pounding on the windows and shouting. I thought we were going to be killed. But it turned out that it was a captain of the Afghan Highway Patrol, and what he was screaming at us was something on the order of “Are you completely out of your minds? You could get killed here!” (I don’t remember the exact words, but he did speak some English.) And he ordered us to drive directly to the next town, where there was an army barracks. Or maybe it was a police station.

It was at that point that I drew the conclusion that Afghanistan wasn’t really a country. There was a government in Kabul headed by a king, that issued postage stamps and controlled the major highways during the daylight hours, but the rest of the time, and in the rest of the territory, it was just like the Wild West, with the territory carved up by tribes.

But that was almost 40 years ago, and I am sure that a lot has changed since then.