A musical map is an interesting concept. What was your aha! moment?
The map was the idea of my publicist [Meghan Pochebit]. I think she was the one who experienced the aha! In fact, I believe she thought of the idea in the middle of the night and wrote it down. I’m really glad she did, too, because the map really emphasizes the fact that my music is deeply rooted in “place,” whether that’s geographical “place” or relational and emotional “place.”

Please describe the map. What do the images and symbols represent? Does each song correlate to a point on the map?
The illustrations on the bottom of the map are illustrations of the particular sound samples I recorded throughout Minnesota. Kids having a wild rumpus, the light rail accelerating past, people talking in a cafe; all these sounds are put into visual form. They are numbered and they correspond to the numbers on the map, which correspond to where they were recorded geographically. The symbols on the left side of the map are symbols that represent different events or, relational or emotional places. They are events that happened somewhere geographically, but only matter because of what exactly happened there. For example, there’s a baby over Hayward, Wisconsin and that represents my niece’s birth. She could have been born anywhere, but what really matters is that she was born, and that event has changed my life.

What artists assisted with making the map? What medium is used?
My friend Emilie Robinson drew the entire map of Minnesota and the city of Minneapolis. She then painted over the map with oil-based paints, I think. She also drew and painted the illustrations of the sound samples. The map started out being about 3 feet wide and 2 and 1/2 feet tall. It was huge! My friend Jeremiah Satterthwaite photographed the paintings and laid them out in some fancy shmancy computer program to make them look super great. He put in a lot of work getting the images placed just right. I love how it turned out. 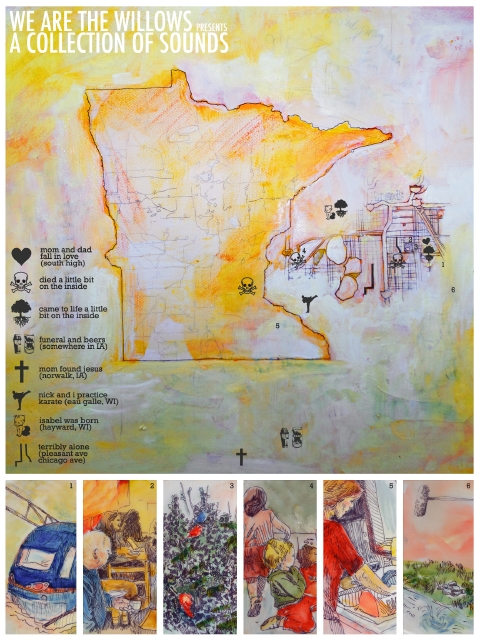 What does the album title mean? In particular, the final clause, “And Something Like the Plague.”
My process of writing and recording this album was really explorative. Most of the time I had no idea what I was doing. I spent a lot of time trying to create interesting sounds or find neat sounds that would contribute to making a really diverse sound texture in the songs. I wanted to have sounds that were not necessarily musical become something new in a musical environment. Reading Albert Camus’s The Plague was really impressive. That book, or the worldview that is expressed in it, seems to make sense of the world to me. In the book there’s this town that gets struck by a terrible plague and people start dying. Every day more and more people are dying. The people in the town are trying to make sense of why it’s happening. Or they assume it will end soon and continue making plans for the future, because they think, “how could something so terrible last so long?” Well, the plague lasts for a real long time and a lot of people die. Then it goes away. I guess the part of the book that’s the most impressive is the state of most of the townspeople. They have a worldview that tells them that the world is supposed to be a certain way. They think the world is a place where pain and suffering ought not happen and that only allows them to believe that it can’t happen forever. In my life experience I have come to a point where I have no idea how the world ought to be. Terrible things could happen to me and I shouldn’t have any reason to believe that life should be different. Great things could happen and I have no reason to believe that life should be any different. All I can do is try and change my circumstances to make my life better. All I can do is try and re-imagine reality to make it something new. With this album, I’ve tried to take all sorts of sounds and create something new with them. I think that process is something like the novel the plague. You find yourself in this mess of a world and you just have to make sense of it somehow.

Your bio describes the sounds collected for the album as being “a tune that can provide limitless resources for creative minds, but can also pummel the creative spirit.” I certainly understand how such noises can pummel, but how do they inspire?
I don’t know that I can quite say what it is to be an artist, but I think part of being an artist is being able to re-imagine the world. When creating, one is turning something that is, into something else, that is. Sometimes, this re-imagining, this creating, makes something quite different and possibly quite more meaningful than the original thing. As I became increasingly interested in re-imagining sounds in the city, every sound was something that could be used. Every sound I’d come across was now understood differently. Not only as what it is, but what it could be. In that way, being surrounded by endless amounts of noise is truly inspiring.

This project appears to be the product of both an excursion into and result of a personal transformative process. In your musical experiment, do you reach a conclusion?
I really have come to a conclusion. I think. Living the last couple years of my life has brought me to view the world differently than I previously viewed it—and recording this album has been a big part of my last couple years. I think the conclusion I’ve come to is one that isn’t necessarily cathartic or the conclusion I’d hoped to come to. But I think it’s the most honest one. I think that the world can be a real big beautiful, terrible mess. And all you can do is make choices to make it the sort of beautiful mess you want to be a part of.