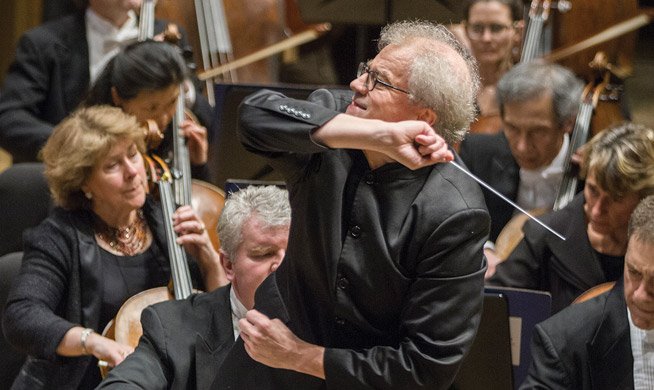 The Minnesota Orchestra’s Shakespeare Winterfest is a wonderful piece of season programming. Using material connected to the works of William Shakespeare provides an often-missing focus to a stylistically disparate body of music, and lets listeners hear first-hand how different composers interpreted the same plays. The varying proportion of Shakespeare-related material in a given concert is a strength, as a whole month of nothing but this music might have grown tiresome – but sprinkled here and there and sometimes concentrated, it works quite well. Larsson’s A Winter’s Tale, for example, contrasts excellently with Dvořák’s more familiar New World Symphony, even though the latter having nothing whatsoever to do with the Bard of Stratford-upon-Avon. The New World Symphony would have been even better paired against Dvořák’s Romeo and Juliet overture, but since the latter work has been lost, it remains an impossible match.

So what about the orchestra’s recent Star-Crossed Lovers program, which focused exclusively on music inspired by Romeo and Juliet? This program sandwiched a suite from Bernstein’s West Side Story between Tchaikovsky’s Romeo and Juliet Fantasy Overture and a new suite from Prokofiev’s Romeo and Juliet ballet. It’s a credit to the composers that each piece sounds nothing alike, except in rich intensity, and they are certainly contrasting works. However, several creative decisions undermined parts of the concert experience.

Connoisseurs of Mexican cuisine in the US frequently complain that the authenticity of flavor declines the farther north one gets from the border. A dish may look more or less the same, but the proof is in the taste. Similarly, fans of Latin music often complain about syncopation, or lack thereof – that music gets less “hot”, with the beat less swung, as the local climate gets colder. The rendition of West Side Story that Vänskä led the orchestra through on Friday night was considerably more squared off than the music should be. It was the musical equivalent of getting handed a chili-less curry in an Southern Indian restaurant; it’s not that that can’t be pleasant, but it’s not at all authentic, and not nearly as good as the real thing.

A different sort of problem arose with the selections from Prokofiev’s Romeo and Juliet. Here, the music was exquisitely performed, but had pacing issues – not from the source material, but from the new arrangement of it offered in the program. Vänskä’s new suite presents a microcosm of the ballet, tracing out the narrative in a clear and chronological fashion, but without some of the lighter music in-between ends up dragging. Many yawns were visible halfway through the suite, and as the climax emerged they were no longer being stifled. Had this suite been presented in the first half of the program, this might have been less of an issue, and indeed may not have been one in the shorter Thursday concert. Closing out a full program, however, the pacing was far from ideal.

The performance of the Romeo and Juliet Fantasy Overture had none of these issues. The work was engagingly rendered, with Vänskä drawing out the rich sensuousness and tentativeness that intertwine in the score. While programmatically it follows a certain logic to start a concert with an overture, this was hands-down the best performance of the evening. It made an excellent lead-in to West Side Story, but would have made an even better concert closer.