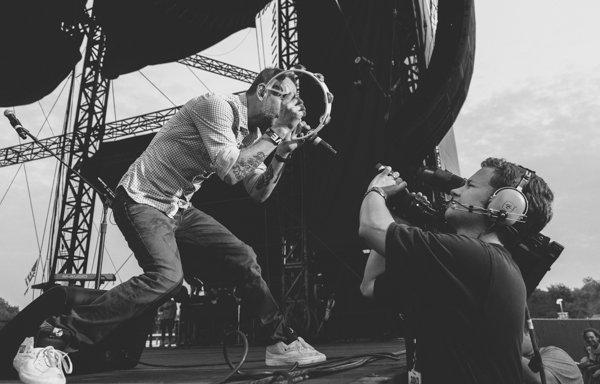 Barb: The first band to perform were the Gin Blossoms. Lead singer Robin Wilson didn’t let a receding hairline stop his youthful excitement and interaction with the audience, mostly in their 20s and 30s. Wilson’s vocals were youthful as well, with a strong, clear voice.

Wilson likes to give away white tambourines to female audience members. The Minnesota State Fair was the first, he said, where he gave one of his famed tambourines to a male, “Because there are no girls up front. I have a lot more tambourines for the girls that want to come up to the stage.”

The lack of female audience members rushing the stage for Wilson’s tambourine giveaways could be because of the low crowd attendance; the Grandstand was about a quarter full.

The sets for all three acts were plain, with their band name displayed on a banner and a series of light displays and minimal smoke machines. At times, the light was so dim, it was difficult to see the instrumentals or the lead singer.

The two large screens on the sides of the main stage were a better way to view the concert if you wanted to see band faces and instruments; in fact, the televised screens were quite creative with their camera shots and fun to watch.

No chairs were available on the Grandstand main floor for the three acts. Brienna Schuette, State Fair Marketing and Communications Manager, said that was because they felt the crowd that attends this type of concert “likes to move and dance around.” The State Fair decides at each performing act what type of main floor to provide: chairs or no chairs, she said.

Audience member Dave Sapp of St. Paul said he was annoyed by the lack of chairs on the main Grandstand floor, his ticket location. Sapp said he complained to Grandstand staff who then allowed him to sit on a balcony chair, normally reserved for those with balcony tickets.

Indeed, there were plenty of balcony chairs for Sapp to choose from. “I have been to many concerts [at the State Fair Grandstand] and I’ve never seen it empty like this,” he said. “It’s sad and these are good groups, all three of them. The advertising was terrible. It doesn’t seem like a concert. All three bands are quality bands. I think it’s an issue of marketing. [Under the Sun] has been a top concert around the country.”

Gin Blossoms’ Robin Wilson said the Under the Sun concert has been on tour for two months (“37 shows in 25 days”) and came to the Minnesota State Fair after a three-day rest. “Those three days off were the weirdest feeling. And now we’re back drinking moonshine with Sugar Ray,” he said.

Guitarist Sean Hurwitz from Smash Mouth joined Wilson and the Gin Blossoms for their hit song “Jealousy” much to the crowd’s delight.

The second act was Sugar Ray who told the audience it has been a long time since they have been to the Minnesota State Fair. Heavily tattooed but wearing a conservative polo shirt, lead singer Mark McGrath joked about when Sugar Ray shirts will be sold in Urban Outfitter stores. “But let’s make some memories,” he said. “You love hockey and I love hockey.”

McGrath introduced guitarist Rodney Sheppard, and talked about Sheppard’s 35 years in the music business. “Sheppard is a wild animal in his natural habitat” while on stage and his guitar solo was a highlight of the Sugar Ray set.

McGrath described how he came to write the song “When it’s Over:” when he was 18, his girlfriend Desiree broke after his heart after he caught her making out with his best friend. “This song is about unconditional love,” he said.

McGrath’s voice was also in great shape despite a cough here and there. Sugar Ray’s song “Blister in the Sun” was a highpoint with the bond “freezing” on stage for a full minute before going back into the song.

The Under the Sun concert title is one of Smash Mouth‘s biggest hits. The Smash Mouth light show was the best lighting of the three acts. The lights were used as a crowd build up before appearing on stage. The concert series goes overseas next.

Lindsay: It was perfect weather for this 90’s throwback concert. I found myself tapping my feet in joy and remembrance, as did the rest of the crowd to such hits as “Hey Jealousy” by the Gin Blossoms, “Fly” by Sugar Ray and “Can’t Get Enough Of You Baby” by Smash Mouth.It was fun to go back to my high school days, I wish more people had the pleasure of attending this uplifting pop rock concert.  Until next time… Go 90’s!