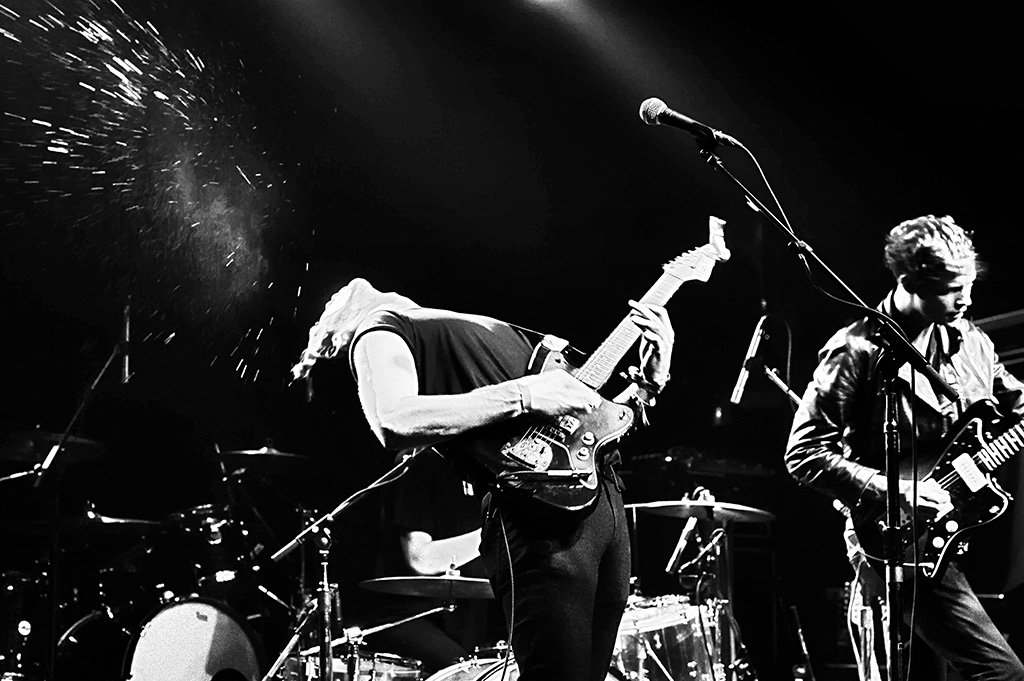 There was a show on MPR a few months ago about the differences between the Beatles and Rolling Stones over the years. Guests exchanged snarks and anecdotes about which part of the British Invasion was the better one. I couldn’t help but thinking this was an interesting but completely academic exercise. You know there were plenty of lads, or dudes, that eagerly switched from one band’s record to another, that would’ve gladly stumbled, drink and cigarette in hand, from one rock show to another.

I suspect that Temples co-founder James Edward Bagshaw could’ve been one of these sorts of gentlemen. On record, Temples sound like a gorgeous tapestry of pop psychedelic highlights. A little heavy on the high-end sound, they recapture and re-invent the dreamy summer of love radio trip in a way that is heavy on content and deliciously low on nostalgia. “Shelter Song,” the band’s single which is getting some nice airplay on The Current, recalls Beatles, Strawberry Alarm Clock, Donovan, and even the Moody Blues. The song sounds new and current, but could fit in pretty nicely with an oldies station mix.

On April 24 at First Avenue, they brought their debut US tour to Minneapolis. This show was originally booked for the Turf Club but was moved to First Avenue Mainroom after they had a much bigger response than was expected. (During the show, Bagshaw quiped that they had a bigger following in Minneapolis than in their home country.) I really like their album Sun Structures, but I is heavy on the high-end, and I was worried that the show could become a boring noodle fest with little to shake the floor under my feet.

I couldn’t have been more wrong. I don’t know if it is the cheap speakers I listened to the album with, or if they changed something with the live show, but Temples transformed First Ave into a massive cave of psychedelic primary colors and swirling all-encompassing thunder. I was mostly sober, but it was impossible to not be drawn into the hypnotic rhythms and deepening riffs and chords. Bagshaw has said that he appreciates the alien influence of Bowie and Todd Rundgren recordings, and there were moments during the show that felt otherworldly and transcendent. They may have a sound rooted in retro sounds, but Temples owns this in a way that amounts to much, much, more than a cover or nostalgia band. Perhaps, in their youth, this band feels much in the music that the original practitioners have forgot or outgrown.

On stage, the band was pretty active with their instruments but kept interaction to a minimum, which is just fine for the trippy thunder they wove for the crowd. Bagshaw had a glam sequin jacket which gave him a bit of unexpected flash. He cites the Doors as another influence, and it there were a few moments in his performance that suggested the snaky locks he shares with the lizard king were not an accident. I didn’t hear much Led Zepplin in their music, but Bagshaw has clearly studied Robert Plants earlier onstage work, too. Hasn’t everyone, though? Keyboardist Adam Smith had the most dramatic look, draped in black from head-to-toe he appeared to represent the nineties Brit-pop contingent. Drummer Sam Toms was mostly lost in light filled smoke, so I can’t say much about his appearance. Perhaps, he was just that ethereal. Co-founder Thomas Edison Warmsley had a pretty non-distinctive look about him, though his well maintained cascade of hair was hard to miss. There were a few moments when he fell “out of character” so I had to wonder if he wasn’t a bit intimidated by the massive reception they’ve gotten here in Minneapolis. Or maybe he just had a bad burrito.

“Shelter Song” was the final song of the encore, and I was happy for it. For some bands, the hit single is just a teasing slice of what they have to offer, and this is true for Temples as well. Songs such as “Sand Dance” and “Sun Structures” delivered such complex flavors that this hit song felt more like a light dessert than a main course. This as a nice way to end, mixing the bitterness of a final bow with the sweetness of a total pop hit. A kiss of color before the aural sun set.

“Drowners,” which sounded very Irish, but said they were from New York, could have easily been described as three hunks and a waifish New Modern dude. They were a tight, energetic four-piece band that recalled eighties and nineties Brit pop and indie bands. They were all over the stage and got a few people in the crowd moving along with them. Minnesota band Two Harbors started the show. They had a good amount of fans in the crowd, and were quite excited to be playing this bill. They had a tight, skilled sound that was heavily influenced by Oasis in particular. Oasis without the Beatles, though. This was an interesting variation, but I had a hard time not hearing Oasis during their entire set and I hoped I would see them define themselves more strongly against their inspiration. Sadly, this never happened.