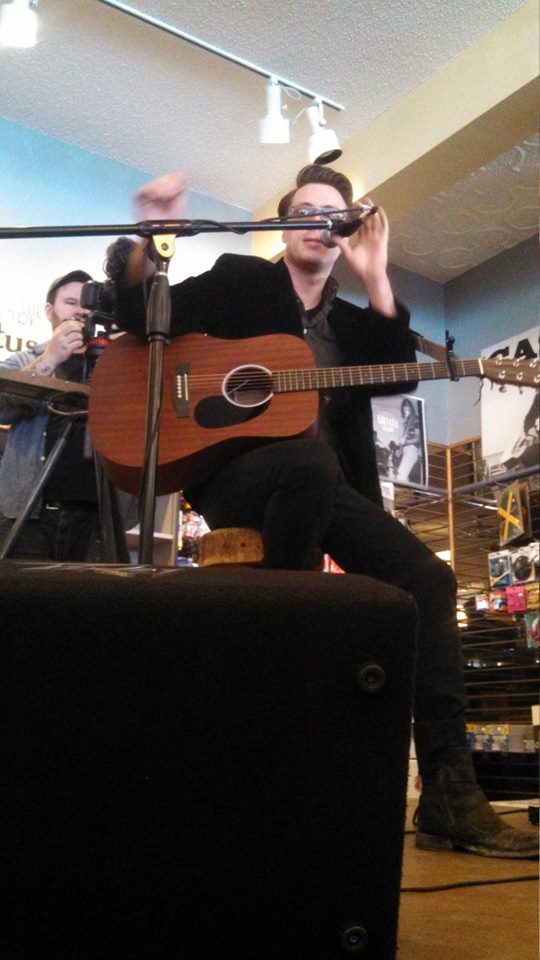 Jeremy Messersmith remarked that it would be great to do all breakfast gigs – then he’d have the rest of the day to mess around. I think more than a few of us would sign up for that morning routine. I can’t think of a better way to start a Sunday than an intimate performance with Jeremy Messersmith at the Electric Fetus and breakfast hosted by the Salty Tart and Peace Coffee.

Messersmith hit every right note. It was just him and the guitar and 200 friends sitting around – kids up front – listening to some tunes. He played a nice mix of new songs and old to an audience that was a nice mix of new and old. It was great to see a young girl ( 5 and a half I overheard) light up when he started to play Tourniquet. And Messersmith thanked us for patiently listening to the new stuff as he needed the practice for some big shows later in the week. (He plays a sold out show Saturday February 22 and a subsequently added date of February 21; tickets are still available for Friday.)  Then it’s over to London before heading to SXSW in March.

I have always liked Messersmith well enough but I really enjoy the last release, Heart Murmurs. There’s a hint of Tracy Ullman’s They Don’t Know in Messersmith’s I Want to be Your One Night Stand, after I heard that that everything fell into place for me. The sound of his songs is upbeat, pop with hints of retro – going back to Ullman in the 80s but also harking back to earlier days of rock. His voice, especially in the sunshine of the Electric Fetus, is so clean and crystal. I prefer him alone with the guitar to any accompaniment, perhaps because as much as I like sound, the lyrics are so dead on.

Each song tells a different story. From the touch of unrequited fancy in Only Dancing, to the tale of enduring fancy through the tribulations of lifelong love in One Night Stand to the striking ambiguity of borderline friendships with potential in Steve. Messersmith played each song as well as songs that get more air play: Tourniquet and Ghost.

The highlight of the show was the sing-along of Violet. Sung in a sort of a round, the audience was sectioned up and each had a job to keep the song going. And despite the morningness of it, we all sang and we all enjoyed it. The show ended with A Girl, a Boy and a Graveyard, which has one of the best lines ever, “life’s a game we’re meant to lose.” OK maybe not the sermon some people use to start their Sundays, but I left thinking that left me pretty open to the sunshine and the day!