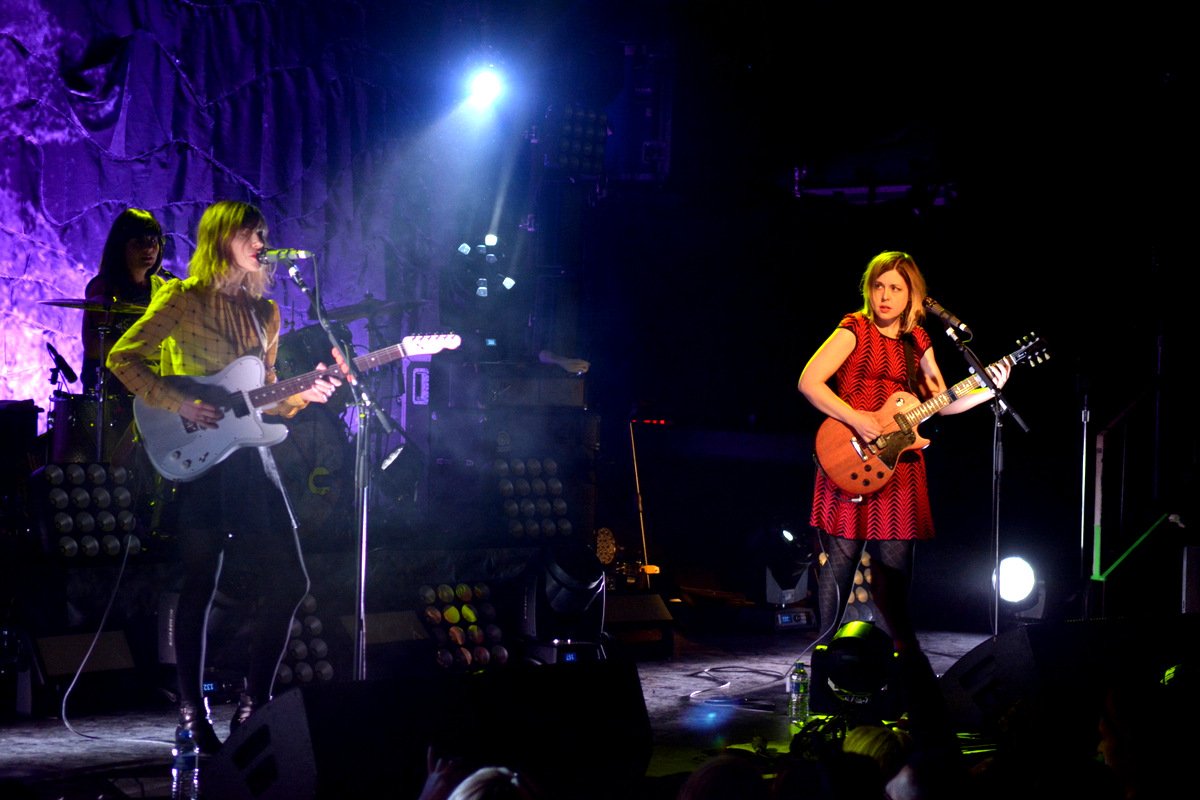 In the 10 years since they last played First Avenue, Sleater-Kinney grew into a legend of huge proportions. During the band’s previous run, it was rare for First Avenue to sell out the main room for indie bands of any stripe. Going to a show there sometimes felt like an act of rebellion; that the band, you and the few brave souls in the room were fighting the good fight – to keep rock alive, to fight for rights, to fight for art. Today, 1500 people line up upside First Avenue for hours in 0 degree weather on Valentine’s Day, waiting for their chance to see a band that embodied that fight. The trio of Carrie Brownstein, Corin Tucker, and Janet Weiss (with backing musician Kate Harkin) made the effort, and the fight, worthwhile.

Stepping into the shoes of their ever growing legend, the band brought a light show and backdrop with them that signaled a step up to another level of performance for them—not just “Words and Guitar,” but now “Sound and Vision” too. That doesn’t mean they’re going into full on Bowie-esque stage theatrics, but it leant a different weight to the evening. At first the blinding strobes and dancing, blowing backdrop (a crinkled paper/tattered rags affair I lack the words to even begin to describe), threatened to eclipse the band’s music. After five songs, any lingering doubts that the show would be more spectacle than urgent rock n’ roll were dispelled. Sleater-Kinney has always been able to make what could be rehearsed stage maneuvers into something that doesn’t feel like performance, but true expression. Carrie Brownstein’s hand movements during “Entertain” are a perfect example of that; the live performances are more animated than the official video. It’s not choreography; it’s an extension of the emotions that power the rest of her performance.

The band ripped through most of No Cities to Love and a dozen songs culled from their previous albums going all the way back to their second release, Call the Doctor. Some of the older songs were played by the trio alone Dig Me Out’s “One More Hour”) and some on some Harkin added embellishments (vital keyboards on “Oh!”). In some ways, it felt like they’d never taken a 10-year break. The current album is a continuation of the direction Sleater-Kinney was going after The Woods. Sure, it incorporates lessons from Corin Tucker’s solo efforts and the other 2/3 of the band being in Wild Flag, but it is fundamentally them. It’s as if they would’ve have gotten to that point one way or another, sooner or later.

The band mentioned their love of Minneapolis and of First Avenue on numerous occasions, and thanked the crowd for spending their Valentine’s Day with the band. This wasn’t pandering—the first time Sleater-Kinney played the Mainroom in 1998, they talked about how much they loved Purple Rain. They were part of a slew of bands coming through town at the time that professed their love for the movie and Prince (Afghan Whigs covered “I Could Never Take the Place of Your Man” and had publicly stated they would be his backing band if he came to the show and wanted to play, Soul Coughing was surprised they had played the Mainroom more consecutive nights than he ever had). Brownstein also speculated that they’d played First Avenue more than any other single venue in their career—“Don’t quote me on that,” she added. Brownstein dedicated “No Cities to Love” to Minneapolis for giving the late David Carr to the world. Carr, whom Brownstein had described at a previous show as a friend and mentor, got his start at the now defunct Twin Cities Reader. The lyrics in the song swirl around the words “It’s not the city, it’s the weather we love” and ends with the line “It’s not the weather, it’s the people we love.” No line in any other song during the show felt more true, more important that that one. Every movement, every note of the night seemed filled with love for performing, love for the self, love for everyone. It was rock n’ roll fighting the good fight once again.

To start the encore, Tucker took center stage with just her microphone in hand and introduced “Gimme Love” by stating about women’s rights “I’m tired of asking. Gimme Respect. Gimme Choice. Gimme Love.” Her impassioned singing and the introduction, reminded me intensely of Eddie Vedder—a friend and fan of Sleater-Kinney. It’s not as if that passion wasn’t there previously in the night, it was just something different thrown into the mix that was extremely memorable and moving. It was also the sort of moment that makes you realize that Sleater-Kinney could be playing larger venues than First Avenue. The new stage set up lends to that idea and their evolving sound is so much bigger than the early years. Weiss and Brownstein reconstructed stadium rock in Wild Flag, so the move to arenas is not as far off as it might seem for what was once just an indie rock/riot grrrl/punk band. We need a band like Sleater-Kinney to be that big. We need them nominated for Grammy’s, we need them to be know to more than just for a small sliver of modern society. We need a crowd of people to sing along with them on “Modern Girl,” like the First Avenue audience did at the show. They closed out the show with the Dig Me Out stand out “In One More Hour.” It was almost too fitting, at the end of the too brief but excellent show for Brownstein to be singing “I know it’s so hard for you to say goodbye/I know you need a little more time” as Tucker sang “I needed it.” It didn’t take too big of a leap to superimpose that Brownstein was the band, talking to Tucker as the audience. If you go there with that thought, it can lead to the sad idea that this might be the last time we see Sleater-Kinney. For now, I’ll just be glad they’re back and as good as they ever were – if not better.

Local rapper Lizzo could be the sort of artist that can help make the ideas and themes of a band like Sleater-Kinney to the masses, if not the music itself. With a live drummer, her DJ, and a photographer, she shook the house. She made the crowd dance, somehow getting the infamously immovable Twin Cities indie rock crowd to sway and throw their hands in the air. The busy and burgeoning rapper gave shout outs to her early collective Grrrl Party, the riot girrrl movement, and brought Babes in Toyland drummer Lori Barbero up to dance during Batches and Cookies and throw cookies out to the audience. She finished with a powerful new song, singing, “You can’t wash away my brown skin.” Earlier in the song I seemed to catch the lines, “I woke up and I felt beautiful/I woke up in my skin.” Her performance was engaging and moving and she does seem destined for better things. That new song would be a welcome addition to the pop charts.