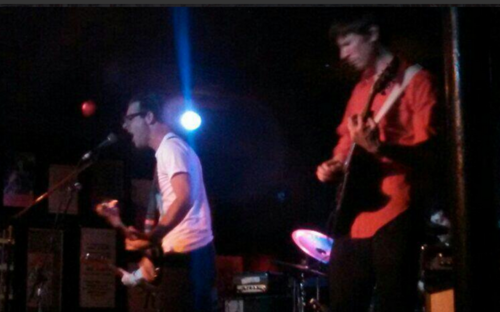 Last Thursday night was bittersweet for me – it was the last night I’ll be in the Turf Club for a while. They are renovating and putting in a kitchen. I’m sure it’ll be worth it but it leaves a hole in the music scene in St Paul. But it was a good night.

The night started with Sea Whores. They are an interesting band. They’re a little noisy (I mean noise genre) – with some serious screech and feedback. They play with the accoutrements of the instruments as much as the instrument – well that’s not really true but there’s a lot of interaction with playing the music and playing with the sound of the music in a good way. And the set started with some show-tune-lounge-type singing against touches of Metallica. Again, super interesting and fun.

I like the sound of STNNNG. They share members with some of the previous bands. I always enjoy seeing musicians in difference roles. I have seen STNNNG before – at the Turf Club. It would be interesting to see them in a different venue. The lead singer was quick to jump to the floor, leaving the rest of the band on stage. Last time I saw them, I think he was close to hanging from the rafters. It’s a lot of moving around but I like their sound.