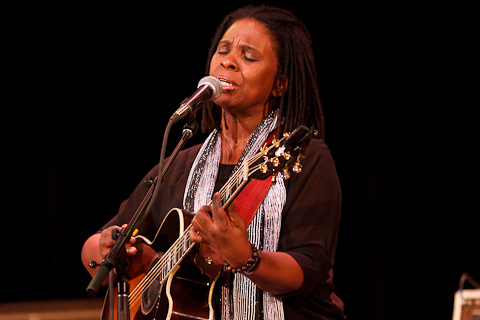 The Take Five Tuesdays Concert Series at the Hopkins Center for the Arts presented another first-rate performance to more than 550 music fans on Tuesday, January 29. Not everyone who came out to see rising talent Ruthie Foster was familiar with her music, but guaranteed everyone left a fan. The stage was setup simple with basically just instruments and there was no special lighting needed as all focus was placed on the music. The room sounded good for the whole performance and remained at a comfortable listening volume enabling you to enjoy the full band sound as well as the more subtle acoustic moments.

The 90-minute, 15-song show incorporated a diverse mix of material revealing the influences that shaped the development of this gifted singer. Foster is a well-rounded entertainer who appears very comfortable sharing her experiences and inspirations with the audience and her love of playing music translates to pure joy for those lucky enough to be on the receiving end. Foster is also a skilled guitarist and was joined by her talented band; Tanya Richardson (bass), Samantha Banks (drums) and Twin Cities own Scottie Miller (B3 organ, piano, mandolin).

The show started out with several of Foster’s uncommon selections of cover tunes: “When it Don’t Come Easy” (Patty Griffin), “Fruits of My Labor” (Lucinda Williams), “This Time” (Los Lobos). Foster showed her Bluesy side on the Bonnie Raitt style “Aim for the Heart” off her current release Let It Burn. Ruthie’s vocal power was front and center throughout “Ocean of Tears” while Banks showed of her creativity drumming with mallets. At the songs conclusion, Foster leaned back and looked up towards the sky, belting out some impressive big notes that had the crowd’s attention and appreciation.

Foster had the audience laughing as she spoke of early influences like Sister Rosetta Tharpe and the band interaction was fun and felt genuine as they played “Up Above My Head.” One of the evening’s standout moments came during “Phenomenal Woman” where you could really appreciate Foster’s silky smooth vibrato which at times resembles Oleta Adams. Foster said, “we’re going to take you to the front porch” for the Southern jam “Richland Woman” during which Banks amused the crowd with her skills playing the spoons. Another real crowd pleaser was Foster’s version of the Johnny Cash tune “Ring of Fire,” which sounded more like a Carpenter’s song with some nice harmonies. The regular set ended up beat with “Set Fire to the Rain” (Adele) and “Full Circle” highlighting Richardson who showed she knows her way around a 5-string bass.

As the crowd cheered enthusiastically while showing their appreciation with a standing ovation, Foster and the band returned for an encore with “Travelin’ Shoes” sent out to “those of you in spirit with us tonight.” Miller was featured with a rich solo on the Hammond B3 and Foster showed a grittier side to her voice, which perfectly matched the flavor of the tune. It was an exceptional night of music and many fans hung around to meet the band and have a CD signed.