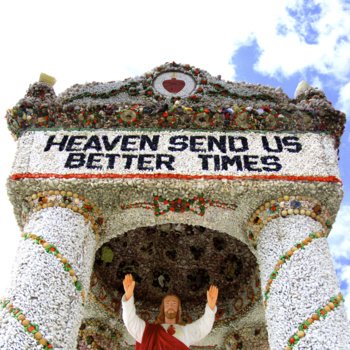 Friday, November 1 the filled-out Ritz Theater in Northeast clapped and sang and watched their kids dance for the album release of the old-time group Roe Family Singers’ Heaven Send Us Better Times.

Though the show was billed for the dynamic, charismatic duo, which for the release expanded to an eight-piece, the night was also a showcase of House of Mercy Recordings, all with their own place at the wide intersection of country, blues, and gospel. Belief wasn’t necessary to enjoy the line-up, which mixed degrees of skill and style, but it can’t have hurt.

House of Mercy Recordings is a wing of St. Paul’s House of Mercy church, which “offers a discriminating blend of high church and low, of tradition and innovation, sincere worship and healthy skepticism.” Their house band Blood Washed Band opened the night with reinterpretations and originals familiar enough they all reminded me of listening to the radio with my grandfather, drinking root beer while he tipped an Old Fashioned.

Billed as an alt-country supergroup, Blood Washed Band’s set was lighter on the alt and heavier on waltzing country, including “Pour Me a Whiskey” from their latest Driftin’ Along.

They’re a talented bunch, but their song selection limited their vocal and musical range. There’s nothing wrong with openers trying to show everyone up with the kind of dynamism that gets an audience out of their seats—I wish they’d tried. Good band, particularly if you’re into gospel country, but I was left wanting more blood.

When they came out to back Molly Maher two acts later, they got dirty. Ms. Maher, who was without her Band of Disbelievers, is rowdy, and brought out rockabilly guitar and confident, worn-and-warm, lived-a-damn-life vocals that blended into something like the grittier cuts from Sheryl Crow’s catalog or the happiest stuff Lucinda Williams has ever penned. She’s on my list of acts to catch headlining.

A gulf separates the two other solo artists, Brett Larson and John Hermanson. Larson does a speak sing thing you hear from John Prine—witty like him, too. Larson’s voice is heavy with everything he’s seen and all the decisions he’s made in his life. His “Xmas Song” is the only Christmas song I’ve ever welcomed, especially outside the narrow window every year I tolerate them for the sake of family togetherness, and my wife not calling me a scrooge.

The new stuff Hermanson played made me glad he came out of his recent hiatus to share. The rust was mostly shaken off by his set’s end, but didn’t really matter, particularly for his reimagining of Jesus and the Disciples hitting the road as a band.

The Roe Family Singers took the night, playing with bursting hearts and the glee of clicking your heels while skipping over brimstone. Their expanded band, including saw and jug, fit together like coffee and bacon, giving them all a chance to grab the spotlight and a few bars to let rip.

Part of what make them such a joy to watch is just to see the next direction they’ll take. Their set soared and chugged and fell inward, with all the revelry and thankfulness of a band of sinners just happy to sneak out another day before God cuts them down.