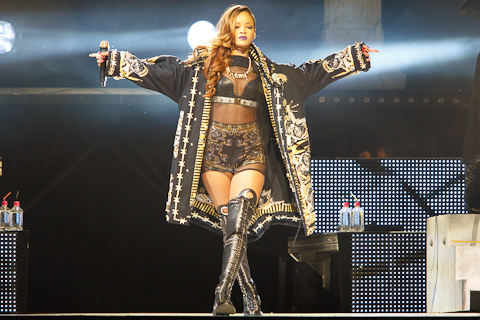 Considering the name of her latest album is Unapologetic, it was a bit surprising that the first image of Rihanna’s “Diamonds” tour was one of forgiveness. On her knees in prayer and flanked with religious iconography, Rihanna opened her concert on a somber note with “Mother Mary,” a song that finds the controversial pop star admonishing herself in the eyes of the Lord for falling back on old habits and ultimately admitting that she’s “prepared to die in the moment” in the name of true love.

It’s a heavy sentiment for pop music, although not a surprising one for a singer whose latest album campaign was built entirely around public defiance and sneering Bonnie and Clyde-style Instagram photos of her and on-again boyfriend Chris Brown. Ultimately, the song ended up being a tease, as Rihanna quickly shifted into the hard-edged shit-talking of songs like “Pour It Up” and “Phresh Off The Runway” that defined her latest release.

In the long run, it’s better for Rihanna’s sanity that she hasn’t felt the need to center an entire concert tour on defending her incredibly public and incredibly tumultuous relationship with Brown, but for a show that ended up lacking many of the same giddy highlights as her surprisingly good 2011 stop at the Target Center, some sort of narrative focus or cohesion would have been appreciated.

Besides not taking the stage on Sunday night at the Xcel Energy Center until 50 minutes after she was originally scheduled to appear, the pop diva’s entire set lacked urgency and Rihanna often appeared sluggish and non-committal to her vocals, relying on the audience to fill in the blanks way more than any self-respecting pop star should have to. When Rihanna wanted to, attitude alone helped carry songs (namely on “Phresh Off The Runway,” a feat that’s fairly impressive considering the album version barely resembles a functioning song), but those moments were too few and far between.

A mid-evening ballad session fared the worst, with Rih Rih doing little beyond looking gorgeous in a Jessica Rabbit dress to make songs like “Hate That I Love You” and “Take a Bow” stick as well as they did during her last visit to Minnesota. Matters certainly weren’t improved by the confounding decision to support each of the highlighted ballads with a single backing track that sort of sounded like that song Madonna did for With Honors back in the early 90s.

It wasn’t until the final segment–the one with all the lasers and club bangers like “We Found Love” and “Where Have You Been”–that Rihanna finally became energized. On “We Found Love,” she took off for a quick run into the audience to shake hands with her adoring fans in what may have been the only truly jovial moment of the night.

Much of the blahs of the night were forgiven during the encore, which saw Rihanna tackle her two most recent hits–the piano ballad “Stay” and the Sia-penned stunner “Diamonds” with considerable aplomb. Just as she did at last month’s Grammy Awards, Rihanna absolutely nailed “Stay,” offering what was far and away her best vocal of the night, full of control, nuance, and an obvious emotional connection to the material. Almost everyone surrounding me in the audience had their heads turned to the screen for the song’s entire running time, each careful not to miss a single look of pained anguish on the 25-year-old’s face.

Rihanna’s going to need more moments like that one if she expects to compete with the Beyoncés of the world. Until she becomes more confident on stage (the added attempts at dancing compared to the last go-round were appreciated but still not worth writing home about), she’s simply not at the point in her performing where she can forgo staging options like the giant pink tanks and floating pianos of the “Loud” tour to cover her shortcomings.

The hits are there, Rihanna. Now show your work.