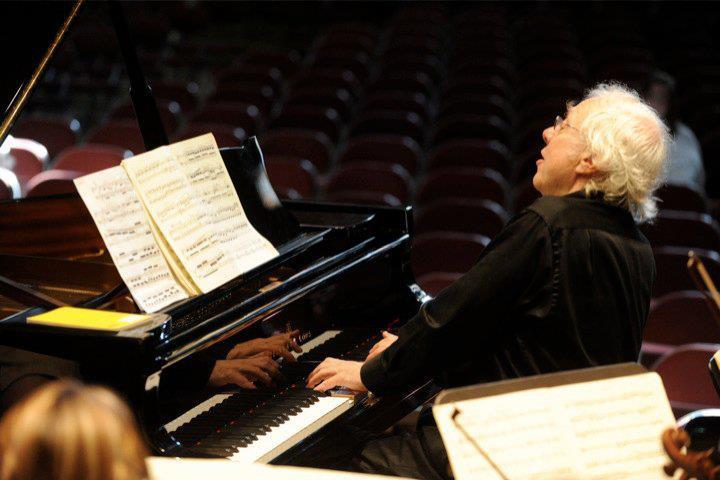 The measure of music and musicians is not just in the notes that are played, but also in the spaces between. A melody rendered with too much space becomes clunky and stilted; an Alberti bass line with too much, smeared and lost in a cloud. When just the right balance is found for a passage, piece, or repertoire, though, the notes begin to sing. How much space is appropriate depends on the instrument, the hall, the dynamics of a passage, and even the articulation of a phrase or a single note—but it is artistry that makes all the difference. This intricate attention to detail suffused Richard Goode’s piano recital at the Ordway on Tuesday, November 11.

This recital, part of The Schubert Club’s International Artist Series, began with a brief memorial of Stephen Paulus, whose long-time association with the organization began when he competed in their Scholarship Competition and continued through many forms, including several world premieres of his works at The Schubert Club’s concerts. (A more extended set of remarks by Artistic & Executive Director Barry Kempton’s is available online.)

The musical portion began with Mozart’s K540 Adagio in B Minor, which Goode approached with more attacque and separation than the piece is often played. This enhanced the clarity of the musical lines and produced a sound more representative of the fortepianos it was originally composed with, yet possessing enough tone to still feel the larger space of the concert hall.

Goode employed a different touch for the rippling passages of Beethoven’s Opus 78 Piano Sonata in F-Sharp Major. Articulation gave way to sensations and clouds of sound, with teasing fragments of melody peeking out in the Adagio Cantabile before consolidating at the movement’s end. After the abrupt end to this movement, he dove into Allegro ma non troppo with little pause or fanfare, letting the musical dialogue between right and left hands lead. A seamless transition into the Allegro vivace brought things to a rapid, almost unexpected conclusion.

The first half of the program ended with Brahms’s Op. 76 collection Eight Piano Pieces, an intermingled set of short capriccios and intermezzos. The most striking rendition was of the lilting Intermezzo in B-flat major, which was played to enhance the lively air that suffuses its passages, inspiring thoughts of happy holiday affairs.

The ordering of the second half of the program seemed backwards. Although Robert Schumann’s Opus 20 Humoreske is a fine piece and was well-played, the composition itself (some overly dramatic performances notwithstanding) ends rather abruptly, as if the composer closed the book without writing the true finale. Debussy’s Children’s Corner, on the other hand, ends with Golliwogg’s Cake Walk, which has a terrific finale. Starting with Humorekse and ending with Children’s Corner would have built more of a musical momentum in the latter portion of the evening, rather than allowing it to dissipate.

The performances of the Serenade of the Doll and Golliwog’s Cakewalk (from Children’s Corner) and the opening two movements of the Humoreske were especially pleasing to the ear. Halfway through the Schumann, however, much of the audience was visibly restless and shifting. Restless or not, they were quick to stand to applaud, and sat raptly through the final Arabesque offered for an encore.