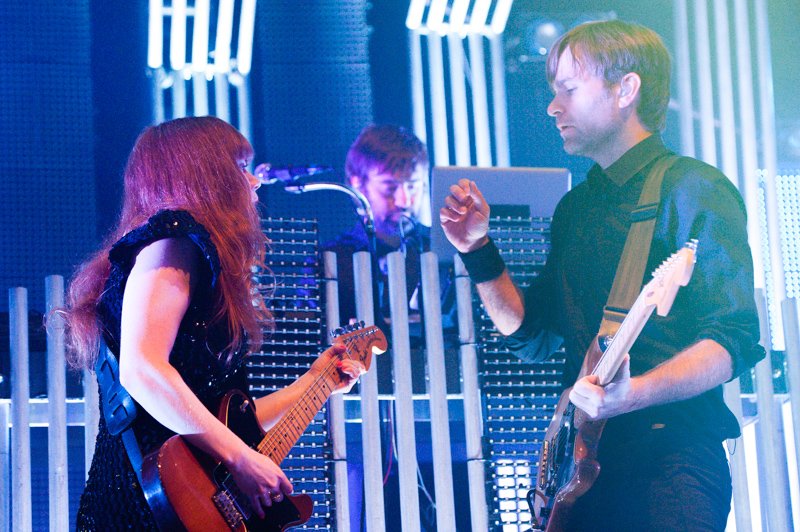 In the winter of 2003, Death Cab for Cutie and Dntel were two bands that had some name recognition, although, DCFC were on the brink of becoming the new focal point for the common emo kid looking for answers and a new direction in life with the upcoming release of “Transatlanticism.” When DCFC frontman, Ben Gibbard and Jimmy Tamborello began there “under-the-radar” side-project together, The Postal Service, I can’t imagine either of them would realize that there 1st and only album, Give Up would sky rocket on the independent rock radio stations and the indie album charts would also bring Seattle based icon label Sub Pop thousands and thousands of dollars. Eventually, Give Up reached the status of the 2nd biggest album to date for Sub Pop, with Nirvana’s first album, Bleach still holding the record for most albums sold on the label.

It was in the scorching summer of 2003, when The Postal Service previously made their only Twin Cities appearance and played to a sold-out show at the 7th St. Entry. I ended up going to the show with a friend who was a bigger fan than myself at the time of their lo-fi synth-pop music but that show definitely struck a chord with me and even ten years later, I still find myself listening to the album and as another friend once put it, “I’m going to bob my head so hard to their music.” And yes, I still bob my head while listening to their only produced album. This past spring, the fine folks at Sub Pop released a 10th anniversary edition of Give Up with a bonus disc of unreleased tracks including the fine cover of “Against All Odds” by Phil Collins from the Wicker Park film soundtrack, new recorded tracks and remixes of songs from the album.

This has all lead up to the return of The Postal Service to the Twin Cities to play a much bigger venue in Roy Wilkins in St. Paul that satisfied every fan that missed that one brief opportunity in July of 2003 to take in the glory of Gibbard, Tamborello and Jenny Lewis of Rilo Kiley playing your favorite songs from one of the most iconic alternative albums of the 2000’s.

While openers, the Lawrence, Kansas based pop duo, Mates of State, have played in the Twin Cities numerous times, they did a fair job of getting the crowd ready for the main attraction.  I was a little worried when Mates started their set, the auditorium was barely even half full for the early 7:30 p.m. set time, but by the 10 song set, people were filling in the upper bowl and the general admission standing mostly floor was close to capacity. Married couple, synthesizer/keyboard Kori Gardner and former MN native, drummer Jason Hammel, breezed through their 35 minute set playing mostly newer songs over spanning over their seven album discography, unfortunately played nothing from there first two albums, My Solo Project and Our Constant Concern but did end with a terrific cover of “True Love Will Find You in the End” by reclusive rocker, Daniel Johnston.

When The Postal Service entered the stage, the crowd erupted with cheers barely before anyone could see the four touring members hit the stage, but once they did, they went immediately into “The District Sleeps Alone Tonight,” the first song off Give Up with Gibbard, the most recognizable member of the band, appearing in all black clothing and looking much more svelte than in his earlier years with DCFC. Lewis, hoisting a guitar in a black sequins dress was very game with Gibbard rocking back and forth with the guitar during the song with growing anticipation before it got to its more “faster” sequence after its brief guitar solo with both Lewis and the second female vocalist, Laura Burhenn from the Omaha band, Mynabirds harmonizing to Gibbard’s vocals.

Without much of a pause, they jumped into “We Will Become Silhouettes” where the song took off and audiences crammed toward the front of the stage were now in the mood to start “bobbing” their heads and moving their feet around more wildly. It wasn’t until about midway through the song where Gibbard, took off his guitar strap and went to an empty drum set and starting playing the drums (which he did on multiple songs) and with Tamborello programming his laptop/computer monitors and the audience really made their presence known when Gibbard was on the drums.

On their fourth song, they played a newer song entitled “Turn Around” that was released in 2013 and featured on the 10thanniversary double disc of Give Up did provide plenty of energy to the audience that might have only been familiar with the ten song release of the original Give Up LP.

Following “Turn Around,” they jumped back into familiar territory of known songs playing “Nothing Better” and it looked to be that Gibbard and Lewis were in fact almost flirting on stage as they were dancing around with microphones attached to awkward red chords but was indeed one of the highlighted moments of their entire set.

About halfway through the set, Gibbard paused and said to the audience, “The last time we were here we played at the 7th St. Entry, and you wait 10 years to be successful after playing 7th St.”, which lead to huge applause from the crowd. One of the more unexpected moments of the show then came when they went into a cover of Olympia, Washington rockers Beat Happening’s mid-1980’s single, “Our Secret,” where Lewis rocked the drums. The next moment, Gibbard said, “This is a song about where I come from, “ and they went into “This Place is a Prison,” where the stage lights, which were springing different color sequences throughout the set, fit the mood with blood red colors through the song.

Leading to the inevitably pivotal moment of the setlist, Gibbard and Lewis lead the crowd in a clap-a-thon at the beginning of probably The Postal Service’s best known song of “Such Great Heights” and engaged everyone to clap or sing along as they played the romantic poetic song, in their catalog, which is listed as one of the best songs of the 2000’s according to Rolling Stone magazine.

Ending with “Natural Anthem” seem fitting considering it is the closing song on the Give Up album and has a feel with plenty of build-up of noise and synchronized music before there is an actual vocals in the song, it became a sort of blooming laser light show in the auditorium before Gibbard went into his sing-song vocals and leaving the stage shortly after he became singing.

Resting in between the finale for a couple minutes, the band returned to the stage where Gibbard, introduced the four members of the band, including Laura Burhenn of Mynabirds and thanked Mates of State for opening for them before going into a Dntel cover “ (This Is) The Dream of Evan and Chan” the first song that Tamborello and Gibbard collaborated on back in 2001, perhaps launching the notion of becoming The Postal Service.

Ending the sixteen song set with “Brand New Colony” was where the audience, at least from the floor general admission vantage point, where people were really swaying back and forth and again “bobbing” their heads to the beats and sounds of the Gibbard and Lewis, especially, really were contagious with their energy on stage and making sure that everyone was feeling as energetic as they were up on stage was a hit and a great closing song.

The 80-minute set, playing all ten songs from Give Up and a few extras was a pleasant surprise from a band that had been absent for the past ten years, really gave the audience everything they wanted to hear and more, with a few new songs and a couple of covers thrown in for good measure (although, it would have been tremendous to hear Collins’ “Against All Odds” cover) left everyone feeling a bit nostalgic and hoping there isn’t another 10-year hiatus before we receive our beloved “Postal Service” again.