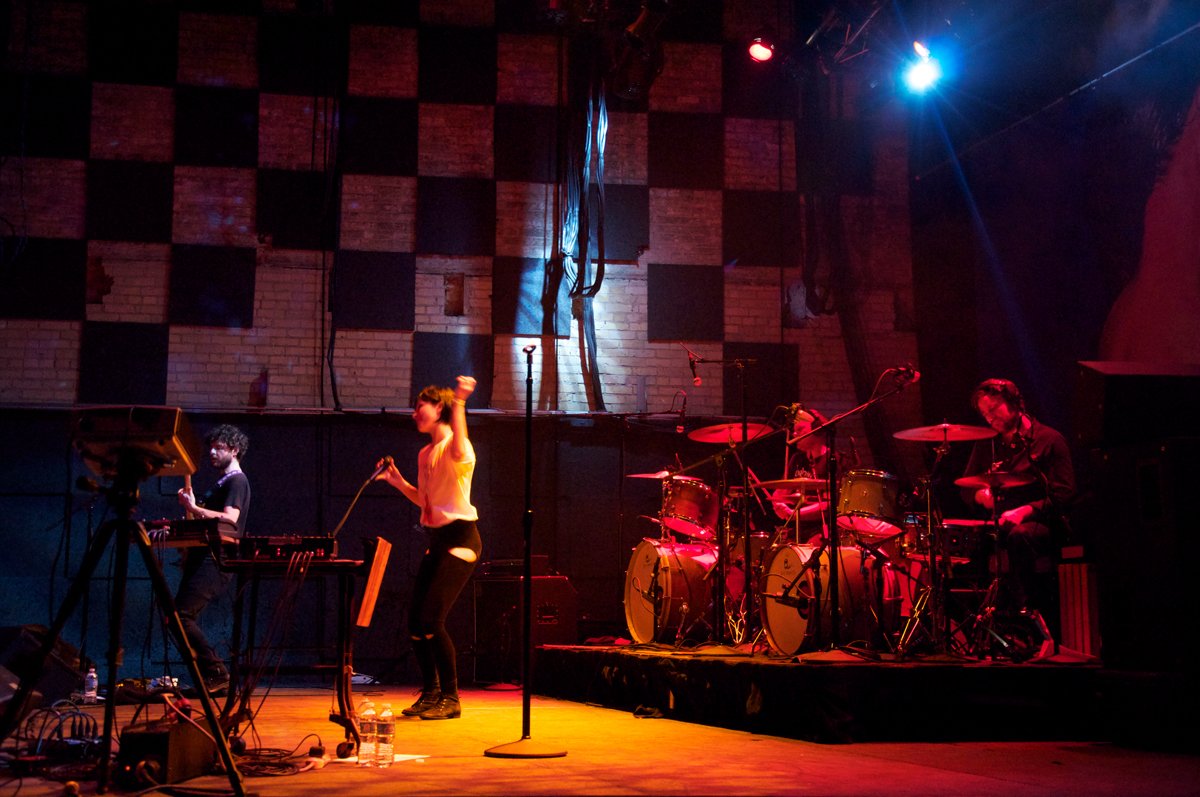 The two sold-out Poliça shows at Mill City Nights on November 29-30, with opener Marijuana Deathsquads, testify to the collaborative wonders of the Minneapolis music scene as well as the fervent reception of Poliça’s sophomore album Shulamith, which dropped just last month.

Despite the thorny details surrounding the album’s inspiration, frontwoman Channy Leaneagh had no problem delivering two incendiary performances that evoked not despair or destitution but rather independence, self-love and flat-out empowerment.

Surprisingly, much of Poliça’s new album comes in a lighter, dancier package than Give You the Ghost (something you may have noticed when they released their almost-indie-pop single, “Chain My Name”), but these differences translated well to Leaneagh’s performances over the weekend. Sporting a black wig—think Uma Thurman from Pulp Fiction—and torn up, black tights that revealed her bare hips, Leaneagh danced sprightly, even flirtatiously about the stage as the band opened their second night with their darkly dance-synth number, “Spilling Lines.” Its metallic overtones cooed repetitively as light cast a giant dancing shadow of Leaneagh on the checkered wall beside her.

The band went through some old favorites such as “Lay Your Cards Out,” “Dark Star,” and “Amongster.” However, the most powerful aspects of the shows weren’t the energetic, rhythm-heavy pieces we’ve come to expect from Poliça, but the empowering moments during the album’s slower songs that Leaneagh chose to showcase her vocals as a true lead singer.

Songs like “Tiff” (which features Justin Vernon on the album), and “Warrior Lord” came off especially strong, where Leaneagh’s voice broke free from the heavy digital layering that sometimes pushes her voice into the background. It was during these songs that she reminded us that her voice isn’t just interestingly manipulated atmosphere, but powerful and singular—an independent voice coming just from her (appropriately symbolic, considering the album title’s origin). And it’s during “Warrior Lord” that Leaneagh ripped off her wig, casting it to the ground and revealing her natural hair underneath (clearly another symbolic gesture of empowerment).

The show had its rough patches as well, in the form of two tired drummers. With Drew Christopherson and Ben Ivascy playing drums in both Poliça and Marijuana Deathsquads, the two showed some wear by the second show. Both Christopherson and Ivascy had some slip-ups keeping beat during Marijuana Deathsquads’ set, and Ivascy even dropped a stick during Poliça’s “Lay Your Cards Out” right at the song’s concussive, drum-centric ending.

Yet all in all, the show was a crowd-pleaser and the audience showed their gratitude for that.

“We love you!” interrupted an audience member during Leaneagh’s sentimental speech during the second night’s encore.

“Aw, thank you,” Leaneagh replied sincerely. “It’s nice that people come and see us,” she continued before being interrupted again.

At this, a somewhat flustered and blushing Leaneagh started the encore: a cover of “You Don’t Own Me” by Lesley Gore. No symbolism there.