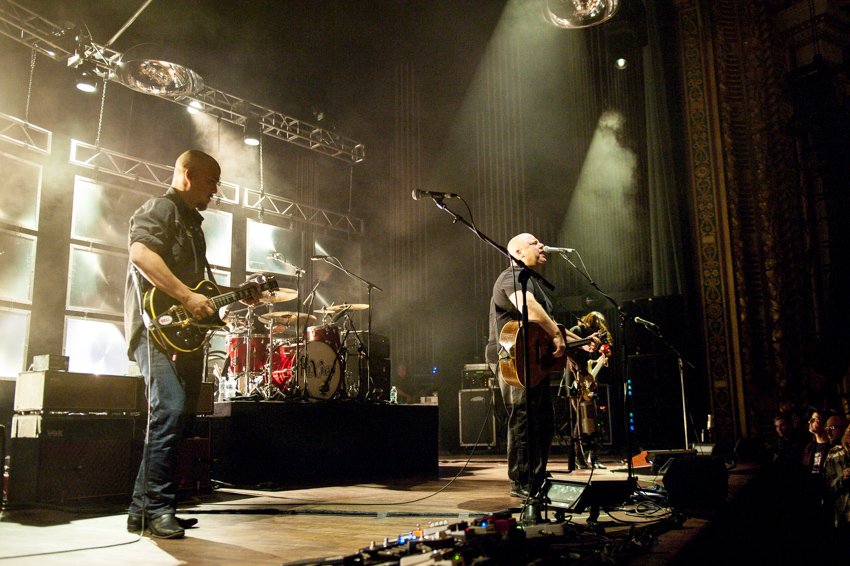 If you listen closely enough, you can still hear Pixies fans referring to performances by the Boston four-piece as, “reunion shows,” or describing the band as, “reunited.” And, technically, these fans are correct. After a string of weird and wildly dynamic, near-perfect albums in the late-80s and early-90s, Pixies famously broke up via fax in 1993 before being able to truly benefit commercially from the alt-rock revolution their music had helped inspire.

Because of that muted and unceremonious end in the 90s, fan and critical reaction to Pixies’ surprise reunion in the spring of 2004 bordered on the euphoric. Finally, the kids who were raised on a diet of Pixies-inspired alt-rock were grown up and had a legacy act of their own to worship after the fact. The power and excitement of those early reunion shows, (the first of which was in Minneapolis), saw Pixies reemerge as the vanguard of urbane, punkish art-rock and the good-will generated among their fans by seeing their idols back on stage has yet to dissipate.

But, with a decade having passed since their first reunion concert, the frankly, (if not fairly), mixed reception of their first new album in 23 years and a cycle of two, not-original-issue bass players, the question is being begged: Is Pixies still a great band or is it just remembered that way? With a robust set of muscular guitar rock, Pixies met that question head on this week during their hour and forty-five minute set at The State Theatre in Minneapolis on Saturday, October 12.

Walking out on stage in front of an adoring crowd, front man Black Francis and guitarist Joey Santiago filled the room with a sequence of dissonant guitar strums and feedback squalls before being joined by drummer David Lovering and touring bassist Paz Lenchantin for show-opener “Ed is Dead,” an early Pixies song that in many ways set the template for much of their discography. An important part of that template is the sound of Francis’s off-kilter, manic singing and brittle acoustic cadence combined with the grimy high-end of Santiago’s guitar leads. That mixture has always been one of Pixies greatest strengths, and this interplay was intensely present during the opening numbers of the band’s set. From “Ed is Dead” to classics like “Nimrod Son” through deeper album cuts such as “Brick is Red” and “Cactus,” Pixies were vivid and forceful, reminding the audience not just of the quality of their songs but also the band’s workman-like dedication to their execution.

What makes so much of Pixies past music so compelling is its synthesis of the divine and the profane, the pop and the punk, the sound and the fury. Hearing Santiago fill the State Theatre with blistering guitar tone while Francis, Lovering and Lenchantin hold down the rhythm and carry the audience through a well-sequenced greatest-hits set list is certainly a pleasure, but that’s to be expected when a band has a back catalogue of Pixies’ caliber.

Which of course raises the specter of the new stuff. Just as Springsteen has his “We Take Care of Our Own” and Metallica have their “St. Anger,” so to has Pixies become a veteran touring band with new material that hopes to freshen up a familiar live show only to be condemned to a hazing judgment when compared to the band’s past successes. For the most part, the new songs, (all of which are from this year’s Indie Cindy, the first new Pixies album since 1991’s Trompe le Monde), were politely, if not enthusiastically, welcomed by the audience. However, when heard within a live context, surrounded on either side by better Pixies songs, these new tracks sound nowhere near as stiff and generic as they do on record. “Indie Cindy” seemed to be just as eerily confrontational, though not as vital, as classics like “Bone Machine” or “Mr. Grieves”, where as “What Goes Boom” and “Blue Eyed Hexe” seemed perfectly suited for the late-set pummeling Pixies dished out just before breaking for an encore. It’s as if the energy of a live performance, (and the benefit of full volume), gave some of the new songs a vibrancy and dynamism missing for their studio versions, (and to be fair, only a small portion of the evening’s set list featured new songs and it avoided all of Indie Cindy’s tedious low-lights).

That is not to say Pixies weren’t missing something live. That something, of course, is original bassist Kim Deal. Having split from the band during the recording of Indie Cindy, Deal was often though of as Pixies’ secret weapon, her feminine, wide-smiled normalcy on stage serving to contrast and temper Francis’ tightly wound masculine repression. Deal’s vocals and harmonies are a huge part of Pixies’ sound, and she also wrote some of their most recognizable songs, all of which were noticeably absent from the band’s set. Without either of these tools availible, the Pixies on stage at the State did feel like a different beast than Pixies past, though not an entirely diminished one.

Lenchantin’s turn in the Deal position was an excellent one, and her presence seemed to be a point of entrance for the audience. Applause and hollers would erupt from the crowd whenever Lenchantin would drop into a solo bass line or step towards the mic and begin to sing one of Deal’s famously husky backing parts. It’s an interesting trick, with Lenchantin not trying to truly replace Kim Deal, but rather channel her, while at the same time clearly enjoying the simple act of being there and sharing the audience’s admiration and affection for Pixies and their material. In many ways, she served as a conduit for the fan’s bond to the Pixies past, transforming certain moments, (the harmony on “Where is My Mind” or the opening bass line of “Debaser”), into celebrations shared with the crowd, not simply songs played for them.

However, with all the new material and stage dynamics at play, what stood out most during Pixies set tonight was just how powerful and punishing their catalogue of songs truly is, and how, after nearly 30 years since many of those songs were first recorded, they still sound as fresh and disturbing as they did upon first release. While their performance started with an engaging mixture of mid-tempo pop- and punk- flavored strummers peppered with interesting guitar textures, halfway through their set, Pixies put down the acoustics, plugged in and never looked back. Rampaging through some of their darkest and most visceral songs, (“Isla de Encanta,” “Crackity Jones,” “Bone Machine,” “Something Against You,” “The Sad Punk”), Pixies delivered a commanding performance through the late set, full of distortion, howls and all the vivid dissonance through which they made their name decades ago. Their music has become so ubiquitous in the narrative of rock history that it is at times easy to forget how splendidly brutal it is, and this set-long buildup to these final few rockers bought that brutality into sharp relief.

It seems to be a hard truth that all great rock bands will break up, only to reunite when they decide that their fans have fasted long enough. From The Replacements to Death From Above 1979 to Led Zepplin, if you wait long enough, even the most broken-up bands will reform if the price is right. For Pixies, though, if you wait even longer, they will to start acting like a band again and that is always a scary proposition for die-hard fans. Will age temper their talents? Will new music taint their memories of the old stuff? Will the thrill of finally having a chance to see your favorite band again give way to the routine of having them pass through your town every few years? Whether it is the quality of their best material, a testament to their skill as performers, their fearless insistence for touring new material or some combination there of, at The State Theatre, Pixies proved that they are still a great band. It’s just that you might have to back away from your MP3 collection and see them on stage to understand why.