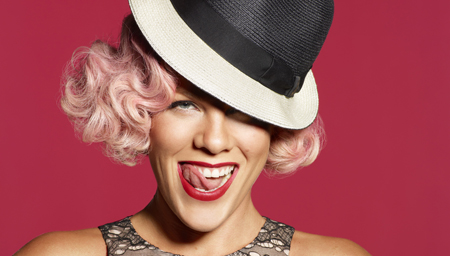 What better way to escape the disappointing cold and snowy white start to spring in the Twin Cities than a big production music event at the Xcel Energy Center, where it was all Pink and very hot. One of Pop/Rock’s most dynamic entertainers, Pink (she spells it P!nk) presented The Truth About Love Tour in support of her sixth studio album with the same title, to a sold out crowd in St. Paul on March 19. The world tour began February 13 in Phoenix and has been selling so well that extra dates are now being added to the back half of the schedule including a November show in Minneapolis.

Tour sponsor CoverGirl had several different promotions taking place as you entered the venue. Representatives were walking around like old fashioned cigarette vendors offering free samples of mascara. An area was setup for free manicures and another station offered a makeover with an opportunity to be videotaped sharing your thoughts regarding the “Truth About Love.” There were also displays of Pink’s CoverGirl promotional posters setup for photo opportunities.

As fans filled the seats, a glance in any direction would reveal something colored pink including skirts, shirts, bags, coats, shoes and of course hair. A curtain covered most of the stage, but lucky fans crowded around a runway that extended out from stage right and curved around to a smaller heart shaped platform in the center. Tunes like “Play that Funky Music” and “Disco Inferno” were getting people in a dancing mood while a carnival like sidekick named Rubix weaseled his way around the audience and drew some laughs from his antics projected on the large video screens.

He ended up playing a bigger role than expected as the actual performance started out with Rubix acting as the host of a mock game show. When looking for an audience member to come up on stage, a camera panned the crowed and stopped in a spot where to everyone’s surprise, Pink was sitting amongst the crowd. The audience cheered with excitement as they tried to figure out where she might be while the curtain was raised to reveal one of the best looking interactive stage designs to date. The centerpiece was a giant heart shaped video screen with a “Truth About Love” banner lit up above. Four additional large video screens combined with four other video panels that served as a backdrop to the band. All the screens were creatively used together to help tell the story of each song with a combination of video and visually stunning light themes.

Pink’s first of what would be many outfits for the evening was a stylish pair of silver studded high heel shoes, matching pants a half shirt that nicely showed off her chiseled mid-section. She is no doubt in optimal shape to be able to perform at this level night after night. The first notes of “Raise Your Glass” played as three muscle bound male dancers hung from a metal frame that began to raise up while Pink descended on a bungee like swing performing acrobatics while singing “Right, right, turn off the lights we gonna lose our minds tonight …”  The talented band sounded super tight and in addition to a standout drummer and lead guitarist, had women filling the roles of bass, keys and backing vocals.  The room sounded great from the first note and the performance started out with plenty of visual “wow” factor including aerial feats you would expect to see from Cirque Du Soleil.

While the audience was clearly entertained by the show’s upbeat theatrical start, “Just Like a Pill” had that more traditional concert feel and had fans grooving and singing along. The crowd continued rocking to the upbeat “U + Ur Hand” which featured all three men and four women dancers joining Pink for a choreographed routine. Pink appeared to have boundless energy and made her way up ramps on each side of the stage to interact with the audience and reach out and touch hands. It felt a bit like songs were grouped together to try and even out some of the more complex and physically demanding routines with others that would allow for some recovery which at times changed up the pace of the show more like a play with separate acts.

The clear standout song early on was the current albums second top 10 single “Try.” With a dramatic intro including a giant burst of fire, the crowd really perked up. It also marked Pink’s first outfit change and was her return to the air for more twirling acrobatics from the bungee swing as it moved along a track covering all parts of the stage. Her vocal sounded surprisingly great as she joined a male dancer back on stage for some mind blowing strength balancing poses that wowed the audience. The artistic dance continued into the next song and expanded as the other 2 male partners joined in for a sexy performance of Chris Isaak’s “Wicked Game”

The next real shining moment came during “Just Give Me a Reason,” the current single which features Nate Ruess from the band Fun.  Although Ruess was not present, Pink was able to perform with him at the heart-shaped screen with the help of clever video synching. Their voices sounded amazing together on the chorus harmonies. Pink started singing “Sober” from an egg shaped structure that was raised into the air and slowly rotated as it lowered back down to allow another dancer to get on and join her. As the songs intensity grew, the structure took on more dancers and began spinning faster. This process continued to where the shape was spinning quite fast by the end of the song with dancers were leaning out the sides and hanging from the structure and received a strong audience reaction.

Pink changed into a black tube top and long white skirt for a scaled down acoustic performance, which provided a nice contrast to the evening. Accompanied only by piano, you could really appreciate her vocal ability during “Family Values.” Pictures of her family were shown on the heart shaped screen and seem to add a personal touch that pleased fans. Pink grabbed a stool and had a little fun with the audience putting on a silver tie and a glove that was thrown up onto the stage. Accompanied by acoustic guitar, she performed “Who Knew” and really got into “Fuckin’ Perfect” as the crowd sang along enthusiastically.

Pink changed into a more street inspired outfit to pay tribute to her R&B inspired first album with a medley of tunes (Most Girls, There You Go, You Make Me Sick) that of course included a fun choreographed dance routine. This paved the way nicely for “Slut Like You” and the strongest song of the evening “Blow Me (One Last Kiss).” The entire crowd was on its feet and people had even moved out into the aisles to dance. Feeding off the crowd’s energy, the dancers seemed to be having the most fun of the evening dancing freestyle all about the entire stage before piling on to a sofa that was rolled off stage like you might see at the end musical.

I don’t think anyone expected there was any more room to turn things up a notch for the encore, but they sure did manage to achieve that. The taunting nature of “So What” set the perfect tone for Pink to strap in for the most thrilling aerial stunt of the night. Jaws hit the ground as Pink was sling shotted over the crowd to the back of the arena as high as the upper balconies literally allowing the entire crowd their one chance for an up close performance. She was tossed around up and down and from side to side over all parts of the arena for the entire song, which in the end produced that deafening crowd roar that will give you chills. The audience was brought back into the atmosphere with a simply elegant performance of “Glitter in the Air” to conclude an epic performance.

City and Colour was the supporting act for the evening. The talented band from Canada is built around singer/guitarist Dallas Green’s songwriting and signature vocal tone.