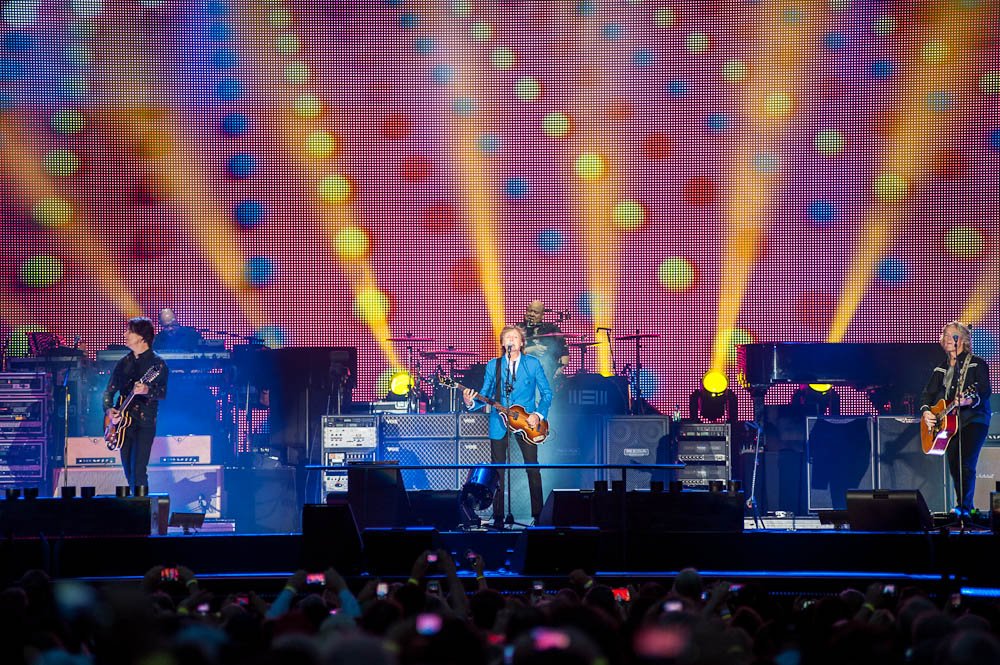 “Oh my God, this is actually happening.”

This was the first sentence I overheard upon my arrival to Target Field on a chill, damp evening that brought the Paul McCartney experience into perspective for me. As I watched the young woman embrace her partner, her body shaking, her eyes close to tears, the idea that Paul McCartney’s arrival in Minneapolis was something larger than a simple show was driven home. Here is an individual whose body of work spans half a century, who was one quarter of arguably the most popular and influential musical act of all time, and whose fame and appeal crosses generational boundaries. Paul McCartney is one of the last true musical icons alive, an individual for whom the term “legend” is accurately applied. His stature is evidenced by the emotions felt by certain individuals, this young woman in particular, for whom the simple act of holding a ticket draws forth such powerful emotions that she felt the need to make a very loud public exclamation and to draw a loved one near.

Paul McCartney’s performance at Target Field was far beyond a simple show, instead becoming an historic, almost spiritual experience for those in attendance. Being in the thick of it, standing side by side with people of various ages, singing along with thousands of people to iconic and beloved songs, and singing those songs with the man responsible for them, was beautiful and stunning. Seeing a father steady his son as he stood on his chair to watch McCartney perform, seeing an older couple dance and move and shout with a surprising amount of vigor, seeing the masses of individuals who swayed to songs like “Let It Be” with their cell phone flashlights on, seeing these things was a reminder of the power and status of McCartney and the universal appeal of the songs that he has written and performed.

Was the show without its problems? Not at all. The sheer amount of human traffic was overwhelming in both entrance and exit, a chaotic scene involving long lines and slow movement that caused more than a handful of people to express frustration with the process. But the show itself was fantastic, as McCartney maneuvered through his catalog for nearly three straight hours with hardly a break, alternating between material both old and new from his Beatles work, to Wings, and his most recent album “New.” McCartney’s pace of a thing of perfection, giving rest between energetic hits such as “Back in the USSR” and “Band on the Run” with slower tracks like “Yesterday” and “Eleanor Rigby” and providing both himself and the audience a very necessary emotional break in the midst of an overwhelmingly powerful performance.

While McCartney was clearly well-rehearsed in not just his set list but his audience banter, his routine never came across as forced or robotic. Rather, his built-in quips and motions were part of his appeal, as seeing a man with half a century of performing under his belt still giving the sort of love and energy that he had to give on stage was incredibly impressive. McCartney was clearly in his element as he alternated between the typical “(X City) you’re a wonderful crowd!” routine and stories of his past with The Beatles and other musical acts, delivering very interesting stories the likes of which could only be attributed to a man of his age and experience in a very youthful and energetic manner more suited to an individual half of his age. In these moments you could see the young man who changed the world as part of The Beatles in the 72 year old man who stood on the stage, as his youthful charisma escaped his aging frame and held the audience in an indescribable way that only a truly masterful performer could.

On a cool, damp summer night in Minneapolis, Paul McCartney came to town for what might be the final time. One of the last icons of an era long past performed with a gusto that was almost unreasonable for his age and brought to Target Field, a place more known for athletics than artistry, a performance which will not soon be forgotten by any of those who had the fortune to attend. McCartney’s performance was not a tribute to a bygone era but a reminder of the timelessness of music and the endurance of beauty and joy. It was a gathering at a generational crossroads where old and young came together to declare that yes, this was good, this was worth celebrating and cherishing and remembering. It was an affirmation of McCartney’s legacy as an artist.

And it was a hell of a good time.