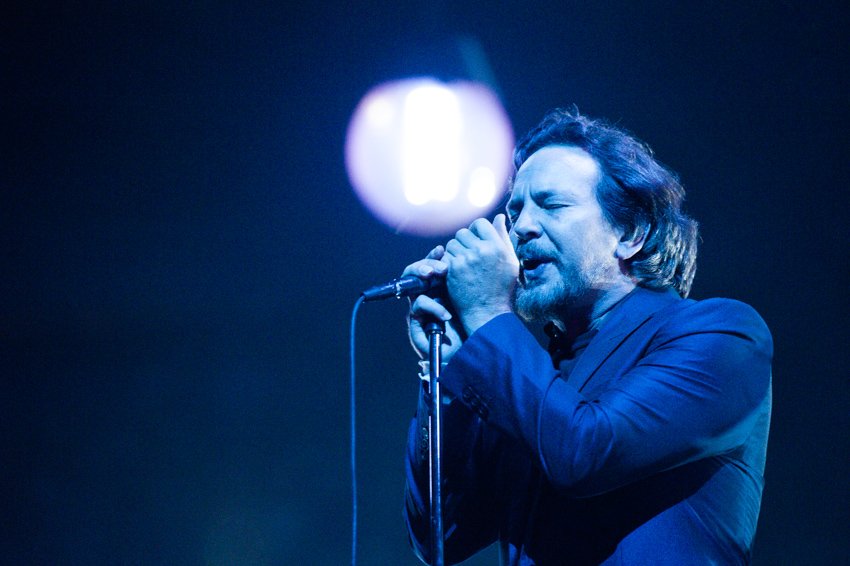 White stage lights streamed horizontally over a sea of heads, silhouettes stealthily moved and found their places, 18,000 voices exploded in greeting, and Eddie Vedder seemingly floated to the front and raised a bottle of wine to return that greeting. Without a word, the “Pendulum” started to swing with the tapping of a hi-hat and a soft haunting resonating from piano keys. Vedder’s voice, deep and melancholy, slowly pushed forth the words “Can’t know what’s high, ‘Til you’ve been down so low” and space was taken up by the entrancing tone produced by his vocal chords.

Eight years has passed since fans have experienced the presence of the giant that is Pearl Jam, and it was certainly worth the wait (11 years if you discount them opening for Tom Petty & the Heartbreakers). With a meaty 32-song set lasting just over three hours at the Xcel Energy Center, the band opened its vast catalog and played from over two decades’ worth of material.

Following “Pendulum,” they kept the mood somber for two more songs with “Release” and “Nothingman.” Then, the room exploded. “Go,” with its fierce tempo, came charging out of the gate like a young racehorse, followed by an equally aggressive “Life Wasted.” Fist-pumping fans sang along and the energy from 18,000 people matched that of the energy produced by the six musicians on stage.

With minimal lighting and production, Pearl Jam proved they didn’t need anything other than their talent. They not only played the songs they are so well known for like “Even Flow,” “Last Kiss,” and “Daughter,” they covered nearly every era of their illustrious career. Early B-side songs “Footsteps” and “I Got Id” were received well, and fans sang along with material from their new album Lightning Bolt.  The title track “Lightning Bolt” proved itself a rocker destined to be a new classic from the band, while the anthem “Sirens” brought a smile to many fans faces.

Guitarist Mike McCready was in top form with his soloing, turning a few songs into longer jams including the deep cut “Love Boat Captain” that kept fans going mid-concert. After a few more songs, Vedder paused the momentum to give some words of acknowledgement. “One of the reasons we’re here in town is the University of Minnesota Children’s Hospital,” he said.

He brought out Dr. Jakub Tolar, a blood and marrow transplant physician, who Vedder spent part of Saturday with touring the hospital as a charity effort. “He let us tour his facility, so I’m gonna give him a tour of our facility,” Vedder said and then led Tolar around the stage and introduced him to the band members.

Tolar was allowed a few words at the microphone. “I’m a bone marrow transplant doctor. His (Vedder’s) music and my job have a lot in common. We give people hope.”

Vedder wanted to make it clear he supports what Dr. Tolar does, telling fans to go to http://ebresearch.org to learn more.

Along with his support for bone marrow transplants, Vedder gave a nod to fans multiple times and became more playful as the concert progressed (doubtful the two bottles of wine he drank had anything to do with it).

After a stellar “Rearviewmirror” to close out the main set, Pearl Jam returned to the stage and Vedder greeted by saying, “We’ve got a few more songs left if you’re interested. What day of the week is it? Do you have to work tomorrow?”

“(Drummer) Matt Cameron is responsible for my hearing loss. Surfing and staring into the sun is responsible for losing my vision. You’ve got a lot of colorful and pretty sings out there, but I can’t read any of them,” Vedder joked, offered to sign some of them, and then started the encore with “Elderly Woman Behind the Counter in a Small Town.”

After “Thin Air Footsteps,” he tested the audiences’ singing ability by performing “Imagine,” and then gave the fans behind him some attention by playing “Last Kiss” at the back of the stage.

Before ending the encore with “Porch,” Vedder read a sign a female fan had given him that stated “Third Generation Pearl Jam fan due in March,” and Vedder opened what appeared to be an envelope and said, “Tell dad…it’s a…boy,” with a big smile on his face. The concert camera crew was on the couple who immediately embraced, appearing on the large screens flanking the stage. What a way to find out the sex of your child.

For most bands, the night would have ended with “Porch,” but Pearl Jam returned for a second encore and delivered an extended, elegant version of “Black” to start. Next came a teasing intro to “Alive” which fans immediately screamed for but Vedder stopped the song, picked up a Minnesota Wild jersey (number 14 with Vedder on the back), pulled it over his head, and said, “You see, I was going ‘Into the Wild,’” and played “Setting Forth.”

Along with Vedder’s nod to Minnesota sports, McCready performed the show in an Eclipse Records t-shirt in celebration of the St. Paul record store. Next, fans belted out “Better Man” with Vedder, then got the full version of “Alive,” a song that will probably never get old among Pearl Jam fans.

At this point, all the house lights were up and the intimacy of a dark venue was totally gone. Instead, the crowd had become one by fist-pumping and head banging together and Vedder fed off the energy and fun with a transcending version of “Rockin’ in the Free World.”

Pearl Jam has made it through over 20 years of writing, recording, and performing music. Something of a phenomenon, they continue to produce a sound that was born from the grunge era and have made it unique, speaking to the souls of millions of dedicated fans. Needless to say, Vedder’s vocals are powerful, dynamic, hypnotic, and full of distinction.

But Pearl Jam knows they’d be nothing without an audience. Passionately ravenous, the crowd got what they wanted and the band knew how to deliver it. Vedder thanked them by saying, “What’s really kept this all together is the energy you bring, and it really means a lot to us.”