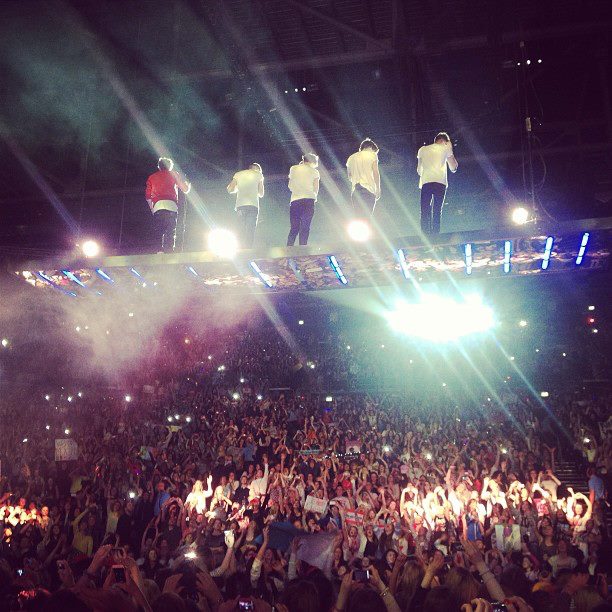 One Direction, the white-hot boy band from across the Atlantic, played a Target Center bursting at the seams Thursday, July 18. The boys’ tops, both mop and tank, bounced around the stage as if they were the life of the pool party you threw while your parents spent a kid-free weekend at the vineyards. Out in the audience, cell phones waved, girls clutched their faces, moms snapped pictures of their daughters singing along.

I’d never attended this kind concert before. And as a late-20s man there by myself in a someone-clearly-made-a-mistake near-stage seat, I stuck out. That’s what the woman next to me said.

I wasn’t even supposed to be there. I’d been listening to an old Dillinger Four concert from a now-defunct punk club in Green Bay, Wisconsin, doing my morning news reading routine, when my editor posted we’d secured a ticket. I’d heard about these spectacles in the late 90s, NSync or the Backstreet Boys. A quick Google of the StarTribune article “One Direction show Thursday at Target Center is one hot ticket,” was complete with these lines:

Resale prices start around $270 for nosebleed seats, and the usual danger of phony tickets is reaching a fever pitch.

“It’s turning into a nightmare for a lot of parents,” said Molly Schultz of River Falls, Wis., who was duped into buying a pair of fake $150 tickets via Craigslist.

How could I, punk-bred writer, miss it?

I biked down 1st Avenue to Target Center, wove through knotted traffic, around an SUV parked in the protected bike lane, between clumps of teen girls lined down the block, carrying posterboard decorated with puffy paint and Christmas lights, snapping their gum from their braces. Spectacle indeed.

“So, are you a writer?” the thin, dark-haired woman in the seat beside me asked.

I pulled out the earplug on her side. “Yeah, I’m reviewing the show.”

“I figured. You kind of stand out. You know, a guy your age. Here by himself.”

The houselights were on and Aussie pop-punk opener 5 Seconds of Summer had just finished goading the crowd with sugary lyrics and hooks, and the often repeated question, “Are you ready to see One Direction?”

After our introductions, the woman left to concessions and a younger, sandy redhead with her, slid over.

“Yeah. Someone else was going to cover this show, but fell through. I figured I couldn’t pass it up.”

“I was dragged here, too. I nanny her,” she said, thumbing to the small, maybe 10-year-old child beside her.

That’s one of the mysteries and I’m sure difficulties when marketing or picking songs for bands like One Direction. Their fan base spans from children hooked on the syrupy pop to the teens who dream of the boys as relationship material.

In that break before One Direction, screens flanking the stage played music videos and commercials. One commercial featured the One Direction boys pitching their own Ken-like dolls. The closing line, delivered by Harry—a fan favorite—was, “If you’ve ever wanted to take us home, now you can!”

That was the most boastful line of the night.

One Direction emerged from behind tall, narrow screens, lit with British architecture for their appropriate opener, “Up All Night.” Ear-splitting cheers. Cell phones. Flashes.

For those more familiar with their progenitors—Nsync, Backstreet Boys, NKOTB—One Direction takes a different approach. They’re backed by a band—drum kit, bass, guitar, keys—and boys don’t dance. That lack of obvious choreography, along with the appearance of live musicians behind them, creates a spontaneous, if aloof, aesthetic. With visuals constantly shifting on those backing screens between cityscape motifs—skylines, shots along the Thames, concert bills pasted on brick walls—the boys seem less a production, than lads having a goof while waiting for the Tube.

The boys, seemingly grateful and overwhelmed by the crowd’s enthusiasm, spent long breaks between songs telling the crowd, “Minneapolis! It is literally so loud in here!” “This show is so amazing!” “Thank you so much, Minneapolis! We wouldn’t even be in America without you!”

That’s really their thing. With songs often in the low-three minutes and rarely going over four—One Direction’s 21 song set is barely 1:15. To make their show nearly twice as long, much of their time on stage was chatting with the crowd. That’s also how their seemingly directionless stage performance worked. During upbeat songs, the boys spread out and rotated like a wheel or Twitter feed, trading sections of the crowd they devoted individual attention. At most points the focus was less on the group and more on the individual pointing or singing to a section, with a common finish for their songs being the five boys clustered at center stage, drawing all eyes together like a thousand points of light. As vocalists, together was where they were strongest.

Thank backing tracks and the smoothing effect group harmonies have on uneven individual efforts. These boys are fine singers, but individual verses from a couple of them consistently sounded pitchy and hesitant. Individually, they each didn’t make the cut in the UK’s X-Factor, but were reformed on the show as a group. Mates by happy accident.

So there are unsanded burrs—like Niall Horan’s muddled and definitely live powerchording on a handful of second-half songs. But that, like the seeming impromptuness of their staging, is part of their aesthetic. It’s also important to note that despite appearances, One Direction’s backing tracks differ little from the synth and drum machine beats of NSync, Backstreet Boys, or NKOTB.

So did I enjoy myself? Often, yes. Despite the frazzled parents I saw outside the Target Center when I biked up, everyone around me was insanely happy, though I saw some yawns and sleepy eyes from the neighbor nanny’s young charge. Moms snapped photos of their daughters and friends. It was the event of the summer for many, I’m sure.

Heck, the One Direction boys were charming goofballs. Their on-stage banter was funny and I often found myself watching those not singing as they hammed it up for the crowd. And about midway through the show, when they pulled a girl from the audience to pronounce Minnesota for them, I even felt giddy.

Even though it wasn’t my scene, and though we can debate “made,” as NPR commentator Ann Power noted, “The best thing about these shows isn’t the scream therapy provided by thousands of overamped natural sopranos, or the chance for an embarrassing mom like myself to relive my own Tiger Beat days. It’s the joy of witnessing first-time concertgoers learning how to love music being made right in front of them.”

So was it worth it? For me, yes. A free ticket and the spectacle I hoped for. But for everyone, I’m not sure. As Jezebel pointed out a week ago in the article “One Direction Concerts Are Only for the Tween 1%,” the show at the Target Center was a serious chunk of change for many parents. Some noted to the Star Tribune when tickets sold out a year ago, they’d thought One Direction might have been a passing thing—gone in a year’s time, as out of nowhere, white-hot groups tend to be.

Though that’s not always the case. I still listen to and buy the records of my teen idol, Billy Corgan, noted narcissist. I mean, who knows. This is a different generation. Probably never more evident than during opener, when 5 Seconds of Summer yelled, “Bob the Builder!” and the arena erupted, “Yes we can!”

Up All Night”
“I Would”
“Heart Attack”
“More Than This”
“Love You First”
“One Thing”
“C’mon, C’mon”
“Change My Mind”
“One Way or Another (Teenage Kicks)” (Blondie cover)
“Last First Kiss”
“Moments”
“Back for You”
“Summer Love”
“Over Again”
“Little Things”
“Teenage Dirtbag” (Wheatus cover)
“Rock Me”
“She’s Not Afraid”
“Kiss You”
“Live While We’re Young”
“What Makes You Beautiful”