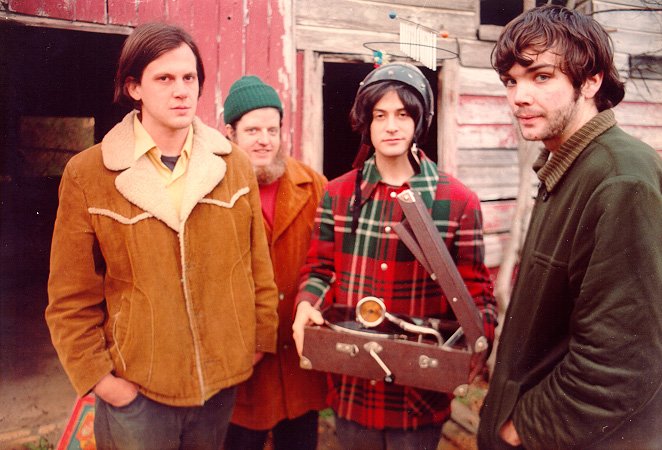 I have been looking forward to Neutral Milk Hotel since I bought the ticket in August. Luckily I was uncharacteristically on the ball and got tickets the first morning they were on sale; when I checked later that the day the show was sold out – both nights! As I’ve explained ot many friends, Neutral Milk Hotel is the most popular band, you’ve never heard of. They don’t tour often and I had never seen them.

They were absolutely worth the wait.

They opened with King of Carrot Flowers Pt 1, followed by Kimg of Carrot Flower Pts 2 & 3. Lead singer, Jeff Mangum, started on his own and the other band members joined. It was very exciting. Pats 2 & 3 build to a crescendo as a song, starting with an dull keen and moving to full band and great danceable music. To be fair there were only a handful of us actually dancing but that’s because everyone else was wrong. That music is meant for dancing!

The music is modern hippie with instruments including a saw, horns, accordian and zanzithophone. The band members hail from southern United States, but they look like folks you might meet in a pub in the West of Ireland in the offseason. Lots of woolly sweaters, long skirts, corduroys, hats, beards and one dapper suit. Lead singer drinking tea. The sound is somehow European hippie to me too – but maybe that’s because I’ve spent more time in Dromahair (Ireland) than Athens, Georgia. It is a unique sound; the saw brings in an eeriness and the horns bring in a mellow drone, especially when two horns are played together. Add in the zanzithophone and the band sounds like a second line parade. Shuffle it again and the sound becomes more like a dirge. Yet throughout the sound is danceable – in part I think because there are often several melodies going on at once in any given song. The melodies weave throughout each other but are definitely separate.

The band has a mystique about them as well – partially because they don’t tour often. They took a long break soon after their second album came out (Aeroplane Over the Sea) in 1998. There was a lot of speculation over their time out of the limelight, but Magnum reported that it came down to health. The mystique is also built upon the songs themselves. Their lyrics are wonderfully descriptive and paint imaginative pictures that are very dark. Two-Headed Boy, for example, seems to be about a boy in a jar…

Some songs seem darker because they are less fantastical (King of Carrot Flowers), others draw from the darkness of history (Holland, 1945).

And somehow the concert captured all of the mystique and dancability. The crowd was very friendly and reverent to the band. Although absolutely no photos allowed. I saw someone take a picture and watched the lead singer star daggers through him!

Elf Power opened for Neutral Milk Hotel. Another pretty hippie band – or as they seem to define themselves an indie lo-fi band. They had an enjoyably mellow sound. They had a more 1960s feel to me. I’m sure I heard a tambourine, which is always a welcome addition to a band. I liked their song The Arrow Flies Close. Actually I liked most of their songs. They were a nice airier contrast to the densely rich sounds of Neutral Milk Hotel.

The only thing that could have made the night better? If they bands played outside as part of a Dinner on the Farm event!