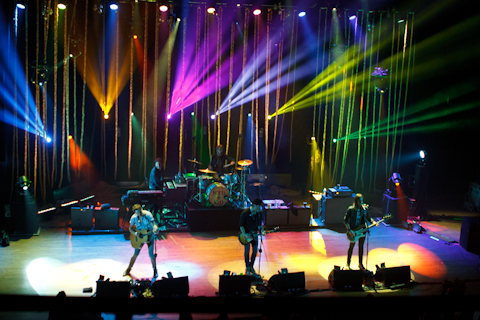 NEEDTOBREATHE is passionate about everything it takes to be a really good band. You can see it in everything they do from memorable live shows to meticulous songwriting that incorporates rich harmonies, uncommon instrumentation and creative extended jams. The Rinehart brothers, Bear (vocals, guitar, piano, organ, harmonica) and Bo (lead guitar, banjo, mandolin, backing vocals) grew up the sons of a pastor in South Carolina with an assorted mix of musical influences. During their college years, collaborations with Seth Bolt (bass, mandolin, backing vocals) who was a studying to be a recording engineer, and Joe Stillwell (former drummer) resulted in the formation of NEEDTOBREATHE.

The band has achieved a good deal of success since releasing their first album under leading Christian label Sparrow Records in conjunction with Atlantic Records in 2006. They have primarily been promoted in the Christian music industry starting with the rare privilege of being featured on the cover of CCM (Christian Contemporary Music) Magazine as a new band and over the years have won nine Dove Awards for outstanding achievement by the Gospel Music Association.

Since Christian music hasn’t had the kind of success at crossing over to Popular music compared to Country, one could argue that categorizing this band in that genre isn’t the best fit. When you search NEEDTOBREATHE on “I Heart Radio” they suggest similar artists as being Switchfoot, Casting Crowns and Jars of Clay, when it would seem musically they are a better fit among Mumford and Sons, Avett Brothers and Imagine Dragons. This label, however, hasn’t gotten in the way of getting their songs exposure in film (P.S. I Love You, When In Rome, Employee of the Month) and television (Desperate Housewives, Castle, Prison Break, The Hills).

The bands biggest achievement may be the fan base they’ve been growing with their tireless efforts on the road playing festivals like Bonaroo and in stadiums as the supporting act for Taylor Swift in 2011. As they now prepare to release their fifth studio album later this year, the Drive All Night 2013 tour will give them a chance to audition some of the new material for lucky fans in select locations including Minneapolis.

The Venue:
The Orpheum was an excellent venue for this show. The room looked pretty full with some open seats along the back edges. Sound was great from start to finish. Bear Rinehart mentioned having played in clubs on previous visits to Minneapolis, but nothing as nice as this.

The Audience:
Most people appeared to already be fans of the band, not a lot of first timers. The mix of men and women was pretty balanced and consisted of mostly young to middle age professionals and college students.

Opening Act:
The musical styling’s of Tennessee band Drew Holcomb and the Neighbors perfectly complement the feel of this tour. The audience was dialed into the performance and many headed out to the merchandise table between bands to support their efforts.

Beginning of the Main Event:
Three sets of lights dangling from above cast a yellow glow on an oversized marching band style bass drum and standup acoustic bass setup in front of a black curtain. The boys drew on one of their strong suits right of the bat launching into an energized street corner jam. Many bands do an acoustic set later in their show to break things up, but starting out in this fashion worked well for NEEDTOBREATHE as it enabled them to create an intimate feel in the theater and establish a connection with the audience. Girl Named Tennessee had the best groove in the four song intro.

Songs that stood out:
The black curtain was raised and the whole stage was lit up as the plugged in part of the show started out with The Reckoning followed immediately by another one of their best upbeat selections was “Devil’s Been Talkin’.”

Bear said, “This is the part of the show where you’re about to lose your mind,” which led into a spirited performance of “Wanted Man.” One of the band’s biggest hits and the tour’s title track “Drive All Night” also kept things rocking early in the show.

One of the evening’s best ballads was “Stones Under Rushing Water” with Ellie Holcomb helping out on vocals, which was a nice touch.

Extended jams:
The Celtic feel surrounding “A Place Only You Can Go” has the power to transport you to a different place and the bands creativity shone through as they broke off into Stand By Me (Ben E. King). Drew Holcomb joined in as his vocal fits the song nicely.

Encore:
The outstanding show was capped off with a memorable three song encore starting with fan favorite “The Outsiders,” leading into the hard hitting “Keep Your Eyes Open.” The show came full circle ending the same way it started with an acoustic performance of a song on the new EP “Difference Maker.” To make it truly unplugged, the four singers stepped away from the microphone and belted out the final harmony from the edge of the stage creating a lasting impression.

Drew Holcomb and the Neighbors 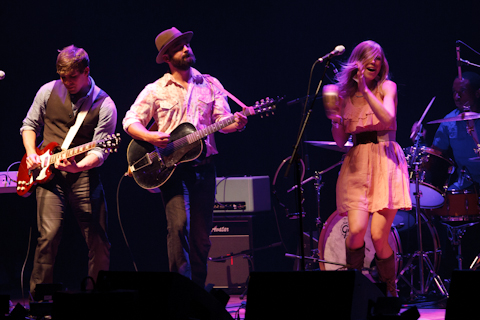 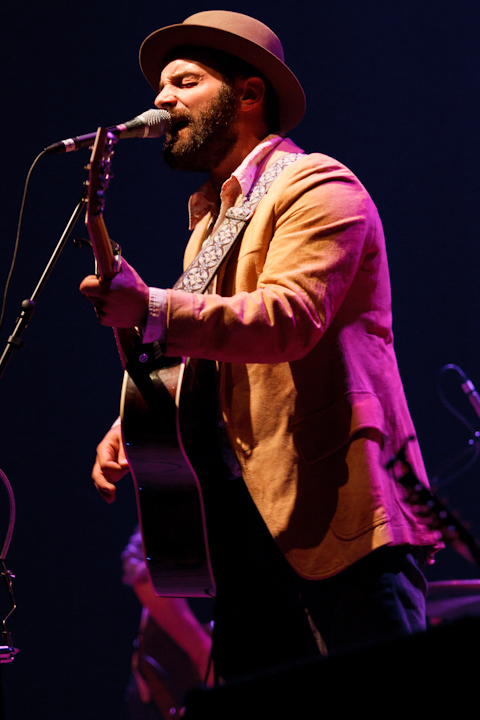 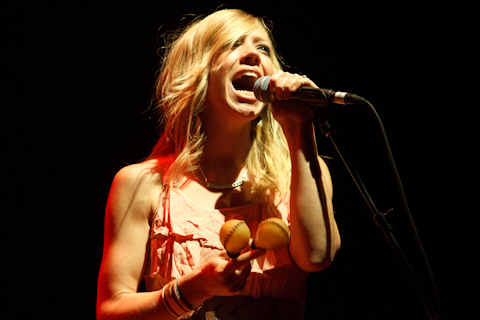 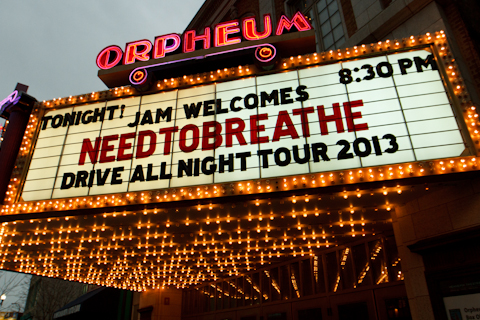 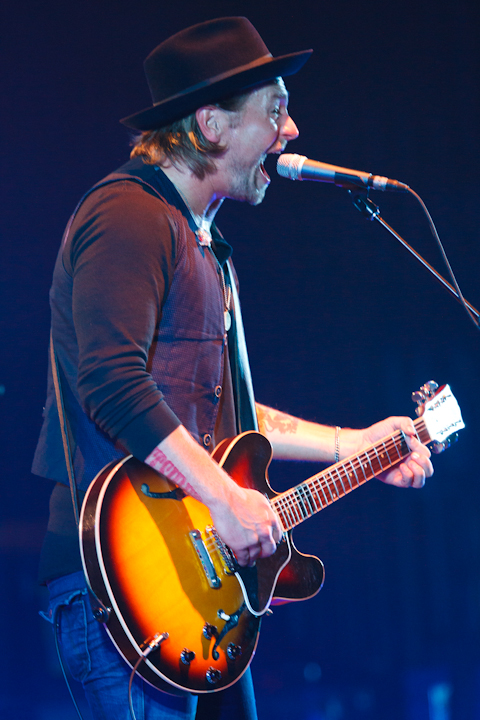 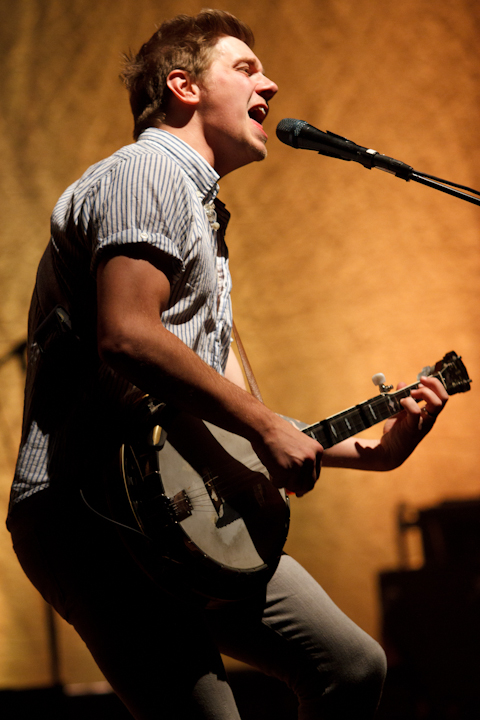 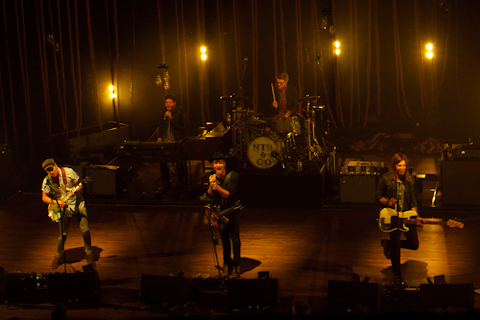 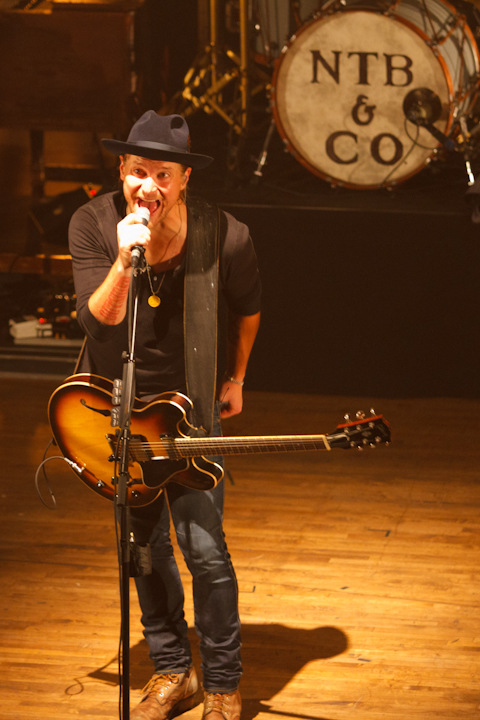 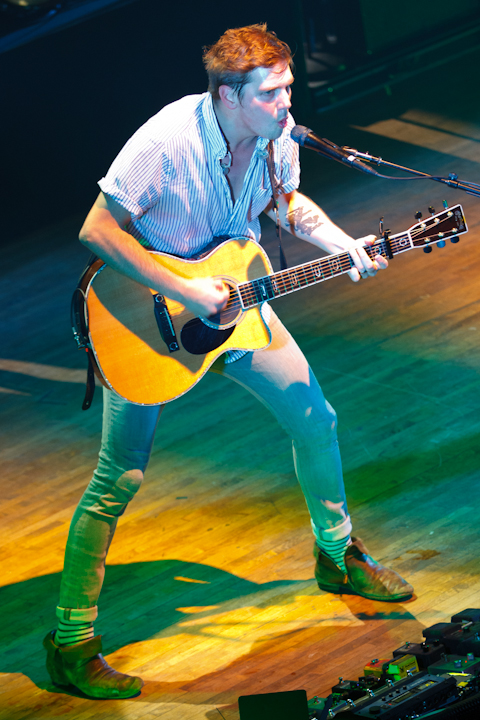 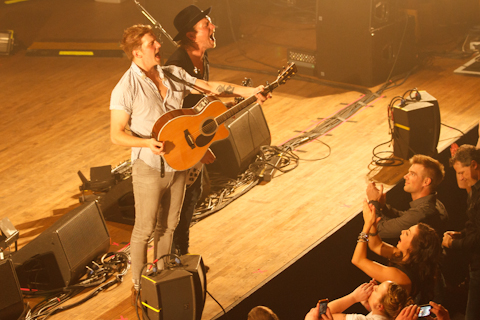 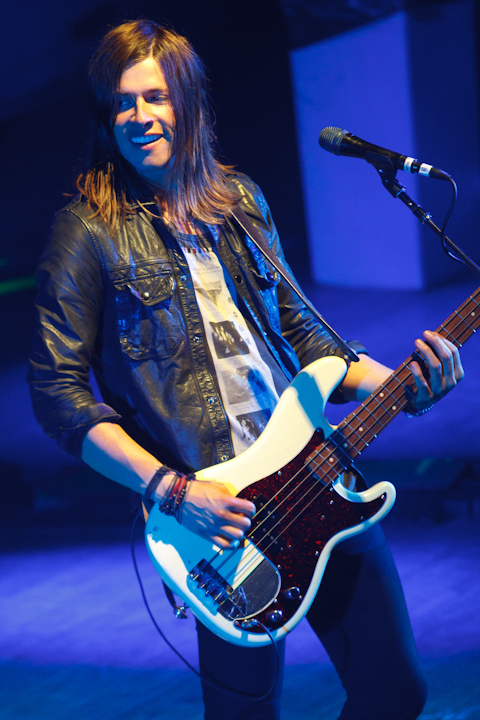 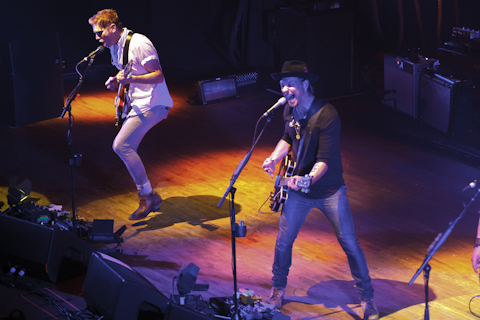 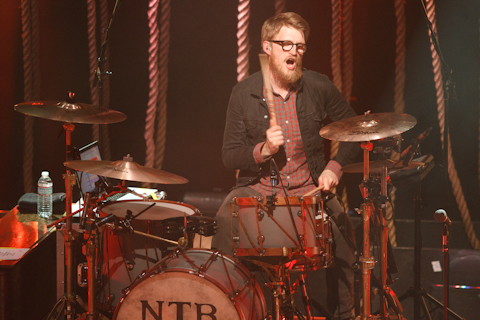 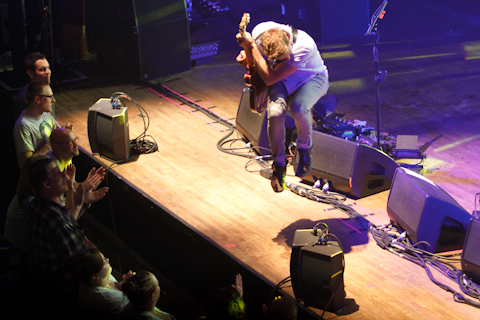 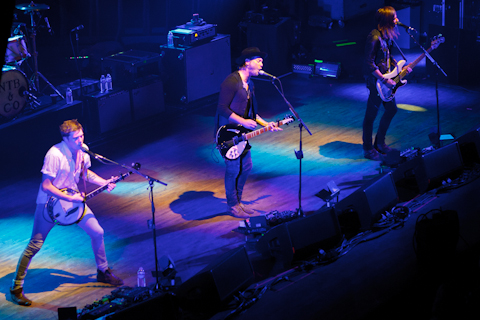 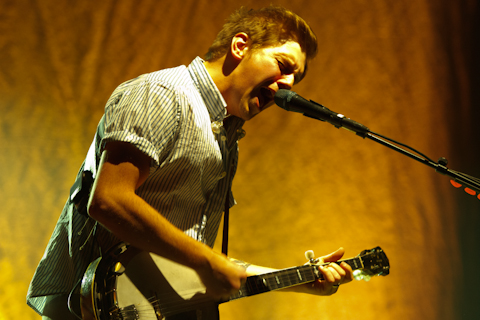 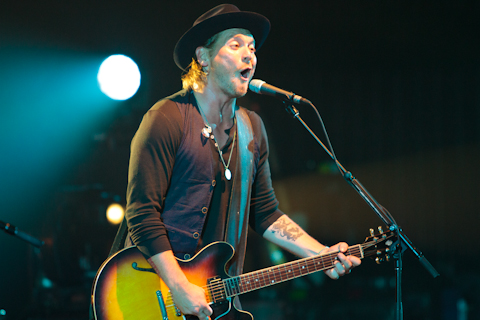 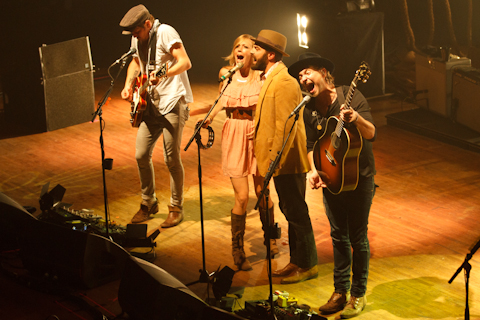 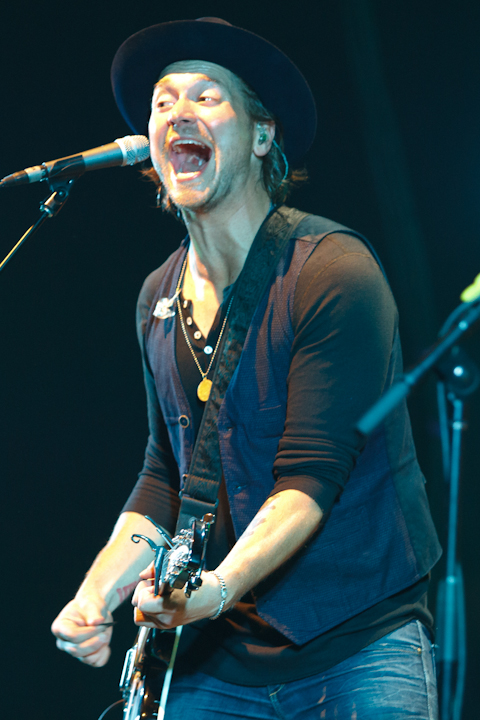 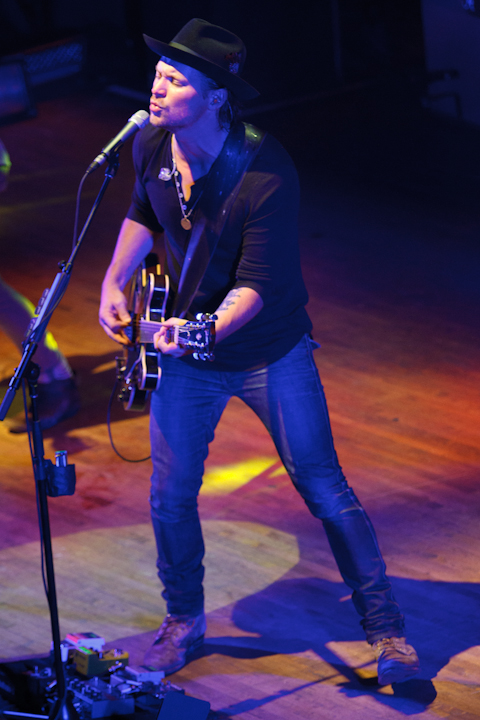 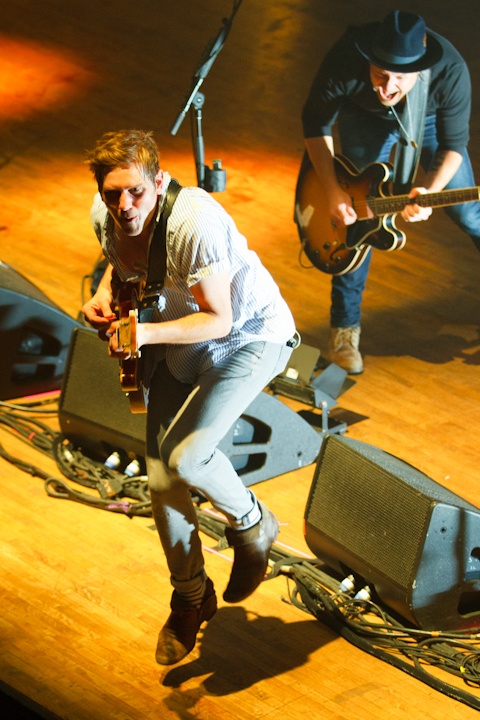 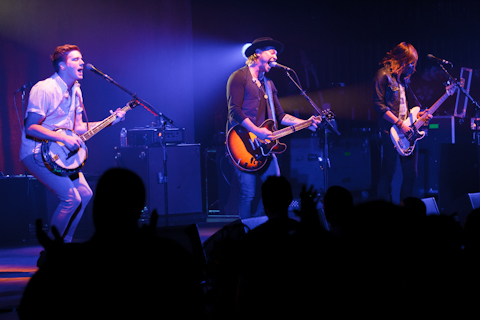 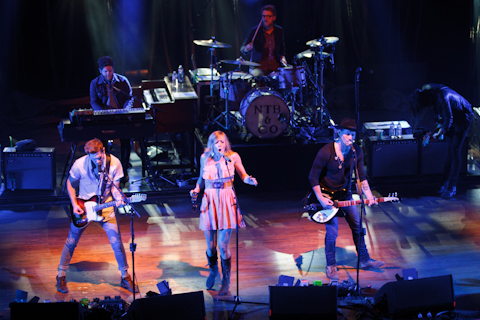