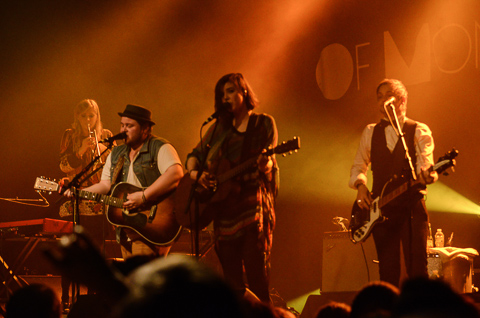 I was lucky enough to see Of Monsters and Men at their Cities 97 Sampler recording at the New Century Theatre on the afternoon of Wednesday, December 19 and then again that night at First Avenue for their second sold-out show in Minneapolis (and incidentally the last show of their tour). As the mayor of myself, I declared it “Of Monsters and Men Day” in my town of one.

At the New Century Theatre, OMAM played on the kitcshy Midwestern towny bar set of Deer Camp: The Musical. The band members (even though they’re from Iceland) fit in perfectly along with their acoustic set. I stand by my original observations of their humble nature I made when I saw the band back in March at the Fine Line Music Cafe. Even though their seemingly overnight success continues to rage, it doesn’t appear to have gone to their (animal) heads. After their four-song set  (“Slow and Steady,” “Love Love Love,” “Mountain Song” and “Six Weeks”), the band answered a few questions from the audience. Brian Oake, Cities 97 DJ, mistakenly said that their album My Head is an Animal was Platinum. “No, it’s just Gold. It’s only sold 500,000 copies” Raggi corrected. Ah, only. It was actually their single “Little Talks” that had gone Platinum. Asked also what the difference between American and abroad shows are, the band agreed that American audiences are more excited. “You can make them do anything,” Raggi said.

At First Avenue, the band put on more of a production. They opened with “Dirty Paws,” which also is the first track of their album, wearing joker and king hats. There really is no better way to start a show than with that song. They buried “Little Talks” in their set somewhere, which was easily the most known song of the exciteable (read: drunk) audience. Their set consisted of their entire album, along with a couple new songs. I usually appreciate softer, more acoustic music. so I thought I would enjoy their mini show at the New Century Theatre more. But OMAM go absolutely wild on stage, you wouldn’t want them any other way. I couldn’t stop watching the drummer, Arnar, who reminded me of Animal from the Muppets.

Getting sloshed around at First Avenue is par for the course, but last night it managed to take away from the music for me (partially my fault). I missed being at the Fine Line. In my first review, I said something like the next time they come to Minneapolis, look for them at the State Theatre. Well, they didn’t quite make it there. But two sold-out shows at First Avenue might have earned them that right the next time they return. It’ll be a little more efficient for them, if anything. But then again, I’m not sure if a seated venue is best of OMAM.

One last note: Elle King opened for OMAM. She was entertaining, and noteable in that she covered Johnny Cash’s “Jackson” and Khia’s “My Neck, My Back (Lick It)” within 30 minutes of each other. She was fun, to say the least.

[Last LAST note: The review is from the Wednesday night show and the photos are from Tuesday night’s show.]

Read Morgan Halaska’s Of Monsters and Men concert review at the Fine Line with photos by Chad Rieder (March 2012).

Of Monsters and Men