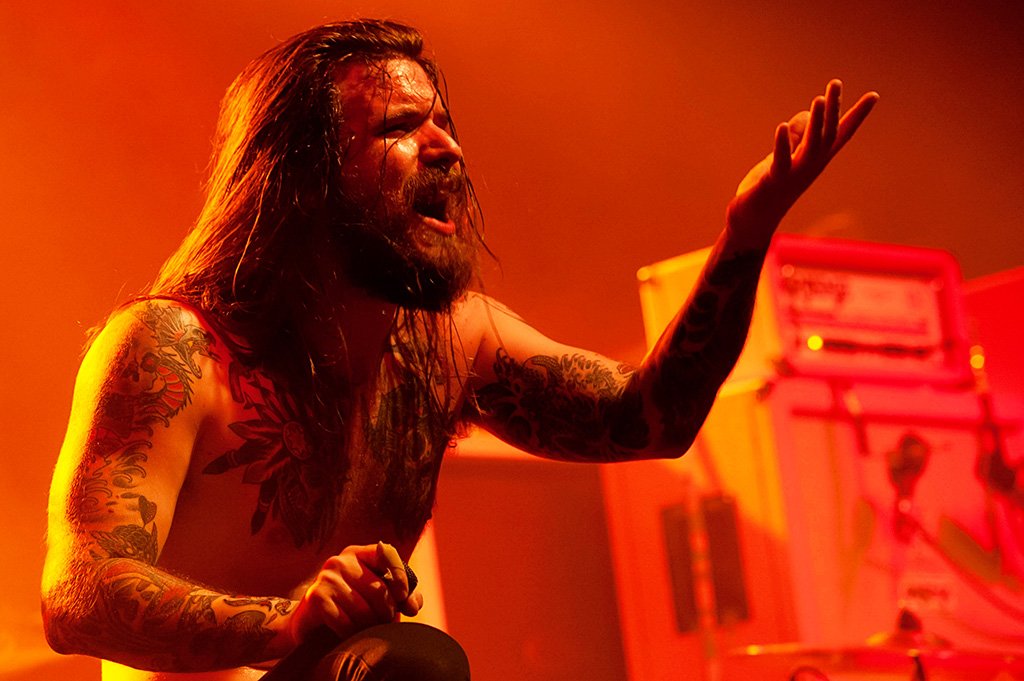 On May 7, 2014, Mastodon played to a sold-out main room show at First Avenue. I had not see them live before then, probably one reason I left feeling amazed. They performed a long set with only brief, banter-free, breaks between songs. At times the frenzy of music was almost all consuming, but also endlessly interesting. Music can be a transformative and comprehensive experience, and Mastodon delivered this on all accounts. For a span of time, to be honest I lost track, the entire audience was lost in an epic labyrinth of sound. Any art form, when delivered with a peak of talent, provides an experience that is inaccessible through any other form. A great song can only deliver what a great song can. A great poem is a great poem and could be nothing else. Mastodon performed something that is possibly the pinnacle of the “prog metal” format, perhaps metal in total.

The band itself was lost behind a barrage of light and smoke, so I can’t say much for their actual presence, but for the overall lack of spectacle, the light show itself provided plenty of visual energy. Creative light placement, color combinations and well-timed black outs all aided in taking the audience to somewhere different and certainly strange. I found myself closing my eyes occasionally, overwhelmed by the volume of sensations sent out from the stage.

Heavy Metal has a lot of spectacle in its past. Alice Cooper, Iron Maiden, and Kiss, among many others, laid the ground work for putting on a visual show alongside of the music. This has gone in phases, often the end game is a sub-genre that becomes somewhat hollow, one that requires costumes when the music falls flat. Mastodon, the reigning kings of all things metal, avoids all of this.

I think it feels very limiting to call Mastodon “metal” to a mainstream audience. Progressive metal is better, but that category is so very broad that it could mean many different things. Certainly, with their insanely complex instrumentation and epic narrative lyrics, Mastodon travels in some part of the prog metal parade. However their music is so dense, so amazing, that unbelievable really works much better. Variations of expletive excitement are good too.

The end result of this is that my earlier statement about spectacle isn’t entirely true. Mastodon creates an elaborate show with amazing production values, compelling stories, and technical mastery. The difference between them and other metal acts is the show they deliver is mostly staged on the micro stage temporarily housed somewhere behind your two eyes, somewhere between your ears, possibly within the vast amphitheater of the third eye.

Gojira, the French metal band, played before Mastodon. They brought the hand-banging crowd to a swirling gyre with their own blend of fast and prog metal. Their sound was a little on the more “traditional” side, but there were unexpected directions in the music that kept it interesting and rocking. I took particular pleasure in the giant inflated whales being bounced around in the crowd. These may have been a reference to Mastodon’s Leviathan, but I like to think it was an acknowledgement of the band’s literal namesake.
Kvelertak blasted things off with a speed test set of metal delivered by the owls of doom. Far from just openers, many in the audience were as excited by them as the following bands.