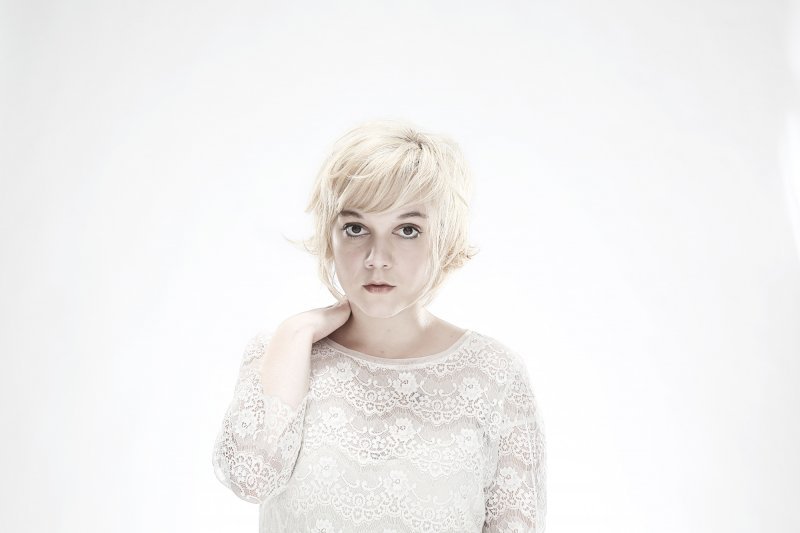 Country punk rocker Lydia Loveless and her band started their set at the 7th St Entry last night playing opener “To Love Somebody” with the same reckless energy most people play their last rocker of the evening. They maintained the intensity of that song through out the whole show–despite or because of the bottle of whiskey they brought on stage with them–even if they didn’t always maintain the breakneck tempo they had on that song. They performed like a rock n roll hurricane, you were either going to get swept up with them or you were going to be destroyed. Loveless has many songs that embody an emotional core similar to the way they performed–you’re either going to be swept up by her or destroyed by her. By the end of their 90 minute set, Loveless and her band had proved that it was better to join them in their musical mayhem.

The band itself was a sight to behold with Loveless looking tiny next to her giant of a bass player, Ben Lamb, who played an upright bass that was almost larger than him for most of the evening. The bass seemed to barely fit the height of the Entry’s stage, and that seemed the same for the whole band. They were all constantly in motion, Loveless and Lamb throwing their long hair around, guitarist Todd May wrenching every note from his Telecaster, and when the pedal steel players stood up to play 12 string guitar it looked like he was boxed in and unable to move, but wanted to so badly. Four songs into the set, it felt like the Entry’s sounds system may have been failing to contain them as May’s backing vocals and guitar seemed lost during “Wine Lips.” Someone passing by me at the time even stated that the sound sucked—but this is the 7th St Entry. It’s a place that even for people under 30 is haunted by the ghosts of Husker Du and The Replacements, where a energetic band can whip the crowd into a frenzy and drag them along all night. Lydia Loveless managed to just do that, and even joked a number of times about Paul Westerberg being in the audience. Neither she nor her band treated that stage as a sacred place, it was their sandbox they got to play in all night. By the end of “Wine Lips,” the backing vocals and lead guitar were loud and clear, and everything remained set up for them to get dirty and have fun for the remainder of their 18 song set.

Loveless and her band testified song after son to the packed crowd why the music press has been swirling around them so much. That buzz includes praise for her latest album and her Record Store Day release 7″ Mile High/Blind, partially gaining steam for its b-side–a cover of Kesha’s “Blindl.” Though they didn’t play the Kesha cover, they pulled out four other rarities (including “Mile High”) strong enough to send people to their computers looking for her exclusive downloads and youtube videos. One of those songs, “Falling Out of Love”—a bonus track for the iTunes version of the album—had the feeling of a punk band running through a doo-wop/R&B ballad from the 1950s infused with the spirit of Hank Williams’ honky tonk mopers. Though the band slowed down for that song, the played just as hard as they did on the rowdier numbers.

The other ghost in the room raised its head on the song “Somewhere Else,” a song noted in recent articles and reviews for sounding like Fleetwood Mac’s “Dreams.” The constant comparisons of Lydia Loveless to Stevie Nicks seems to be a lazy shorthand to describe the music she and her band make, as in “Stevie Nicks fronting a punk band.” Earlier in the concert, her mention of adjusting the “witchy sleeves” on her shirt to accommodate her guitar playing caused a table of 50 year old men yelled out “Stevie Nicks!” and that shout would come from other corners occasionally for the rest of the night.

That sentiment, of wanting Lydia Loveless to be someone else, was an annoying aspect to the crowd’s response to the show that stuck with me long after it was over. Her previous Indestructible Machine had many songs that dealt with the idea of people trying to tell Loveless how to act, and how hard she would pushed back on that idea. Yet here was a crowd, eager and enthusiastic for her to do her take on someone else, whether it was Nicks or Westerberg or Elvis Costello. As she prepared to play her last song, she asked the remaining crowd what they wanted to hear. As voices rang out with song titles, she pointed out that they were basically asking for just covers. That was ok, because as she said, “I think I already know I’m going to play,” she was just taking the time to tune her guitar and had let the crowd shout out requests. That moment was a fitting one that seemed to prove that Loveless had no interest in being someone she’s not for other people, and she was going to make her own choices whether we liked it not.

We should like it. We should like it a lot. While her recorded output has a tendency to lean towards a country sound, her influences are all over the place and that manages to explode beautifully in her current live set. Loveless and her band are certainly capable of being a country band, or a 70s pop rock band, or a 50s doo-wop/honky-tonk mash up, or a hardcore punk band, or a hard edged funk band, but there is no question that they are a pure rock n’ roll band on stage right now, no matter how much twang is in her voice. Then again, maybe the term “rock n’ roll” embodies all of the above. Those influences were present in the two covers she did play, The Pretenders “Talk of the Town” and Prince’s “17 Days.” She’s also stated that the song “Really Wanna See You” was influenced Swedish pop artist Robyn, but each one sounded like her all along. Even though her final song “Crazy” had a violent, ragged Neil Young guitar sound as she played it alone, it was unmistakably her. She played that sound like it was an armor keeping distance between her and her potential lover in the song, briefly dialing it down to seduce us all in. But as the song ends, “So get ready/’cause I know you’re scared of me/Maybe you should be baby.”

It’s that combination of that sort of sentiment, her lack of fear (or at least wearing it all on her sleeves), and appreciation for music that has her labelled as an important new voice, one that writers can only reach back to other artists to use as buzzwords to describe her. Still, it’s just Lydia Loveless and her band on stage rocking out as hard as they can because every song they play seems to mean the world to them and that they don’t care whether you like it or not—but it’s going to be a lot better for everyone involved if get swept up along with them in the fun.