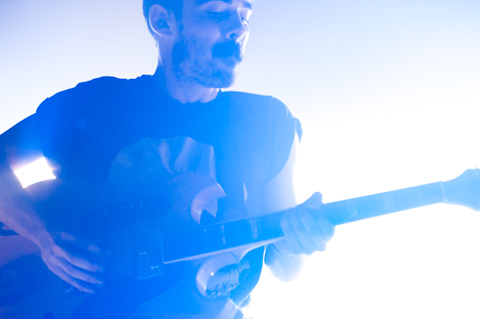 By the time Local Natives took the stage at First Avenue on Saturday, March 23, a sold-out crowd had filled into nearly every inch of the main floor. In the balconies folks peered down from tables or pressed against railings to get a better view.

The California-based quartet has obviously drawn a huge fan base despite only two full-length albums under its belt. Hummingbird, the group’s sophomore effort, debuted at the end of January. Even after parting ways with its bassist Andy Hamm, the group still brought the same level of musicality and innovation as it did with its first album Gorilla Manor. Unsurprisingly, these guys also have the vocal and instrumental chops to deliver an incredible live show.

They stirred up the crowd into raucous abandon on rhythm-heavy tracks like “Breakers” and “Wide Eyes,” yet they could still reel it in for quieter and more intimate songs like “Colombia” and “Airplanes.” Crooning mournfully and contemplatively, Kelcey Ayer’s pop-like tenor shone most poignantly on these two tracks in particular. Inspired by the deaths of two different family members, these tracks were treated with a deep level of sensitivity and expression.

In general, Ayer’s energy and vocal range seemed to carry the band throughout the evening. The group opened with “You and I,” another track from its new album Hummingbird. Coupled with mellow harmonies from the mustachioed Taylor Rice, Ayer led the pack with impressive range and control on this track too.

“World News,” one of the group’s most well-known tracks, prompted the greatest level of audience participation. Unfortunately the noisy fervor of the crowds washed out the group’s otherwise lush harmonies, and the guys seemed to rush just a bit. “Who Knows Who Cares,” which the band played in an encore, was another crowd-pleaser. This track was more controlled than “World News,” though the absence of violin felt a little odd.

The group closed out the set with “Sun Hands,” a dynamic track that seamlessly joins a handful of musical ideas. With impeccable guitar work and increasingly raucous vocals, the guys gave an intense final rally with this piece. Crowds sang or shouted along with this song also, but they still left room for the group to shine.

Superhumanoids, a synth-pop quartet that also hails from California, opened up for Local Natives. Lead singer Sarah Chernoff commanded an otherwise anxious and distracted audience with airy vocals that drifted effortlessly over electric guitars and synths.