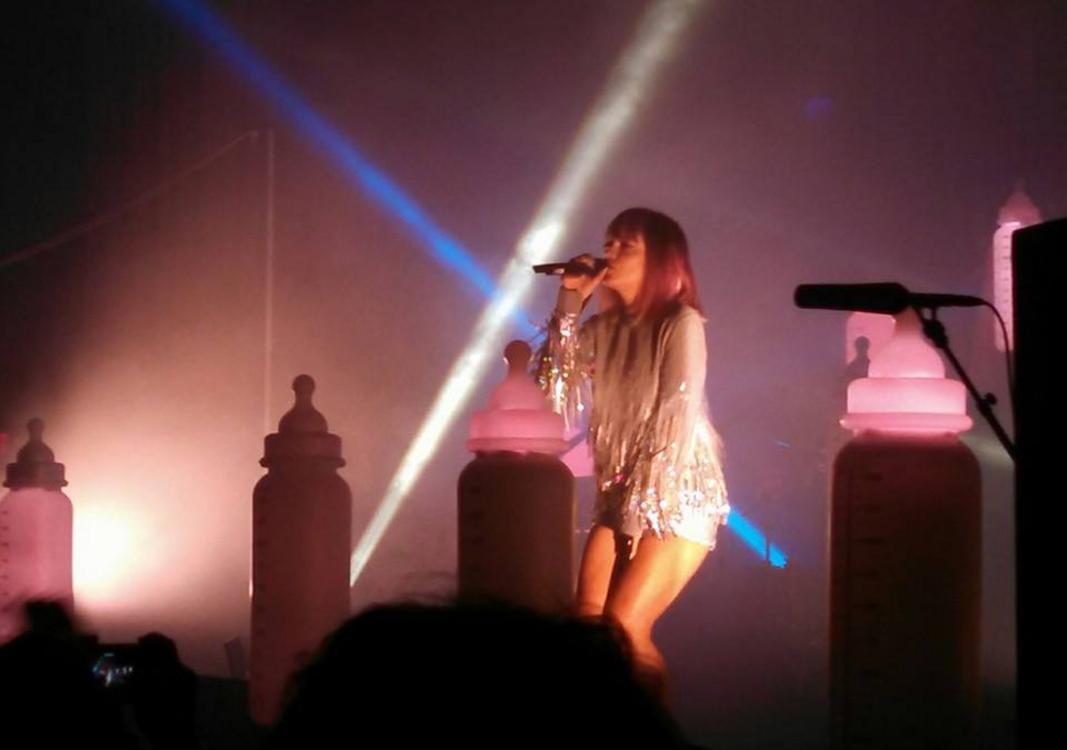 Lily Allen is pop. I guess I wasn’t quite ready to admit that until I saw her live at the Skyway Theatre on Wednesday night because her lyrics are clever and her music hold hints of deeper roots but the staging, costumes and audience all scream pop.

Lily Allen is also cute as button and has a voice that curls up at the corner like a smile. And you know how a smile just makes someone that much more attractive, well the curl in her voice makes her strong and clear tones that much more interesting.

But back to the pop. The stage was set up like a big Target-Center-type show with giant plastic baby bottles everywhere, a nod to Allen’s reason for staying home for a few years. Her chatter between songs spoke nearly as much to her children and her husband (who she is meeting on Thursday after a two weeks apart) as her music. It added a quirky, family dimension to the poppiness that countered Allen’s raunchies comments and British flare for swearing. (I’m a fan of British cussing!) Allen had a few costume changes – from sequenced shorts and leathery bra to a neon orange and yellow cat suit including ears and tail, which she claimed she bought in a stripper shop for $24.99.

Not just everybody puts on a skin tight cat-suit after a maternity hiatus – and few could pull it off as well. The ridiculousness of the outfit punctuated her humorous side. She has a team of dancers who are throwbacks to In Living Color’s Fly Girls. They came out for the encore wearing dog masks for “Hard out Here” (for a Bitch). The humor was over the top and subtle as the same time. The best moment for me was when the mic stand wouldn’t work and she observed with a squeaky-cute voice that she couldn’t work it, her hands were sweaty and shouted for the man who works the mic stand. She’s not afraid on stage or in her music to be clever at the risk being mistaken for taking herself too seriously.

She played a wide range of songs, starting with “Sheesuz” and reaching back to “Not Fair;” she played favorites such as “The Fear” and “Fuck You.” The crowd loved her in an everyone-in-the-room-has-a-crush way. Lots of “I love you” or “I have those shorts” from the audience. Although aside from a love of Lily the audience was pretty all over the place – lots of young people, plenty of older people. Men and women. The horrifically inebriated, the sober. (Saw one girl do a header down the stairs on my way in; I don’t think she’ll remember it, but she’s going feel it!)

Overall I enjoyed the show; I’m not going to sign up for a dozen more pop shows anytime soon but I’d see her again.