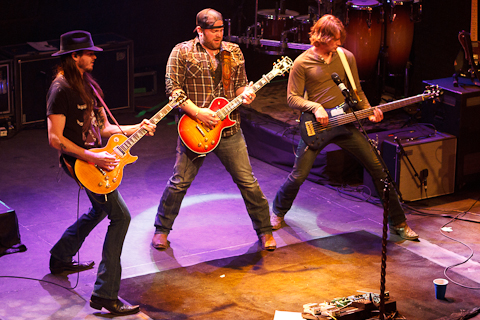 Country music fans packed Mill City Nights Thursday, March 21 to see rising star Lee Brice play a 90-minute set primarily consisting of songs from his current release “Hard 2 Love” and his first album Love Like Crazy. The 32-year-old singer/songwriter chose his path in music after a career ending football injury in college. He is becoming known for his very personal and relatable style of songwriting.

The Venue:
Mill City Nights has had several country shows now and the crowd seems to feel right at home in this venue. The show was sold out, but people did not appear to be packed in to an uncomfortable degree. The sound for Lee Brice’s set was very good on the main floor and in the balcony. The artist did not bring in any special lighting, but the house lighting good.

Audience makeup:
There was a pretty balanced mix of men and women for this Country music audience mostly in their 20’s to 40’s. There appeared to be a lot of couples.

The energy leading up to the show:
Minnesota band The Last Ride opened up the show and definitely had some friends in the crowd. They got things off to a good start and as people packed in for Lee Brice, anticipation started to build.

Start of the performance:
The performance had a solid start playing back-to-back up beat songs with a traditional Country feel.

“Four on the Floor” and “Sumter County Friday Night”

Artist’s crowd interaction:
Brice did a good job talking to the crowd and explaining details about some of the songs. He did make his way to both sides of the stage a couple times and made eye contact and pointed out to people in all parts of the room. Brice thanked the crowd several times for coming out to the show and giving them the opportunity to make a living playing music.

Artist’s appearance:
Brice was all country in a button down shirt, blue jeans, cowboy boots and his trademark baseball cap turned backwards. The lead guitarist was wearing a cowboy hat.

Songs that stood out:
Brice said, “Here is the song that changed my life” before playing the much anticipated hit “A Woman Like You.” Fans were thrilled to hear and sing along to the hit song Brice wrote for the Eli Young Band “Crazy Girl.” Another highlight was the acoustic performance of the current single “I Drive Your Truck.” Brice made a heartfelt dedication to a fan in the audience who had given him a button with the picture of a lost loved one, which is what the song is about. The set ended strong with the title track of his current album Hard to Love.

Encore:
There were two songs planned on the setlist for an encore: “Love Like Crazy” and “Parking Lot Party.” After playing those songs, Brice said he wanted to play a couple more and he finally ended with a cover of Hank Williams, Jr.’s “Family Tradition.”