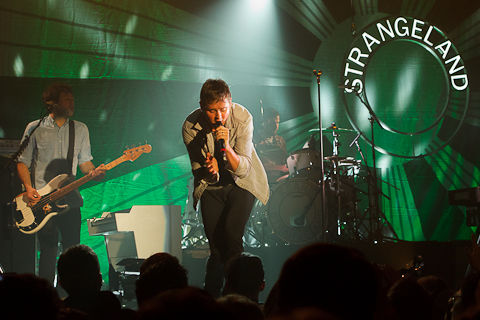 Winter packed a punch Monday, January 21 with temperatures in the double digits below zero as fans of the English alternative rock band Keane got plenty of warmth from their red-hot performance at First Avenue. Vocalist and frontman Tim Chaplin spoke of walking a block outside earlier that day, “Never again will an Englishman complain about the weather.”

The stage was lit up nicely from all directions and you couldn’t have asked for a better sounding mix all night. A simple backdrop contained line art depicting a sun with a round metal sign hanging in front bearing the title of the band’s fourth album Strangeland. The album liner contains a picture showing the clear inspiration for the backdrop, an identical sign for the De La Warr Pavilion, a contemporary art gallery and auditorium located in the band’s home East Sussex England. Like this backdrop, so many things about this band appear simple, but in reality are clearly thought out and have a much deeper meaning. For example, most bands these days choose songs from other writers to compile an album, whereas Strangeland is a themed project that was years in the making.

Keane’s actual stage performance doesn’t contain dance routines, pyrotechnics or confetti canons; they’re just a really good live band playing well-written songs that seem to speak to the masses. Chaplin spent most of the show center stage delivering his solid high range vocals, which are kind of the cornerstone to their sound. Much of the appeal is found in their anthem like choruses that just beg fans to sing along, which happened often throughout the evening. The bulk of the material is performed on keyboard, bass and drums, and sometimes resembles the sound of Coldplay only without guitar.

The 21-song set contained seven tracks from the new album and started out with the upbeat and fresh feeling “You Are Young.” The performance of “Nothing in My Way” early in the set was a standout and achieved significant audience approval. The crowd really was exceptional to the point where several times you could see Chaplin take a few extra moments to just sort of gaze out and soak up the great vibes of appreciation being sent his way. The Strangeland sign lit up each time a song from the new album was being performed like during the infectious “Silenced by the Night.” The attention shifted to Tim Rice-Oxley (piano) during the emotional “She Has No Time,” a tune he wrote for Chaplin during a tough period in a relationship. The upbeat energy returned for “Spiralling,” a fun tune driven by the rhythm section comprised of Richard Hughes (Drums) and Jesse Quin (Bass).

Keyboards were rolled to the front for Chaplin to play a sort of duet with Rice-Oxley on a couple ballads “A Bad Dream” and “Hamburg Song.” Some of the night’s best energy came during “Is It Any Wonder,” which had Chaplin at his most active working all sides of the stage singing out to fans. The regular set concluded with “Bedshaped”; after which the crowd united in a strong chant for, “Keane!” Back on stage, Chaplin seemed sincere in saying he enjoyed every moment of the performance. He said that First Avenue is a favorite venue of theirs to play and it’s the fan’s here that really make it special. The memorable show ended strong with a 3 song encore anchored by their big hit “Crystal Ball.”

Props to supporting act Youngblood Hawke, a well-matched choice to set the tone for the evening. Their high energy set was driven by drum beats and was well received by the audience.