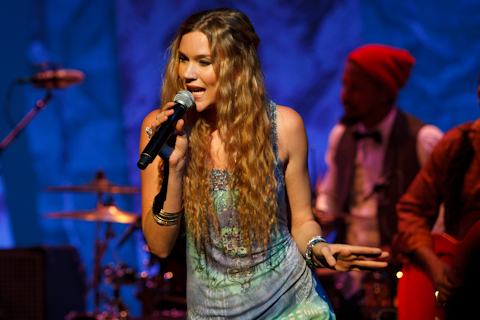 British singer Joss Stone brought her Soul Sessions Tour to The O’Shaughnessy Thursday evening as part of their Women of Substance series. The venue’s intimate feel and great acoustics make it the perfect venue for this high-quality music performance. Although Stone brought a large band with her (three horns, three backup singers, guitar, bass, keys, drums) the stage set retained a nice open feel leaving her room to dance and twirl about barefoot like the free spirit she is rumored to be. The backdrop made up of flowing crinkle curtains was nicely lit with mostly shades of blue and purple adding a warmth that assisted in creating the right mood for the tunes.

Although many comparisons can be made, Stone does not clearly fit into any one stereotype. Her stage presence comes off as young and cute with long curls like Nicole Kidman and a carefree fun sun dress like you might expect from Colbie Caillat. When she speaks to the crowd you hear all the typical British phrasing you would expect when listening to Kate Middleton. In great contrast, her huge singing voice has a maturity far beyond her 25 years and contains qualities found in the style of Alicia Keys and Mary J. Blige.

Stone opened the performance with “For God’s Sake” from her latest release The Soul Session’s Volume 2. Although she’s had other successful releases in between, this album is the follow-up to her multi-platinum debut The Soul Sessions from back in 2003. It’s so refreshing to see a singer performing this kind of timeless inspired R&B when many others known for their singing ability are letting their voices become the backdrop to the now typical and overplayed dance beats found in the newer music of Christina Aguilera, Mariah Carey and Rihanna. This music has some real class and allows Stone to reel you in with her controlled lower register during a song’s verses and blow you away on the chorus where her real power lies in the higher octaves.

Stone’s set included known singles like “You Had Me,” “Super Duper Love,” and “Pillow Talk,” but she also commonly strays from the planned set based on what mood she feels the crowd is responding to, or she may be inspired to go a different direction in response to a random fan request. She ended the evening tastefully with fan favorite “Right to be Wrong.”

Supporting act Vintage Trouble started the evening out strong with a powerful set that got the crowd’s attention. Front man Ty Taylor delivered an inspired vocal performance backed by some nice work on a Les Paul by guitarist Nalle Colt.