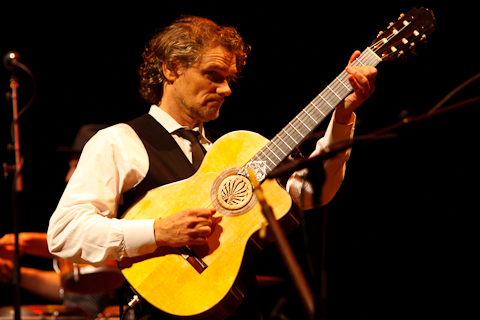 Although most of us don’t get the opportunity to dine in the café’s of Seville or dance in the clubs of Havana, it is possible to experience a sense of that cultural vibe in our own city through live music performance. That’s just what took place Thursday, May 9 within the doors of the fabulous Pantages Theatre where Canadian guitarist Jesse Cook and his band transported fans with their style of Rumba Flamenco. Cook is touring in support of his current release “The Blue Guitar Sessions,” a definite shift from the fiery upbeat tunes he’s best known for. Although the mood of the album is “blue,” the melodies are beautiful and built around the idea of leaving space to appreciate how Cook crafts each note to deliver the intended message.

The Venue:
In addition to being a beautiful room with a lot of history, the Pantages has the most intimate feel of the downtown theaters and acoustically did this show plenty of justice. The performance is primarily instrumental with a lot of dynamics that rang out crystal clear with the aid of a professional mix. The stage setup basically consisted mostly of interesting musical instruments and a few clever props like an old fashioned suitcase that does a good job of hiding Cook’s guitar effect pedals.

The Show:
Having more than enough material with eight studio albums, “An Evening with Jesse Cook and his Band” consisted of two separate sets of music and required no supporting act.

First Set:
Most of the material in the first set came off of the first several albums released between 1995 and 2000. The performance started out with one of the upbeat tunes that defined Cook’s sound, “Mario Takes a Walk.”

To begin “Tempest,” Cook and Hernandez engaged in a duel of finger picking skill to see who was fastest and who could hammer out the most complex run. All five demonstrated good interaction and use of the stage as they performed together in a line at the front of the stage.

“Streets of Seville” led into an entertaining percussion solo as Chendy tapped out a dynamic rhythm on what looked like a porcelain vase. Church contributed his amazing skill on violin, demonstrating a signature sound that really stood in each song it was utilized.

The strongest song in the first half of the show was “Bogota by Bus,” which is driven by an infectious Rumba groove.

The Audience:
Most people in attendance were older fans of music and the arts. There were some families with children and students in attendance probably for exposure to world music performed by these expert musicians. The music was also therapeutic special needs fans in attendance.

Second Set:
A jungle like scene lit the backdrop to help create a slightly different mood for the Middle-Eastern sound of “On Walks the Night”.

Cook did a good job interacting with the crowd throughout the night. He talked about finding out that a couple danced the Argentinean Tango to his song “Breathing Below Surface” on “So You Think You Can Dance.” He joked about having to try and find it on the internet because he doesn’t have cable TV and never heard of the show. The song ended up producing another standout moment with Church’s haunting violin solo.

Cook spoke a bit about his inspiration behind the new album before demonstrating how well it translates to live performance. “Fields of Blue” has a beautiful melody and he joked about it being the happiest of all the sad heartbreak songs on the album.

“Café Mocha” was one of the night’s best hits. It was a quick return to high energy and set the tone for the last part of the show.

Cook asked the audience if they were starting to feel like they were ready to have a Rumba party. A Rumba Medley including “Havana” and “Rattle and Burn” brought the crowd to their feet for a high spirited, fun conclusion.

Encore:
A surprisingly loud round of applause screams and whistling brought the band back out for a 3 song encore. They came up with the best way to make the encore standout in an instrumental show – add singing. Cover tune “Cecilia” just felt good and was familiar enough for people to sing along. For a creative twist, the band came out into the crowd for a truly unplugged version of “Fall at Your Feet”, which gave Church the opportunity to show off yet another talent with a surprisingly strong voice that filled the hall. Cook and Church returned to the stage, but remained unplugged for the fitting last song “On Our Way Home.” 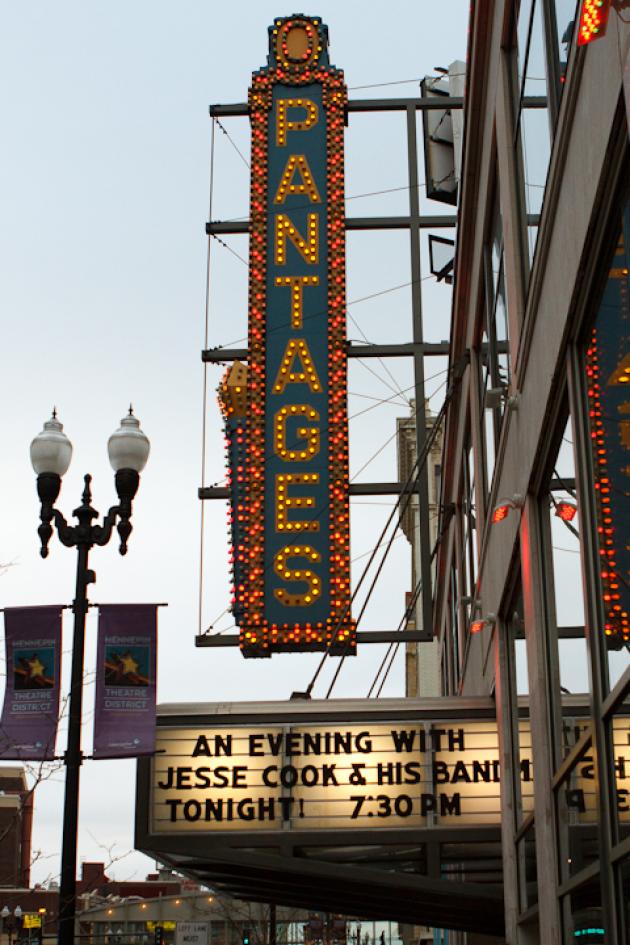 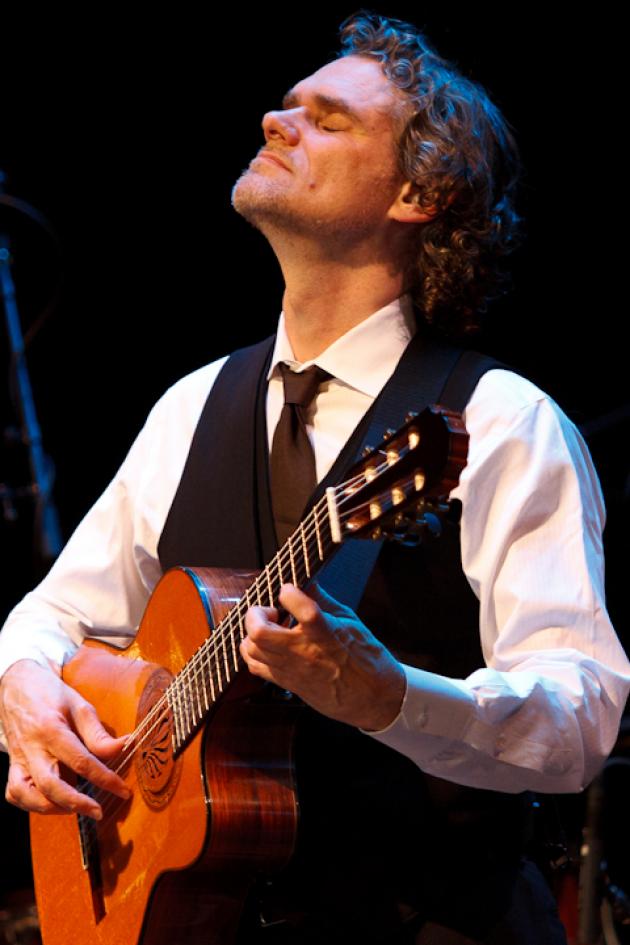 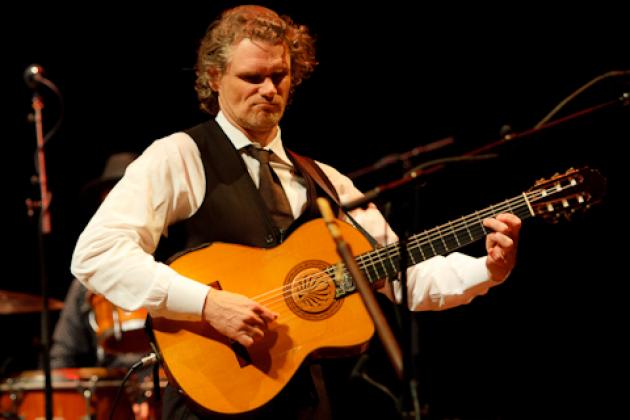 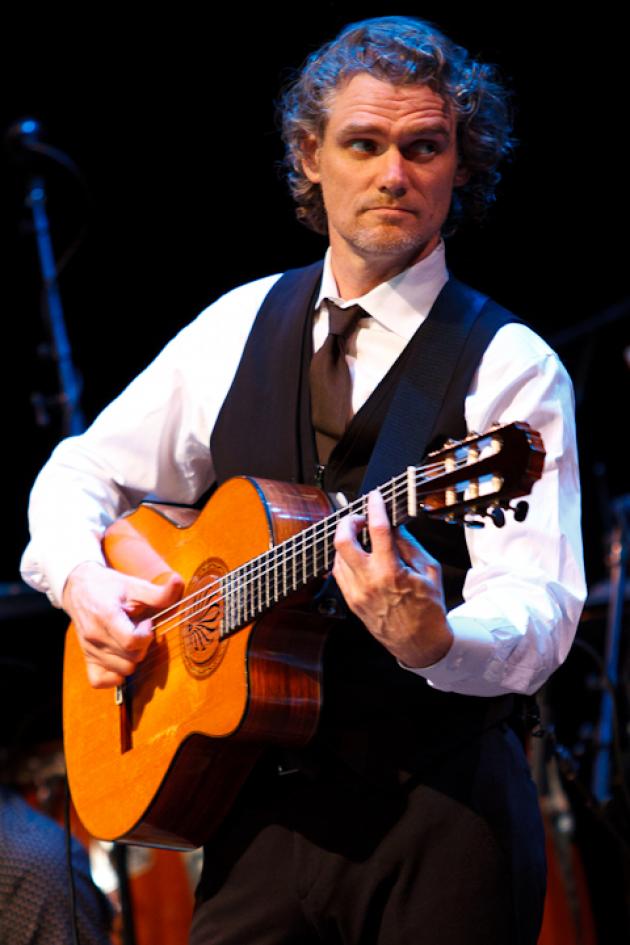 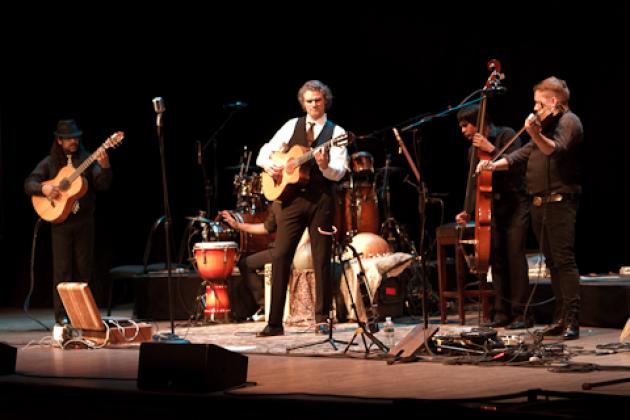 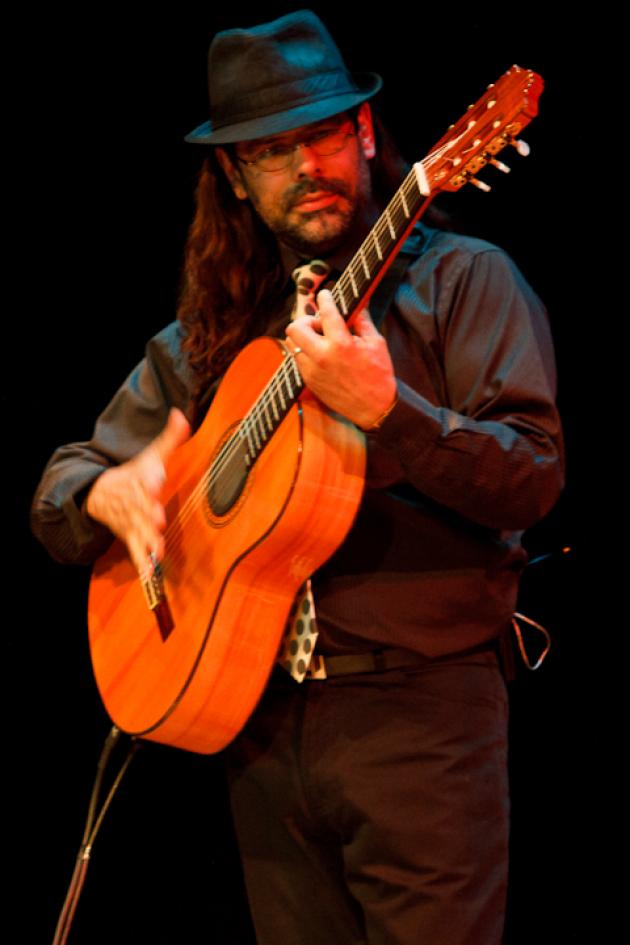 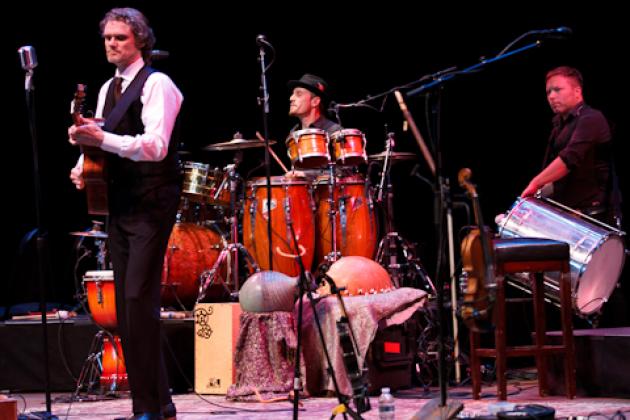 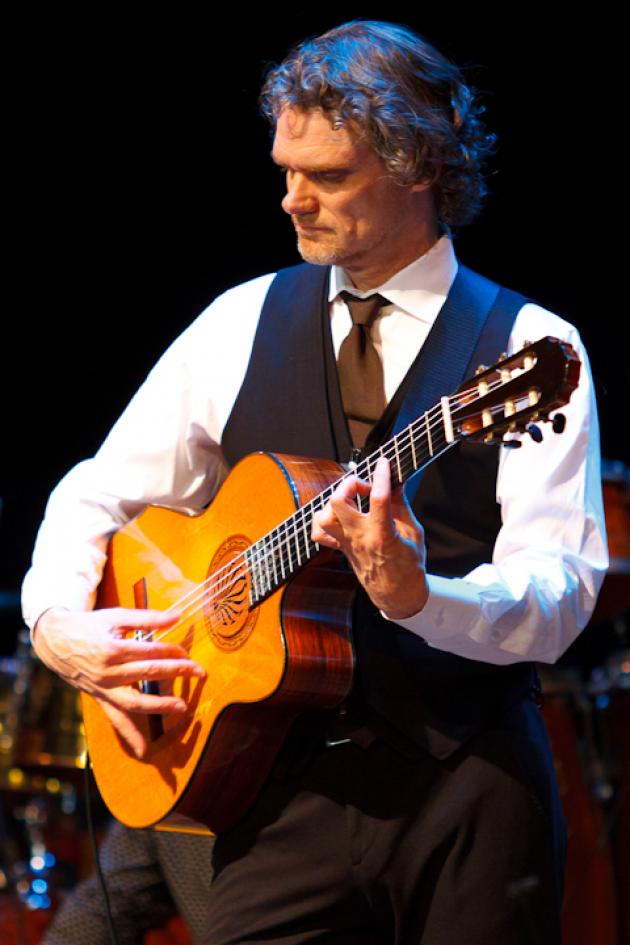 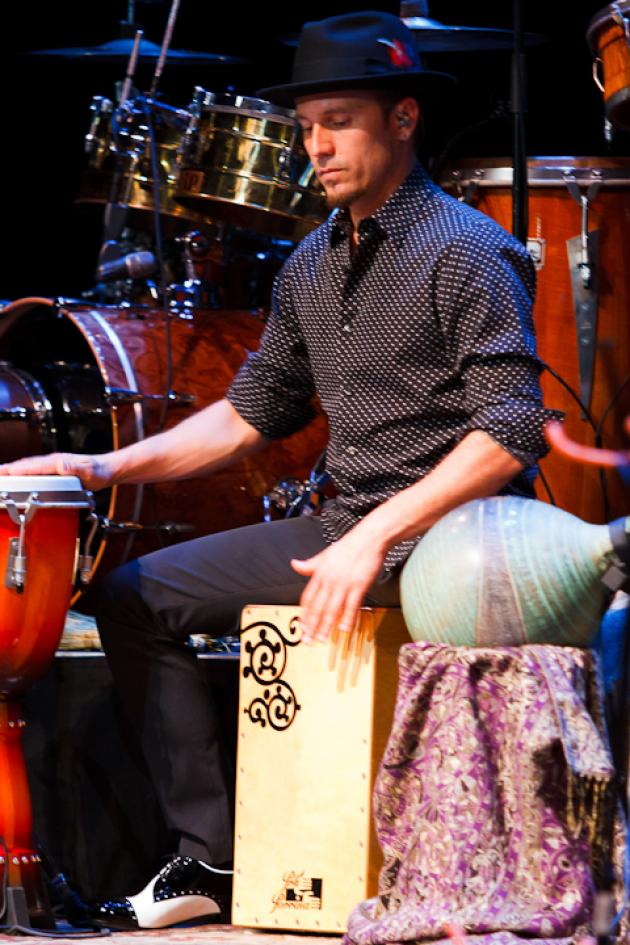 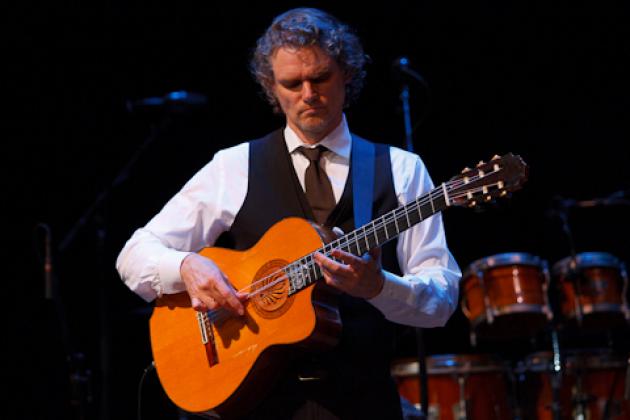 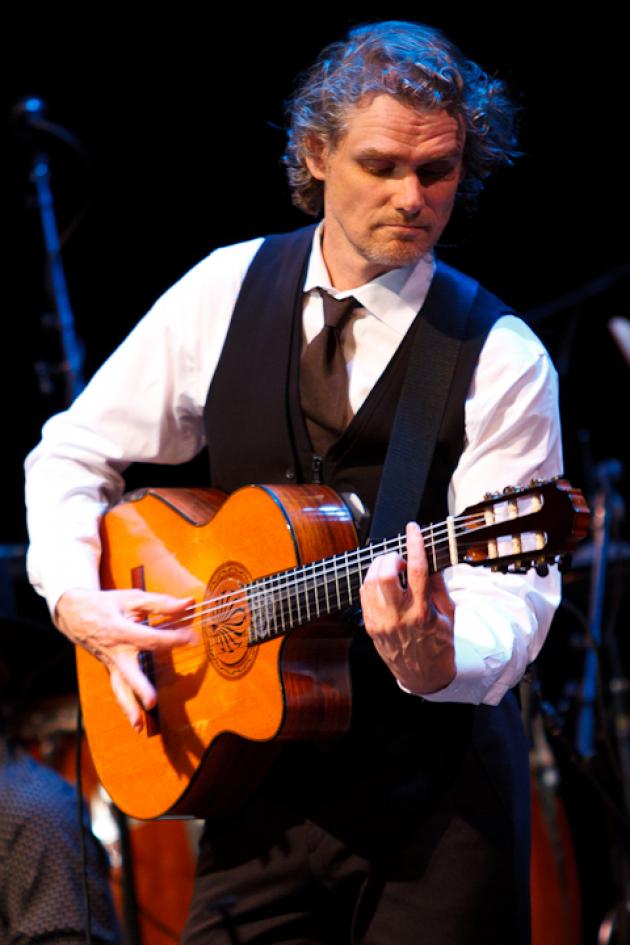 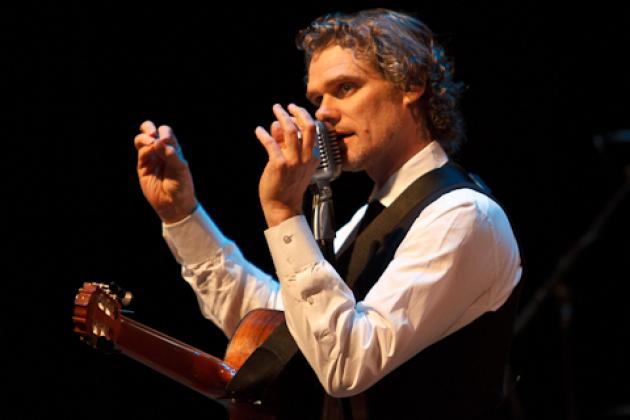 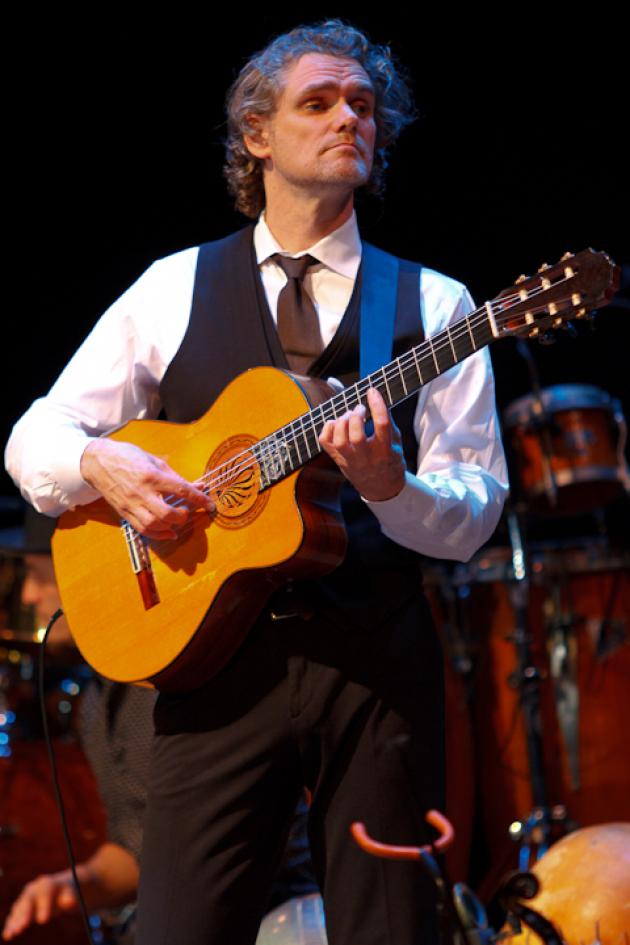