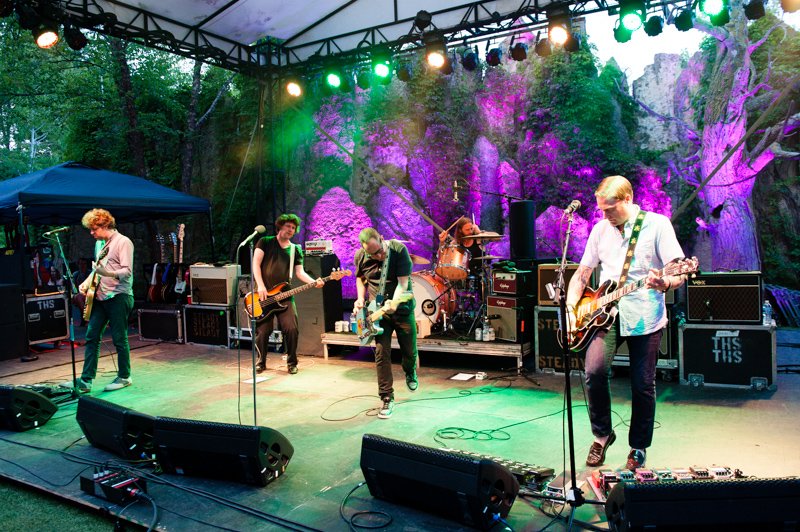 At the very end of the show, with the sold-out crowd loose and warm and happy, singer Craig Finn still fidgeted around as if he had ants in his pants. The band was rocking “Killer Parties,” the final track from their 2004 debut Almost Killed Me, and Finn who earlier in the set thanked the band’s family, friends, and even former teachers who were in attendance; finally thanked the capacity crowd who were grooving along. After smiling and hugging his hands across his chest, the singer bellowed out with his heart, “We are all The Hold Steady!”

I’ve seen this several times before, and being a resident of the Twin Cities makes me believe it. But I’ve long wondered how the rest of the world responds to The Hold Steady. With references galore of Minneapolis and the area, I have a feeling the band’s live show doesn’t hit with near the impact that it does here. A capacity crowd at the Weesner Amphitheater made it obvious that they still have a lot of love in the Twin Cities, even though their most recent two albums have not been very memorable in the least.

The Hold Steady started the night off with “Positive Jam,” the poetic opener from their debut, and then worked through nearly two hours of both classics and new songs before bidding farewell. Early in the set, Craig Finn said “This one goes out to anyone who was at our first show at the Triple Rock eleven years ago.” The band then cranked through an amped-up version of “The Swish.”

Another highlight was “Chips Ahoy!”, from the band’s fantastic 2006 album Boys and Girls in America. “Southtown Girls” from that same album brought the biggest response all night, with Finn taking the crowd on a trip through south Minneapolis. Guitarist Tab Kubler, looking clean cut with short parted hair, laid down a mean solo, and Finn rewarded him with a high-five and a big smile afterward it, while the rest of the band continued playing. “Your Little Hoodrat Friend” followed and ended the set powerfully, with a good part of the crowd throwing their fists up in the air.

With exception to “I Hope This Whole Thing Didn’t Frighten You,” the first single from their 2014 release Teeth Dreams, songs from the new album didn’t pack quite the punch. “Spinners” sounded good, yet also like a regurgitation of every Hold Steady song I’ve heard.

From the beginning, the band sounded fantastic and the crowd filled the cozy outdoor amphitheater with a communal and electric buzz that didn’t subside. This was one of the most solid performances that I’ve seen from The Hold Steady in several years. As a fan of rock-n-roll music, Minneapolis, and killer parties, it is nice to be reminded sometimes that we are all The Hold Steady.