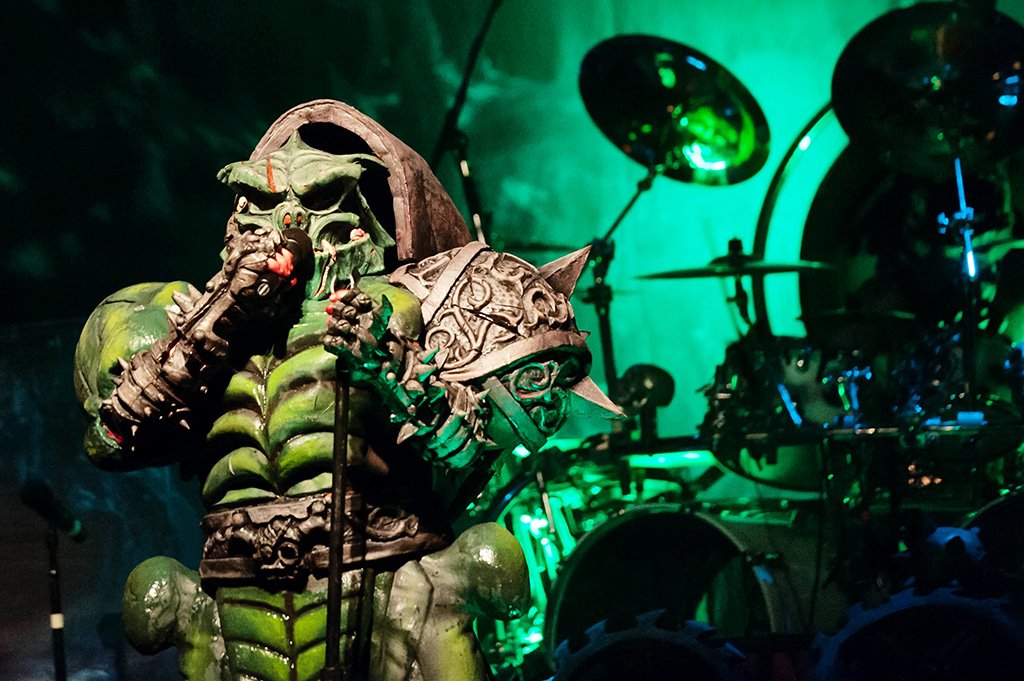 To say something was missing in regards to this GWAR show may be a little on the nose. After all, this is their first tour minus frontman Dave Brockie, who for years played the role of Orderus Urungus, and who died of a heroin overdose earlier this year, so that “something” that was missing should seem fairly obvious right from the start. But there seemed to be a sense of enthusiasm missing from the act, an act that, while still very entertaining, felt at times that it was going through the motions emulating the sort of vile, grotesque, and offensive stage show that GWAR has come to be known for rather than sincerely committing to it.

Now, this is not at all to say this was a bad show. Let’s get that really clear. As said before, it was entertaining, and overall it was well paced and well performed. The show was built around a narrative that was meant to explain the disappearance of Oderus and to effectively write his fate into the GWAR mythos, honoring the character while keeping the door open for GWAR’s continuation. Such is the beauty of GWAR, a group that seems more like a band of tabletop roleplayers who decided to LARP with instruments one day, that they have constructed an entire story which makes each of them as individuals replaceable in a grand and potentially never ending narrative. But watching that narrative play out was perhaps a bit more melancholy than intended. While many a creature met a bloody end on the stage, and the crowd was soaked in a rainbow of fluids by the end of the show, the event seemed in the carnage.

The performances on stage were, for the most part, great. Mike Bishop, the former Beefcake the Mighty turned Blothar, is a solid choice as the new frontman for the act, with a similar vocal range to Oderus. Although there were occasions where it felt as though the vocals were being lost in the wall of sound blasting out from the heavy instrumentals (particularly the vocals of Vulvatron, who seemed to be having serious mic troubles through the show), the sheer frenzy of the music was enough to keep things going.

There were some questionable moments during the show, particularly during one song when a giant heroin needle was dragged out to the stage and the GWAR crew were feigning a foray into a spiral of drug-fueled depravity. On one hand, it seems like poor taste to make drug references on a tour honoring your friend who died of a heroin overdose. On the other hand, it’s GWAR, and they’ve sort of made a living on poor taste. These are people who knew Brockie, and it seems inappropriate for an outsider to make a judgement on a joke or a bit and be offended on a stranger’s behalf.

Perhaps Blothar put it best at the end of the show when, following a rendition of the Pet Shop Boys “West End Girls,” he declared that “It will never be the same. But nothing ever is.” This tour, by its very nature, probably has to be a little off. It has to take a brief detour into a kind of sentiment which is extremely uncharacteristic of GWAR to say goodbye to the most important character to the mythos. Whether there can be a return to form in the future is anybody’s guess, but for now, “GWAR lives.”