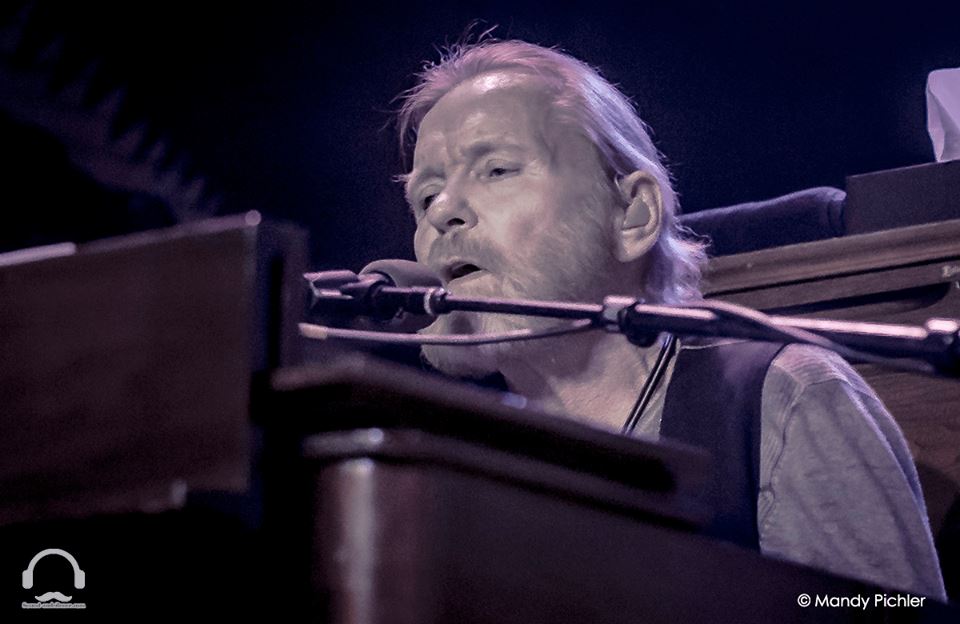 Gregg Allman and his eight piece traveling band, in the midst of a spring tour, played to a sold-out house at Hennepin Theatre Trust’s Pantages Theatre on March 27. The storied bluesy-rock icon still wears his hair long and his tattoos proudly. He looks great and his signature voice still resonates with a tender clarity that welcomes you while his rasp makes you ache. As a founding member of the legendary “The Allman Brothers” band, he’s been writing and performing for 50 years—give or take a few-but his talent, and contribution to music history, is timeless.

Allman, on vocals, guitar and Hammond B-3 organ, was playing his customarily stage right position for most of the show. He shared the spotlight (center stage) with guitarist and music director Scott Sharrard. The band was rounded out with Ron Johnson on bass, Peter Levin on keyboards, Steve Potts on drums (thanks for standing up during intros so we could all see’ya!), and Marc Quinones on percussion. Jay Collins, Art Edmaiston and Marc Franklin were the horn section, delivering some fantastic, latin infused melodies throughout the show, let alone epic “horn-as-guitar response” solos as needed. Blues, latin, jazz, funk and rock-n-roll all shared the stage with enthusiasm and some might say, perfection. It’s a world-class band who peeled through Blind Willie McTell’s “Statesboro Blues,” Muddy Waters’ ” I Can’t Be Satisfied,” Sonny Boy Williamson’s “One Way Out” (the encore) along with Allman signatures like “Whipping Post,” “Midnight Rider,” “Dreams,” “Soul Shine” and others.
The audience was full of die-hard fans showing their love with standing ovations throughout the night. The night started with “Statesboro Blues” off “At Fillmore East” followed by “I’m No Angel.” These two songs happened to illustrate my personal Allman history. I was able to see the show with my cousin, who not only used to have hair that rivaled Allman’s, but who also had taken me to see Dickie Betts at the Cabooze years ago (one good turn deserves another). We talked about our Allman purchased ‘firsts’. His being in 1971/1972 with “At Fillmore East” that features “Statesboro Blues” via an old record club subscription, mine being Gregg’s “I’m No Angel” (admittedly more ‘pop’) album in 1987 via Positively 4th Street (or was it Cheapo?).
Allman brings the story of rock and roll with him in his fans who range from whiskey-drinkin’-and-dancin’ women (you know (and we love) who you are) to stationary, solitary men giving witness to the musicians with adoration, awe and a little bit of envy. It was a little bit like going to church. We have nothing but praise for a long and winding career full of hard living and redemption. Although there were a few refrains where you could hear audience members singing along, it was clear people came to primarily party with and give props to a guy who’s music carried them through the tumultuous late ’60’s and ’70’s and has sustained them ever since.
After this spring tour, Allman continues on throughout the summer, often sharing the gig with The Doobie Brothers. Find out details on his web site: www.greggallman.com and get your fix while you still can.