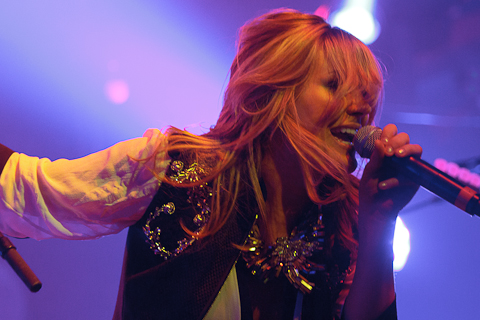 With so much of mainstream music today still being performed against preprogrammed dance tracks, there is a hunger to see real bands playing honest music on live instruments. Grace Potter and the Nocturnals served up a generous helping of new music inspired by the late ‘60s/early ‘70s era to a sold-out crowd at First Avenue on Friday, January 25. Tickets for the first show were gobbled up quickly resulting in a second show added Saturday night as is happening in many locations throughout the country. The Roar Tour, supporting the release of The Lion, The Beast, The Beat, takes the band across the US before joining up with The Avett Brothers for some international dates.

There was a feeling of anticipation in the room since it appears many in attendance had seen the band play with Kenny Chesney at Target Field or the Sue McLean Music in the Zoo series show and knew they were in for a treat. Well they got it as this show rocked First Avenue harder then it’s been rocked in awhile! Potter said “We’re playing two nights here, but don’t worry we’re not going to hold back.” She first appeared on stage dressed up in a black vest, short leather skirt and stockings and swung her long blonde locks about as she ignited the crowd with “Medicine.” The band sounded super tight and is no doubt playing at the top of their game. Potter grabbed her signature series Gibson Flying V for a couple tracks off the new album “Never Go Back” and “Turntable.” The performance of “Oasis” showed off how perfectly complimentary the unique guitar styling’s of Scott Tournet (now clean shaven with a short haircut) and Benny Yurco are.

After the show began with such fervor, the stirring “Apologies” allowed a calmer space to really appreciate Potter’s amazing vocal tone. Her range has this sweet spot that she plays around in which has the ability to speak directly to your soul and is really something special. This mellow vibe continued to play out during the band’s current single “Stars,” which included a tasteful dueling harmony guitar solo between Tournet and Yurco that got great crowd reaction. It also included the coolest lighting effect of the night, a single bright star like glow that reflected a bunch of individual rays out to all parts of the room.

There was really a feeling of depth to this show and it kind of took you on a journey. One turning point was very evident after Grace sat on the edge of the stage and threw her shoes off saying, “Let’s get to know each other a bit better, it’s about to get a bit dirty.”  She removed her vest and went crawling across the stage like a lioness for the sultry “2:22.” She appeared to kind of morph into Janice Joplin at this point and her stage presence was wild and sexy as she leaned back to back against Tournet during his impassioned guitar solo.

The mood shifted again for the fun jam band feel of “One Short Night.” Michael Libramento’s bass playing was a standout during this song where a glance out into the audience returned a view of people dancing with their party faces on. The band demonstrated an exceptional skill in knowing just the right song parts to elaborate on giving you an even better appreciation for its composition. This truly is a different caliber show compared to what most bands are putting out there. Perhaps it comes from their obvious commitment to the ‘70s vibe felt in so many aspects of this band, but the result just rocks a little harder then what we’ve grown to expect in a typical show.

Potter fittingly played a few bars of “Amazing Grace” on the Hammond B3 as an intro to the gospel infused “Big White Gate.” It was all up tempo after that as Potter charged back onto stage wearing a sparkling silver and black diamond checked jacket saying she’s trying to get everyone a little bit hotter for “Hot Summers Night.” Another side of Potter’s vocal ability was on display with her seemingly boundless ability to infuse a good rock-n-roll scream wherever she chooses. I doubt there’s any other female vocalist performing their art with this kind of enthusiasm on any given night, much less show after show.

To end the set, the band delivered a ferocious one,two punch with “The Lion, The Beast, The Beat” featuring Matt Burr on drums, setting up their best known hit “Paris (Ooh La La)” ending in a spectacular TKO.

The crowd’s roar was deafening, inspiring Potter to say, “You guys are unbelievable, so excited to be coming back tomorrow.” The three-song encore started with the thought provoking “Colors,” which she dedicated to someone very special who survived cancer at the age of 28 and got through adult depression at 31. Potter grabbed the Flying V and a slide for a bluesy solo performance of “Nothing but the Water” prior to closing the night out with a Nocturnals infused cover of Survivor’s “Eye of the Tiger.”

The evening got off to a great start with the unique sound of Langhorne Slim and the Law. The four piece consisting of Langhorne Slim (vocals), David Moore (Keys / Banjo), Malachi DeLorenzo (Drums) and Jeff Ratner (Bass) sparked the audience with a really entertaining and unexpected performance. Slim said it was a goal of his to make it onto the stage at First Avenue.

Read Jay Gabler’s review with photos (by Jay and Meredith Westin) from the 2010 Basilica Block Party with Grace Potter and the Nocturnals on the bill (July 2010).

Grace Potter and the Nocturnals