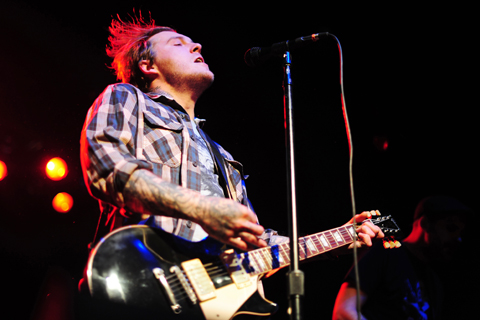 New Jersey waves came crashing down on First Avenue, Thursday, February 28 when Garden State heroes Bouncing Souls and the The Gaslight Anthem came to town, each with their own brand of punk in tow.

It was a stacked lineup—both bands headlined in Minneapolis this summer and only a couple weeks apart. (My reviews are here and here.) Overwhelmingly the sold out First Avenue was stuffed with older Gaslight Anthem followers, though they took to Bouncing Souls as well as any mohawked fan might.

Though the night was hyped as an East Coast pairing, the opener was charming Mississippi solo artist Cory Branan. He did drink from a red solo cup like some fraternity sideshow, but Branan took his acoustic guitar through less-traveled, rough-edged singer/songwriter fare—the contemplative to jangly love songs with drinking song cadence. All of it was often punctuated with frantic strumming and strings plucked like he wanted to snap them. Branan doesn’t break any new ground, but he deserves a serious listen by any fans of a man and his guitar.

Their choices of arrangement for The Misfits’ songs played out exactly the opposite as I expected. Bouncing Souls have largely stayed true to their pogo-friendly punk, only in recent albums mudding the waters a bit with pop and acoustic instrumentation. The Gaslight Anthem, however, fully embraced the early R&B and doo-wop influence of the Jersey Shore sound, following their punky debut, Sink or Swim. The integration of the Jersey Shore sound ranges from “Old White Lincoln” to “The Diamond Church Street Choir.”

Another oddity was the doubling of guitars with each new band—from Cory Branan’s one to the Gaslight Anthem’s four. The additional layers of guitar made each act sound bigger than the last. It was that size, along with the Gaslight Anthem’s execution, that made their set so strong. Not to equate thickness with quality, but midway through their set I ran through a list of active bands in my head, calculating where they fell. It’s the upper tier. Singer/guitarist Brian Fallon has a lot to do with that.

He came out hot. In their second song, “Handwritten,” Fallon’s first shriek of “Too many years to count!” made First Avenue gasp and wonder—should they sing along or just get out of Fallon’s way?

The contrasting look and sound of Bouncing Souls and The Gaslight Anthem, despite their shared home and influences, is obvious. Though I enjoyed their show this summer, I criticized Bouncing Souls’ energy on stage. Weren’t these the same guys who made “East Side Mags?” (Which I’m still waiting to hear live.) Still, they make punk performance look nearly effortless—for good or bad.

The Gaslight Anthem, aside from the added instruments, creates a large on stage presence by combining equally flawless performance with burning calories. Brian Fallon’s the heart of the whole thing, bearing his teeth and whipping his head when his lyrics or the swell of a chord progression moves him. He’s the avatar through which their songs come to life.

It was during Fallon’s shriek in “Handwritten” that the dirty blonde hair falling across his face, his unbuttoned flannel shirt, and the raw emotion of his songwriting conjured West Coast rock hero Kurt Cobain. Just drawing that musical connection is fodder for another article.

But that image stuck with me, despite their many differences, because of Fallon’s ability to bring his stories to life, without filter. And what’s more Jersey than that?

“Here Comes My Man”
“Blue Dahila”
“Astro Zombies [The Misfits]”
“Here’s Looking At You, Kid”
“Baba O’Riley [The Who]”