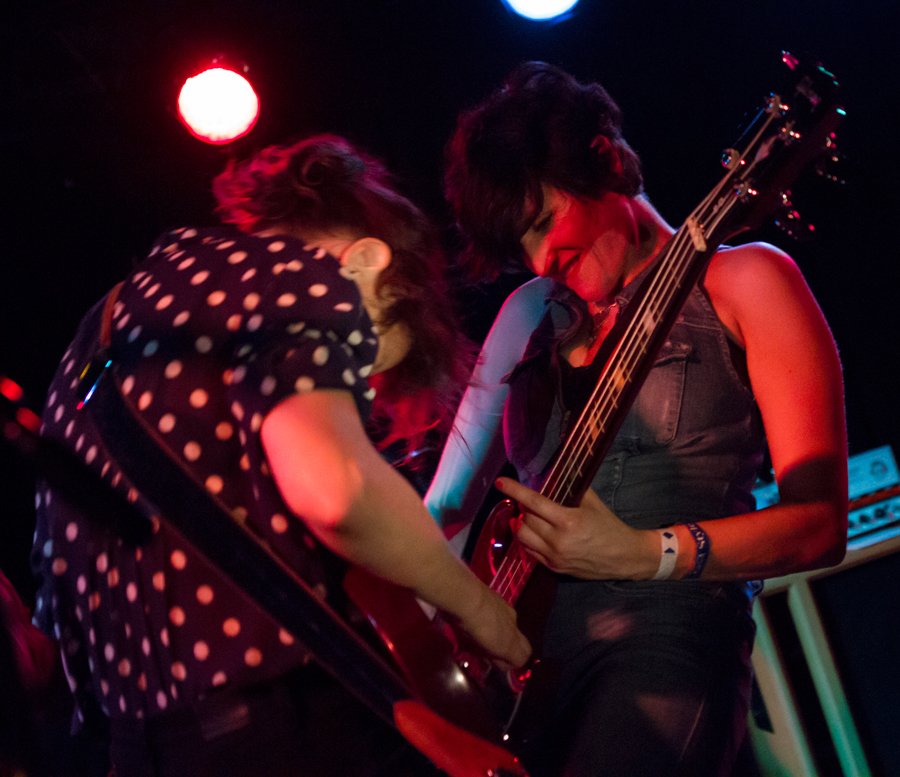 One thing was very clear by the end of the Ex Hex/Speedy Ortiz show October 24 at the 7th St Entry, Ex Hex is a big enough draw for the show to have been at a larger venue like the recently re-opened Turf Club. The two bands appear to be switching off headlining duties, but more people had definitely packed into the Entry to see indie rock mainstay Mary Timony and her new trio with bassist Betsy Wright and drummer Laura Harris. The venue probably wasn’t nearing capacity, but there were enough in attendance to make it a little uncomfortable. Despite that, the crowd danced feverishly through out Ex Hex’s brief middle set as they put on an professional, energetic performance of pop-rock punk.

There’s something to be said for the fact that Mary Timony has been involved with one of the best albums of 2011 with Wild Flag’s only album, and now in 2014 with the new debut Rips. Similar to her peers J Mascis and Tanya Donelly, Timony is currently making some of the best music of her career. Maybe there’s something in the water in New England, maybe there’s something in the Boston connection (even if Timony has relocated back to Washington, DC), but their current output is as good as, if not in some cases better, the late ’80s/early ’90s work that brought them initial recognition. Maybe they tapped into something new they didn’t know they were capable of doing. Maybe these are all just veteran musicians who have a full toolbox of artistic tricks to express themselves and makes a firm connection with their ageing audience (which I’m firmly a part of), all the while drawing in a newer, younger fan base as well. No matter the reason, we’re all better off that they keep coming back and that Dinosaur, Jr, Donnelly, and now Ex Hex are as good as they are.

Ex Hex’s album Rips is a masterful take on ’70s power pop/punk rock/new wave. People find punk touchstones in Harris’s drumming, classic rock tendencies in Timony and Wright’s skilled fret work, and a power pop sheen to the production and performances. The riffs are bouncy, and the beats are contagious and fun—and there’s a tiny bit of lewdness in all the right spots. They opened with the first single “Don’t Wanna Lose,” with the perfect mix of staccato reverb drenched chords slipping into a bouncy, driving beat. The overall sound for the set was nearly radio perfect, though when it came time for Wright’s lead vocal turns on “How You Got That Girl” and “Radio On,” she was buried more in the mix than Timony. Which was disappointing, as “How You Got That Girl” is one of the best songs on a brilliant album —an excellent response to or recast of The Cars’ “My Best Friend’s Girl.” In some alternate universe, every song off the album is a classic rock radio staple.

They played almost the whole album, but dropped “War Paint” for a cover of mid ’90s Boston area band The Shods’ “All Kinds of Girls.” The song’s Brownsville Station meets punk vibe perfectly nestled into Ex Hex’s arsenal. “The Beast” was stretched out from the moment it started, as Timony teased the opening guitar squeal over and over. At some point during the song, things turned into the band’s best Led Zeppelin impression. Timony’s a skilled guitar player whose playing was a highlight in Helium and Wild Flag, and while those bands had a bit more room for exploration, most of Ex Hex’s songs are too tight for that. But the extension of “The Beast” felt natural and needed with Timony’s fine playing giving way to an excellent bass solo by Wright and back to Timony again. All night the two egged each other on, standing inches apart and playing at each other with abandon. It was Ex Hex’s show, we were all just along for the ride. They were going to have fun whether we cared or not. Luckily we too were having, in a brief comment to the crowd Timony acknowledged this, “You’re awesome. I look out and all I see are smiles.”

Speedy Ortiz is a wonderful mish-mash of ’90s indie rock. A dash of Pavement, a little Built to Spill, a smattering of Superchunk, a tiny pinch of Liz Phair, with a healthy dose of Archers of Loaf. Squalls of feed back permeated the set, and it was a ’90s slack rock dream. The moment they hit the stage thought, they were apologizing for the fact that second guitarist Devin McKnight was sick and for the first time they were attempting their songs as a trio. The only way you could tell they were nervous was frontwoman Sadie Dupuis comments to the crowds of how she had no idea how the songs were going to sound. To their credit, had you walked in and never heard any of Speedy Ortiz’s songs before and they never mentioned this was all a new experience to them, you wouldn’t have known anything was missing. This is not to take away from the six string mayhem that Dupuis and McKnight get up to when they’re in full force, but to acknowledge the musical prowess of all members of Speedy Ortiz.

Unlike the clarity of Ex Hex, Speedy Ortiz relies on layers of noise and laid back but complex angular riffs with a thunderous beat. On record, Dupuis has a slight Liz Phair edge to her voice. Maybe out of nervousness, maybe due to the feedback, maybe due to the overall stage mix, her voice was frequently lost among the noise. That doesn’t mean they didn’t give it everything they had. “American Horror” and “Cash Cab” worked quite well

Local openers Buildings add to the mix of ’90s indie rock sounds by bringing a little Fugazi, a whole lot of Jesus Lizard, and a touch of Helmet to their set. The bass was metallic, melodic and stalking. The guitar work was a devastating weapon that alternated between neat precision and bombastic sprays of noise. The vocals were intense and drifted somewhere between hardcore and the cookie monster bark of some metal bands. They were a perfect storm that won the crowd early on, something massive to latch on to.