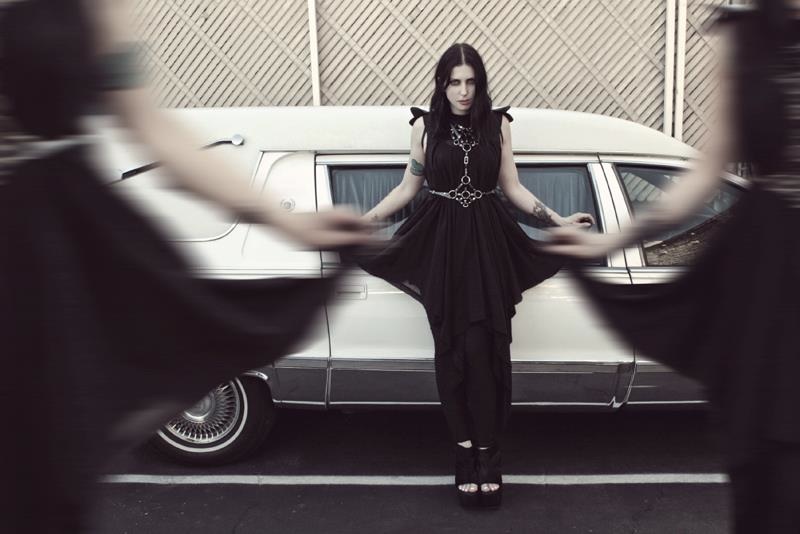 Judging solely by their name, you’d probably guess that King Dude are some kind of garage surf band from the heart of California. And if you guessed that, you’d be completely wrong. King Dude are in fact a gritty gothic folk band whose home town is Seattle. At least you guessed the right coast.

TJ Cowgill, the King Dude himself, handled the main vocals and lead guitar while Nicholas Friesen backed him up on drums and later melodic guitar. Before King Dude even got on stage, I knew that I was in for something dark and moody. The atmosphere was set by a few small candles flanking either side of an American flag painted black. The flag, as I’m realizing now, pretty well-represented their performance. They stuck to traditional folk themes such simple chords and basic melodies, but these were painted black with a coat of sooty vocals and a dissonant twist. Despite the fact that I’m usually drawn towards music interlaced with darker feelings, I didn’t find myself to particularly like King Dude. There are certain factors that need to balance out within a band. If the music is simple, the lyrics have to be fantastic. Or if the lyrics are weak, then the vocals have to have a surprising twist. Something has to balance the performance out, but King Dude wasn’t balanced. Their music was simple, their lyrics were generally unoriginal, and their vocals were, well, unique, but not overall impressive.

The thematic content of King Dudes’ music centers on things you’d expect to find in a goth band’s repertoire: the devil, death, graveyards, blood, shadows, blackness, and paleness. Almost every song contained some sort of reference to Lucifer (or the variants thereof). Either they chose a thematically bland setlist, or their music just does not have a range of topic matter. Though I didn’t particularly enjoy their performance, I didn’t hate it either. King Dude were… nice, but for some reason I was left expecting more from them. I am not going to pretend that I have extensive knowledge of King Dude’s music, and I’m sure there were people there that thoroughly enjoyed them, but they were just not necessarily my cup of tea. The crowd—by the way—was by far the most goth crowd I think I’ve ever seen. There were so many goth couples getting cuddly to songs about Satan.

Chelsea Wolfe was the next and final band to grace the stage for the night. I’m going to interject my own review and say that Wikipedia describes her as “drone-metal-art-folk.” Genres, man. Anyway, the show began with a swaying and trance-inducing song that included several of Wolfe’s more interesting vocal tics. Something I love about her voice is how you never expect what is coming next. When I’m listening to a song of hers, whatever note I think naturally comes next is always the opposite of what she actually sings. I’m always enamored by singers and artists who do something that is unexpected. There is no set formula to achieve this unexpectedness, but Chelsea Wolfe has definitely figured it out for herself. All of the songs that she performed were very hauntingly beautiful in their own ways. Although they were not all sweeping grandeur like the content of Apokalypsis, they all shone beautifully. In fact, the only song that she played off of the album was “Mose,s  and even then it was arranged in a simpler, but in an equally lovely way.

After the first song was finished, Chelsea apologetically notified the crowd that she was “really sick.” If she hadn’t said anything, it’s likely that no one would even notice her ill state. Her expansive vocals rang out strongly through the room. The only time where it was obvious that she was sick was when she had to stop a song in order to cough. The crowd started to applaud to encourage her and let her know that we didn’t mind the pause, but then it felt weird because people were applauding her while she was coughing…

Wolfe was not the only one on stage, and was accompanied by Andrea Calderon on violin and harmonies, and Ben Chisholm on the synths. The three made out to be an effective trio, complimenting each others’ tones in just the right ways. For their 7th song of the night, Chisholm and Calderon exited the stage while TJ from King Dude accompanied Chelsea to play a piece called “My Mother Was the Moon.” The song was a King Dude original and surprisingly contained no references to the devil. It was instead, almost a lullaby, telling an echoing story of a spider and the moon. The song is originally written and performed by TJ’s wife (and I really wish I could find her name but I can’t and I really really hate just calling her “TJ’s wife”). Chelsea, when she sang it, made it into a clear and refreshing track that could lull anybody blissfully to sleep.

My only complaint about her entire performance was the point of climax in the setlist. It was just a little too early on to really work the crowd in the best way. The set however, ended beautifully with Chelsea doing a cover of Sibylle Baier’s “The End” and an encore performance of a chillingly beautiful a cappella track created through the use of live looping. After not having been to a concert in a while (yeah, a month is a while for me), this was a completely satisfying show to come back to.