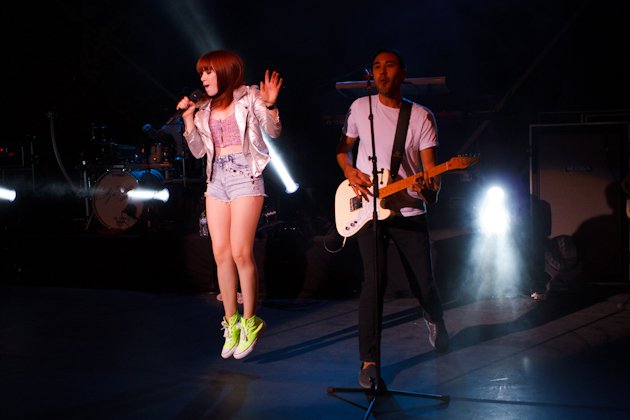 On concert nights during the Music in the Zoo series, kids are typically exiting the Minnesota Zoo as adults are just arriving to get their groove on. It was almost the opposite scene Sunday, August 18th as parents were dropping their children off to see Carly Rae Jepsen and The Wanted. In fact, they were lined up by the hundreds waiting to get their scream on as for many of the five to 15 year-old mostly girls, it would be their first concert and one that may set future expectations high.

The Wanted came on first and left no doubt that they are in fact “wanted.” They played an hour long set that resembled Beatlemania at times as fans were right in front of the stage screaming and reaching out to the boy band, who is no stranger to working up this sort of frenzy. During “Heart Vacation” each of the five singers chose a lucky girl to join them on stage and when handed the microphone to help sing along, some of them were too overwhelmed to utter a sound. The band in fact sounded great and the vocal harmonies were solid as the boys flirted their way around the stage and out into the audience giving up hugs to every fan in their path.

A standout moment was their clever medley of songs written by The Killers proving that in addition to being music performers, they are also fans themselves. A song they wrote for charity “Gold Forever” had the crowd singing along and seemed to be a fan favorite. After praising the audience for being the best they’ve had in a long, long time, they finished their set with the appropriately titled “Glad You Came” and had fun spraying fans up front with silly string.

Carly Rae Jepsen finally took the stage with an energy that matched the crowd’s enthusiasm as she started out an hour long set with one of her most popular songs, “This Kiss.” The fun upbeat tune is built around a dance beat familiar to most of the tracks that would follow. Although she busily moved about the stage from side to side shaking hands with fans, she was easy to track in her shiny silver jacket and fluorescent yellow Converse. Occasional jumping and funky dance steps didn’t disrupt her impressive vocal performance, which mostly sounded as good as the record. Also adding to the show’s entertainment value was high-tech stage lighting and some special fun effects including a confetti streamer blast at the beginning of “Tiny Little Bows.”

Before some selections like “Sweetie,” Jepsen spoke about the inspiration behind lyrics mostly having to do with her relationship experiences, which she had to admit many of her fans were too young to relate to. Commenting on the intimate feel of the venue, she felt it was time for something more acoustic and played one of the best sounding songs of the night “Almost Said It.” The slowdown was short lived as revenge was the next topic that inspired some fist pumping during “Tonight I’m Getting Over You,” before she invited two lucky fans on stage to be backup dancers on “Hurt So Good.” One of the standout moments came when Jepsen asked the crowd to hold up their phones and create a sea of light that remained throughout an inspired performance of “Heart is a Muscle.” Saving the best for last, she invited three girls onto the stage who were celebrating birthdays and as a gift, launched into her breakout hit “Call Me Maybe.”