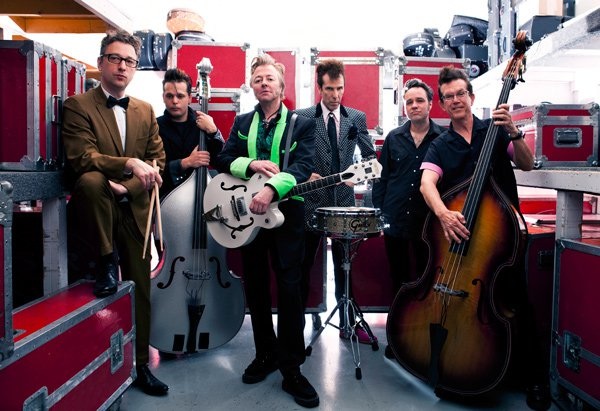 What better place for Brian Setzer and his 18-piece Orchestra to kick of their ninth Annual Christmas Rocks! Extravaganza tour then at the historic Orpheum Theatre—a gig walking distance from the home of the now-Minnesota resident for the past 10 years. The hometown crowd expressed their appreciation of Setzer with a sold-out show made up of a diverse group of fans who came anxious to get in the Christmas spirit by means of Swing, Jump Blues and Rockabilly music. The performance held on Saturday, November 17 was the first of 26 scheduled shows in the U.S. winding down on the West Coast just a couple days before Christmas.

The mood of the performance was established upon walking into the theater seeing the stage festively decorated with a giant snowman holding a candy cane on one side and Santa Claus with a bell and stocking on the other. Additional signs of the season packed the performance area including oversize nut cracker soldiers and four large Christmas trees with wrapped presents underneath. The horn sections were set up with a row of 5 seats stage right and 2 rows of 7 more seats on the left, each with Christmas stocking hung bearing the BSO logo. The drum set was in the middle on a tall riser with Setzer’s vintage Fender amps stacked in front of it center stage.

The real magic happened when the house lights went dark and the audience cheered as the band began to appear on stage. In addition to the colorful stage lighting, the trees and presents below were aglow and a massive backdrop was lowered painted in the style of the Boogie Woogie Christmas album cover. The orchestra was dressed in sharp black suits with matching silver lapels and skinny tie, accessorized with a traditional red and white Santa hats. Entertaining string bassist Johnny Hatton used his Santa hat like a tree topper on his tall acoustic bass. Backup singers Leslie Spencer and Setzer’s wife Julie, referred to as the Vixens, wore velvety red holiday dresses. Setzer himself clearly stood out as the band leader, looking dapper in a black suit, silver skull and crossbones bolo tie and his custom red sparkle Gretsch arch top hollow body.

The first selections of the evening were BSO versions of traditional Christmas favorites like Sleigh Ride, keeping with the theme of the show. It wasn’t long, however, before they mixed in Rockabilly inspired tracks like ’49 Mercury Blues. Setzer remarked, “I’m warmed up now boys, let’s rock it” as he really kicked the show into gear with This Cat’s on a Hot Tin Roof. This song was a standout with a tasty solo, a sure thrill for the many fanatical guitar players undoubtedly in attendance. It was back to Christmas music as a new back drop lowered down and Setzer switched to an identical Gretsch with a green sparkle finish asking the audience if they were ready for the Boogie Woogie Santa Claus? It was so fun to watch Setzer showing off how good his band is, pointing at one side of the horn section when he wanted a saxophone solo and then perhaps to the other side for some trombone. The Vixens got to shine on Stray Cat’s hit and notable crowd favorite Sexy and Seventeen, another great moment.

Taking a moment to joke with the crowd, Setzer asked, “Have you seen that Justin Bieber lately with the blond pompadour haircut?  I’ve been rockin’ it since the 80’s.  You can steal my guitar, but don’t steal my haircut.” The comment seemed fitting as they launched into one of his biggest tunes from that era, Stray Cat Strut. Note for note, the guitar solo is such an important part of this song that it earned a ranking in Guitar World magazines top 100 solo’s of all time. They were even able to work in the Christmas theme with a visit from the Grinch. Setzer’s creative instincts shinned during Drive Like Lighting as he playfully inserted the Adam’s Family theme, while Honey Man allowed a glimpse of his effortless ability at blazing speed on the Flight of the Bumble Bee lick.

A giant BSO martini glass logo was now the backdrop as we got to appreciate Brian’s great singing voice and the Vixens’ beautiful harmonies on the traditional Christmas hymn Angels we have Heard on High. From this point on, the energy was raised up a notch with one of the most anticipated songs of the evening Jump, Jive and Wail. In addition to a great back and forth solo between guitar and sax, accomplished drummer Daniel Glass was really in the pocket nailing the big band groove.

The orchestra disappeared from the stage as Hatton and Glass joined Setzer up front for a straight up Rockabilly set. The look was complete with Hatton standing up playing a simple bass drum and snare setup with an orange flame over red sparkle paint job to match Glass’ standup bass. They kicked it off with Run Run Rudolph and were joined by the Vixen’s for Blue Christmas. After Hatton jumped up on his bass for an ambitious slap style solo during Fishnet Stockings, Setzer followed his lead jumping up on the drum set triggering the whole audience to get out of their seats. The orchestra reappeared in leopard skin pattern suit coats as Setzer called out, ”Minnesota, don’t sit down, where gonna Rock this Town!” to end the set with a bang. A large roar from the audience encouraged Setzer back out for a more than substantial encore consisting of the Nutcracker Suite, Getting in the Mood and Jingle Bells.

Supporting act for the tour Totsy (totsyband.com) provided an entertaining start to the evening with their unique burlesque inspired cabaret music.  The group’s style is perfectly suited to lead singer and former BSO Vixen Beth Curry who possesses a signature vocal sound and is a seasoned entertainer. In addition to having their own Christmas song Santa Likes Naughty Girls Too, they had stand out moments with Dope on a Rope and Red Balloon.