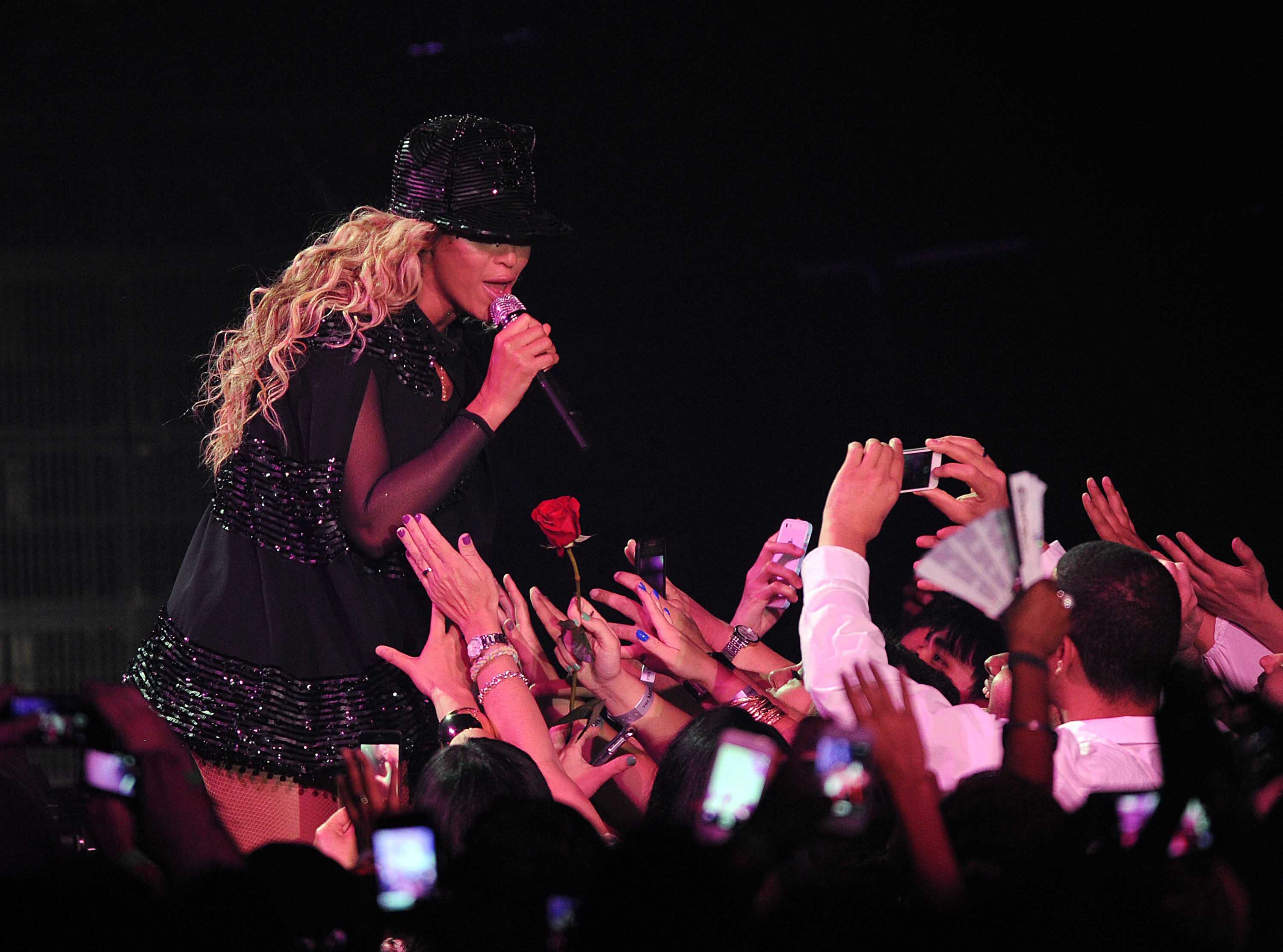 Beyonce brought her Mrs. Carter Show World Tour to the Xcel Energy Center in St. Paul on Thursday, July 18th. She put on a non-stop, two-hour set, which left her fans dripping in sweat, hoarse, and loving every minute of it.

A black curtain, with an ornate wreath surrounding a backwards capital B, fell from the rafters after opening act, Luke James, left the stage. The crowd shrieked as the lights dimmed and a video screen the length of the stage, slowly crept into view. A steady drumbeat became familiar to fans and then, darkness.

Beyonce appeared in a single spotlight, donned in all white. Her hair was blown perfectly into place by electric fans surrounding the stage, while she opened with “Run the World (Girls).”

“I just want to give you everything I have,” Beyonce quipped, reminiscing about the joy she felt when she saw her favorite musical acts perform live. “I respect my job.”

After running through, “End of Time” and “Flaws and All,” Beyonce disappeared for what would be the first of some six-outfit changes. During the short breaks, the huge video screen would show pre-recorded footage of Bey’s portrayal of various groundbreaking women throughout history. These vignettes furthered Beyonce’s message of empowered women changing the world, or at the very least, their own world, for the better.

In front of an 11-piece all female band, a slew of talented dancers, and a marvelous lighting set-up, Beyonce rocked fan favorites and even a few underground hits.

“My big, big fans know this one,” she stated before jumping into “Schoolin’ Life,” off her latest album, 4. Everyone in the place sang along.

Beyonce reappeared again in a purple sequined jumpsuit before she climbed atop a grand piano that sat stage right. Writhing on the piano, she belted out, “1 + 1,” with a three-piece horn section stage left. As the song came to a close, she strapped herself into a harness that lifted her up and sent her floating across the floor seats to a second stage.

Under a ring of lights on the second stage, she giggled with fans, giving them an opportunity to sing the opening to her song, “Irreplaceable” into the microphone. Fans giddy with excitement shouted, “to the left, to the left,” when given the chance.

Flying back across to the main stage, Beyonce received one of the loudest crowd reactions of the evening when the first few bars of “Crazy in Love,” blared from the speakers. In a new outfit, she gave the crowd exactly what they wanted, rattling through, “Survivor” and “Single Ladies.” Everyone twirled his or her ring finger hand high into the air throughout the latter.

Finishing with a touching video that showed Beyonce and her daughter, Blue Ivy, Bey said in the piece, “Time is so precious, so love now, love always.”

For an encore, she came back out to perform an acapella version of the Dolly Parton penned, “I Will Always Love You.” With gold confetti floating in the air, she closed the night with her mega-hit, “Halo.”

Genuinely smiling and enjoying herself throughout the night, the Houston native took the sold out crowd on a feel-good, high-energy journey that they will not soon forget. With her amazing voice, fantastic dance choreography, and an extensive wardrobe; Beyonce has cemented her place as one of the greatest performers of our generation. Mrs. Carter is a must-see live.

Xcel Energy Center is located in downtown St. Paul. Opening its doors in 2000, it is home to professional hockey team, the Minnesota Wild and National Lacrosse League member, Minnesota Swarm. It is a wonderful place to take in a live show, with really not a bad seat in the house. Upcoming musical acts include Mumford & Sons, Taylor Swift, and Michael Buble.

In the downtime between opener Luke James and Beyonce, fans were treated to various Beyonce commercials on screen and banging hip-hop songs by Drake, Juicy J, and of course husband Jay Z. The fun-loving crowd of young and old danced and rapped along to most of the songs, some even garnering attention and applause from onlookers.

“I Will Always Love You”
“Halo”