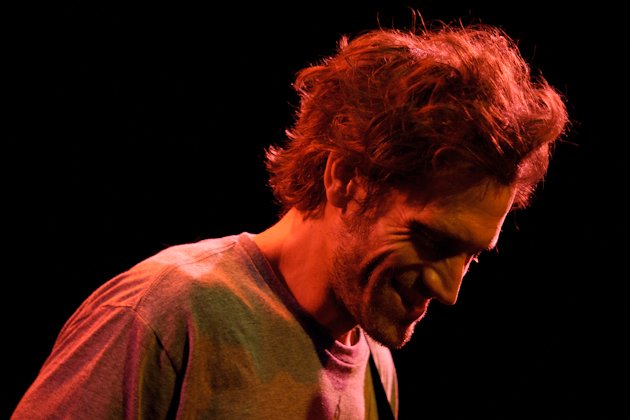 A nice size crowd came out to the Cedar Cultural Center on Thursday, August 15th, many seemingly unsure what to expect from Ben Taylor. It was obvious many in attendance are fans of Ben’s famous parents, James Taylor and Carly Simon. It didn’t take long to get the sense that growing up for Ben was probably a little different than what most of us experienced, but where there are advantages and opportunity there is also great expectation and challenge.

Taylor’s performance began in a folky vibe stylistically like his father’s music and he joked, “This is some James Taylor shit.” Unlike the last time he came to Minneapolis with a full band, Taylor performed two sets of music alone with his acoustic guitar, a laptop and some mixing equipment to fill in instrumentation where he chose fit. You can hear some of his parent’s musical influence in his voice and acoustic performance, but he also clearly demonstrated that he is his own talent and offered up plenty of his personal style as he mixed in electronic sounds. Taylor skillfully used technology to build melodies and create his own harmonies, mixing parts in and out as the mood struck him.

Taylor proved to have a ton of personality and seemed very at home on stage. He playfully thanked people for coming out to the “Ben Taylor Variety Show” and frequently had the crowd laughing with the stories told to set up each song. Taylor’s performance was genuine and it all made for an entertaining evening and solid performance that gave fans some of what they were hoping for plus a new dimension to enjoy and appreciate.

The evening’s supporting act Grace Weber could almost be considered a local artist from nearby Wisconsin and had some family in attendance. Backed by a three-piece acoustic style band, Weber showed off some real vocal talent. She has a surprisingly rich and soulful lower register, but also showed off her range hitting the high notes with power. Weber performed mostly her own compositions and earned a positive crowd reaction. Shows like this are what make the Twin Cities music scene so rich thanks to the efforts of Sue McLean & Associates.