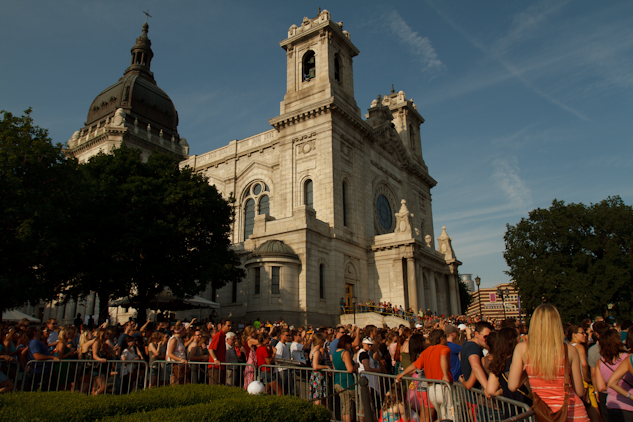 It seems fitting that the Basilica Block Party has become a cornerstone of the Minneapolis summer outdoor music festival season, considering it started out as a means to raise money for a structural renovation project on the historic downtown church. For nearly two decades, everything about the event has grown including sponsorship (Cities 97, Bud Light, Sun Country), enabling a bigger name lineup (Matchbox Twenty, Grace Potter & the Nocturnals, Goo Goo Dolls) resulting in a greater number of returning fans willing to pay a higher ticket price to support a good cause.

Even with the huge sold-out Country music show down the street at Target Field, there was no shortage of people who came out to “Praise the Loud” at the Basilica Block Party. Music at the multi-stage event kicked off immediately as “Southwire” was performing while people were let in through the gates at 5:00 pm. Block party regulars hurried in and headed directly to secure their favorite spot from years past on the lawn, the steps of the Basilica or as close to the front of the stage as possible. Los Angeles Indie band Family of the Year brought the Jefferson Bus Line stage to life with a performance as bright as singer Christina Schroeter’s fluorescent yellow colored hairstyle. The biggest crowd reaction could be felt during their best known tune “Hero,” which has gotten a good amount of airtime on Cities 97. The headlining Sun Country stage got off to a solid start with the throwback 60’s soul sound of Mayer Hawthorne. The vibe just felt good and had pockets of people dancing to fun tunes like “The Walk.”

Back at the JBL stage, new-comer ZZ Ward was making a real impression with one of the standout performances of the evening. Popular musician and Cities 97 DJ, Keri Noble praised the band during her introduction saying they have one of those rare albums where every song is good. Ward backed that statement up with a memorable performance of “Put the Gun Down.” Father John Misty was next up on the headlining stage and has good momentum in the Twin Cities after his recent First Avenue performance. His psychedelic Folk Rock sound translates to the bigger stage surprisingly well fueled by Joshua Tillman’s passion for performance and his silky smooth vocal. A popular choice to close top off the day’s entertainment on the JBL stage, Matt Nathanson proved he has an established fan base here in the Twin Cities. People were packed to the edges having a good time singing along to favorites including “Modern Love.”

To cap off the evening, the main attraction Grace Potter and the Nocturnals blazed onto the stage with the kind of fury they are becoming known for. Potter, dressed in a sparkly white robe, looked like she could be an angel on top a Christmas tree, but quickly contradicted that impression with her racy stage presence. Last year at this time, they were opening for Kenny Chesney, which put an ironic spin on their headlining performance at Basilica the same night he was back performing in Minneapolis. The band rocked the block hard with hits like “Paris (Ooh La La)” and showed off Potter’s stellar vocal’s on smooth ballads like “Stars.”

Although it did not feel much like summer, the rain stayed away and the lineup for day two at the Basilica was plenty bright. To kick things off, one of the best known bands on the Minneapolis scene Cloud Cult put on an artistic performance at the JBL stage, which even included a little painting project on a spinning canvas. Over on the Sun Country stage, Kate Earl showed she’s getting “Stronger” as the title of her current album states. Although her material has a mellow groove, it rocked enough to warm the crowd up for what was to come next. The Goo Goo Dolls followed in a big way and drew the biggest congregation of viewers for the whole event. It was literally jam packed from front to back and side to side for the hour plus high-spirited performance. John Rzeznik and Robby Takac were their energetic selves jetting back and forth across the stage and appeared to be in their element really having fun with their success. They played a nice mix of tunes from their career including many new and old hits like “Rebel Beat,” “Broadway,” “Black Balloon,” “Name” and “Iris.”

The JBL stage kept the Cities 97 listeners interested with an anticipated performance by “Walk the Moon.” With an upbeat 80s-inspired sound, this group is just fun and conveys an energy that surly attracted some new listeners. In place of Sharon Jones and the Dap Kings, a good genre match Raphael Saadiq delivered some serious deep Soul. Best known for his days with “Tony!, Toni! Tone!”, Saadiq has collaborated with many of R&B’s best and showed off his talents on tunes like “Love That Girl” and “Good Man.”

All the stars were aligned as the skies finally cleared resulting in a nice comfortable evening as Matchbox Twenty anchored the event with a crowd-pleasing, two-hour performance. Rob Thomas commanded the stage in usual fashion and once again proved he’s got the voice to back it up 100%. This is just one of those bands that seems like they’ve always been around and you take them for granted, but you are pleasantly reminded of their significance as they pound out hit after hit. Everywhere you looked people were having a good old time singing along to favorites including “Push”, “Bent” and “3 am.”